Prove me the capabilities of the aeros. Without asking extraordinary things, I am still sorry that I cannot record more than 2: 30min.

Have you tried mono?

If you feel this way, imagine how we feel!

I didn’t say that I liked everything in the proposal, far from it, but you cannot deny:

As such it cannot be rejected as a whole. Of course the details have to be carefully studied and even if there are many things that I do not need at all in the proposal (like chaining songs for example. I prefer to have a quick and efficient navigation mechanism between songs. I mostly do not record anything apart from temporarily keeping an idea, and I use the looper as a looper and basically recreate all my loops live every time and if I want to use a backing-track then I just use a backing-track, not a looper), I can understand some of the needs and at least see the goal.

The proposal states a number of interesting ideas and some less imho:

I don’t think the Aeros will be changing from max 6 tracks.

I never requested more than 6x6. Honestly I think that if you need more than 6 parts in a song, you’d really better consider doing that in a DAW (ableton live + pads and midi switches for example… or ALK2 from zenaudio which seems pretty interesting) yet the idea of being able to define a matrix from 2x2 up to 6x6 has been proposed numerous times on the forum and it definitely sounds like a good idea… I will try to issue a consistent proposal on this specific subject, as I would like to see something a bit more dynamic than just a song setup parameter. Stay tuned

Depending on the songs you can have a part or 10.Musically I do not understand to impose 6 parts.

I think you can see in my previous reply to @BrennanSingularSound about this… If you produce live songs that have more than 6 parts or so, then you should probably find a great interest in turning to live oriented DAWs. I agree with him, that this is a pedal we are discussing about.

I will try to issue a consistent proposal on this specific subject, as I would like to see something a bit more dynamic than just a song setup parameter. Stay tuned

Good news (for you

). After reviewing more in detail the 6x6 mode, apart from the non-compliance with the Master Rule (i.e. time-sensitive commands bound to on-press events only) that is still to be fixed, I think that I kind of like it as it is… modulo some pending requests, in the end my concerns are pretty minor or already discussed elsewhere.

@BrennanSingularSound
Of course we are discussing about a pedal. I do not understand the limit of parts, it does not require any additional resources. So what’s the point? To say that we set limits because it is a pedal? let’s see, this product came out with a big screen, touch screen, a wheel, it is innovative and you explain to me that 2:30 per track and 6 parts maximum is good? Take a jamman, see how many we can record and how many we can chain together.

EOL management is an interesting point. I don’t understand why this is not part of the song config in the proposal. It would just be an extension of the existing setting… I didn’t think to it myself as a song config, as I was only focusing on the possibility to fade out, and as such was more thinking about it as a live setting (during the loop session). Definitely a topic to address.

Laurent, as I mention on the bottom of the draw, EOL performance mode, it’s made to be accessed and modify quickly live (what I call performance). This page could open an infini possibility of « effects » to finish a song.

Ok, I absolutely didn’t understand in the first place that, within your chart, the EOL configuration screen as well as the Mixer screens were actually meant to be triggered from elsewhere than from the screen represented on your chart (i.e. when a song is stopped or not yet started). The fact you have been choosing this picture to represent it was probably misleading, at least for me: 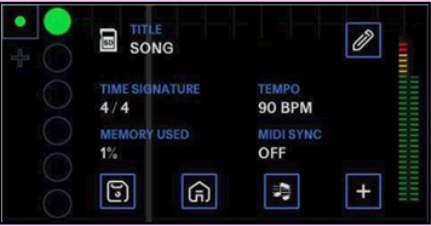 Now I realize why you have called it the “looper mode” whereas for me it was simply the “Main screen”… and it definitely makes more sense at least for the EOL screen.

But this triggers then some new tough questions as well.
If now the state you represent as the “looper mode” shows the functions attached to the buttons even during a loop session then what about mute/unmute (relegated to the mixer screen ??), undo ? And how do yo manage the transitional states where today you can cancel rec or cancel next part… ?

My position to respond to a logical worflow and direct commands (for all actions that require instant execution, play / stop / rec / …) was to divide the “pages” into five families (this is explained in bottom of the diagram).
-looper mode (play rec …)
-mixer page (mute unmute volumes pan …)
-EOL (fade chain effects …)
-song management (files management …)
-settings (all adjustments not necessary during a performance)

This is exactly where I think I start to diverge, when talking about core features relegated to secondary screens… But I could give it a try if everything else is consistent.

undo ?And how do yo manage the transitional states where today you can cancel rec or cancel next part… ?

You actually didn’t reply to this. Please clarify, but for me looks like you forgot this part, and I don’t see where it could fit exactly. Even if cancelling recording or switching to next part before it actually occurs may seem a bit side features at first sight, I know I use that all the time. I didn’t really figure out an easy solution and I 'm not saying it’s not possible, but it’s missing in your proposal.
The undo is a very important and core flow. I couldn’t find anything related in your proposal.

Then on a more practical/ergonomic front, I would definitely vote for an inversion between the rightmost buttons in both the “looper mode” and “mixer mode” screens:

For mute/unmute, it’s better to affiliate this with the mixer to have a global view of track’s state.
For undo, if it’s compatible with the press mode of the « Rec/overdub » button , we can use the double tap fonction.
For the part erease, what do you think about an 3sec hold « next track » button with a confirmation message (because hold 1sec->next part)?

For the invertion, why not? I have small feet

For mute/unmute, it’s better to affiliate this with the mixer to have a global view of track’s state.

I see some consistency in what your saying, yet I don’t like the idea to have to switch to a secondary screen for such a core feature.

For undo, if it’s compatible with the press mode of the « Rec/overdub » button , we can use the double tap fonction.

It surely won’t. As discussed extensively here, if a button requires an on-press event, there is no way to have any secondary event attached to it (be it on-release or on-double-tap…).

For the part erease, what do you think about an 3sec hold « next track » button with a confirmation message (because hold 1sec->next part)?

I don’t really know why you are mentioning part erase, yet what you are saying is probably feasible although I don’t really like the idea of 4 actions bound to the same button. Starts being a bit messy.

I don’t think you understood what I meant by “transitional states”, so let me explain a bit further. Let’s take the example of “next part”. When you click on “next part”, and the next part actually already exists the button becomes then labelled “cancel next part” until the end of the current track to give you the opportunity to cancel the action before it happens. Same behavior exists for “cancel rec”… This is what I call transitional state. This is not managed at all in your flow.

Apart from that, another point that I noticed in your proposal is the fact that the “next part” button is attached to the on-release event which is contradictory with what we want (and actually already in test AFAU as per what @BrennanSingularSound said here).

In conclusion, even if liked the initial idea, the more I dig , the more I see problems that can’t really be addressed by this solution. But as I said earlier, this is not because the complete idea is not really feasible, that we have to get rid of everything, and there are clearly things like the EOL management that deserves having a much deeper look at…

with 4 buttons we will have to make concessions. You can’t have everything on the same page. For the function to cancel the change of share, I do not see anything else as a possibility.
There will have to be modifications for the play / rec / overdub / stop actions to be instantaneous.
About the press fonction and double tap, I’m surprised because a lot of looper have 1 button and sorts well (I have a jamais stéréo and there’s no problem).

Can’t wait the midi implementation to build my worflow on my soleman.

I’m not sure if I’m on the right thread or not. I seem to get lost in most of the technical stuff. I’m hoping there is a resolution to deleting songs. I don’t save any songs. I only loop live, therefore I have to use the delete function every time I start a new loop on the Aeros. As David mentioned it plays a half a second of the song. That would get pretty annoying for a 3 or 4 hour set.

I’m a live looper, too. And yes, it is annoying.

A trick in case you have not recorded all parts: Change part first to the next free one and press delete song now.

I just want to bring up, if for any reason your set-up does not require the Aeros to start or stop immediately (using the Play stop all button), you do not need to have a play stop all button set to Press in the main device settings.

The reason the sound happens is that the song starts on the press, and the hold is registered after the press. If you set the play stop all button to release, then it will not make a sound when holding.

Another user that would benefit from On Release being the default setting.

It’s not obvious that this setting would fix the issue of the sound playing for a brief period. But the reverse is true.