Inputting a mic will need a mic preamp - which one is best cheapest and portable?

the yamaha ag06 is portable and has two very good preamps installed what are your thoughts? it is only 1kg
also what are people’s thoughts on using audio interfaces with preamps built in like focusrite scarlett solo third gen?

The Rolls MP13 gets recommended by Singular and is probably about as portable and cheap as it gets (unless you need something that’s battery powered for portability). 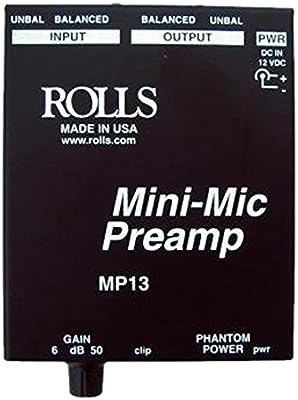 It would likely work OK with XLR connected dynamic mics and also condensers that don’t require a full 48v phantom (the MP13 only provides 24v phantom). It’s odd that Rolls has an 1/8" (3.5mm) jack for a mic input which the specs state as a TRS ‘balanced’ connection, as most typical mics with an 1/8" connection are not balanced.
Use a 1/4" TS to TS cable (unbalanced connection) to connect to the Aeros to connect it up.

I need batteries for portability so far my research has found art tube preamp $129 aud with 9volt outlet that I can daisy chain to is the jack to the aeros a normal guitar jack?

In case it matters to you, I’m using a TC helicon mic mechanic. It’s a mic preamp and vocal eq, reverb and pitch corrector in one.

That goes into the right channel of the aeros, with guitar in left, and then aeros out to two mixer channels for independent volume control. The stereo meter on the aeros acts as a nice method of seeing you’ve got a reasonable level signal.

My only slight caveat is that the mic mechanic, even though its specs say it outputs at line level, it would have been nice if it had a volume output control as well as a trim for input. It leaves the vocal level low relative to the guitar, and that might cause difficulties if you aren’t feeding into a mixer. Perhaps one day, the internal routing and mixing in the aeros will be powerful enough to compensate for that, but it’s hardly fair to put that on the aeros.

I found that the the v3 art tube mic preamp with a teyun a4 mixer got me to the point i felt confident enough to beat box which is saying something - perfect the only problem is that the v3 runs off 12 volts and is not portable it needs 9volt ac power - i am looking for something that is 9volt dc power thanks - I looked at all the reviews of the mic mechanic 2 and they didn’t jump out at me, I looked at three, you say it is a preamp but it seemed to miss the gain feature though that could have been part of the tone feature - still now I have experienced the v3 I am considering taking it back or just always having ac power on hand one for the amp and the second for the v3 thanks

How do you get 12 volt dc? I have 9 volt powerbank, but 12 volt is another level

I agree. I did mention that in my mini review as an explicit caveat.

It’s certainly a preamp because it’s mic level input, which on v1 had a trim, and on V2 apparently some sort of automatic setup. It then outputs at line level.

But as I said above, no output volume control, which I find frustrating when I’m using a simpler non-mixer
setup. I do like the tone and reverb out of it though, and the fixed gain is enough to get a noise free signal into the mixer via one of the aeros channels from a condenser requiring phantom power.

It’s a data point only. Only you know what’s gonna work for you though.

Since the Aeros has no effects, I would choose some kind of vocal effects unit. I use the old TC Helicon Voice Live Play, and the outs from this goes to the two main ins of the Aeros. My guitar effects pedal goes through the VL Play Aux, so that stereo guitar effects and vocal effects share the same Aeros main ins. That way I can use Aeros aux ins for my BeatBuddy. No mixer involved.

I purchased the Cioks DC7 Power Supply. It powers my BeatBuddy, Aeros, MidiMaestro, my guitar effects pedal, my 12v voice effects pedal, the headpone amp, plus it’s got a usb output that can power my phone or anything that runs on 5v.

looks very powerful, quite expensive, the v3 i just used needed 9volt at ac though lol I couldn’t do that but the preamp was perfect with a mixer

One note, if you’re going to use the Rolls pre, keep in mind that it requires a shifting 9 V to 15 V adapter, this is because the phantom power requires more voltage I imagine. Keep this in mind if you are going to get it, it is not going to be so simple to power without its original adapter.

You do understand the umc202hd may need a computer to power it via the USB connection and allow the audio to pass to its outputs(?). It can not be powered with a regular adapter.

Edit… I just powered up my umc404hd with its AC adapter and it does seem to work as a stand alone ‘preamp’. No guaranty the umc202hd would be the same though.

One other thing to consider if you’re going to input a guitar. Most guitars will sound better if plugged into a Hi-Z (high impedance) input jack. Some small mixers (and some interfaces) do have a switch that enables a Hi-Z jack connection such as shown below. 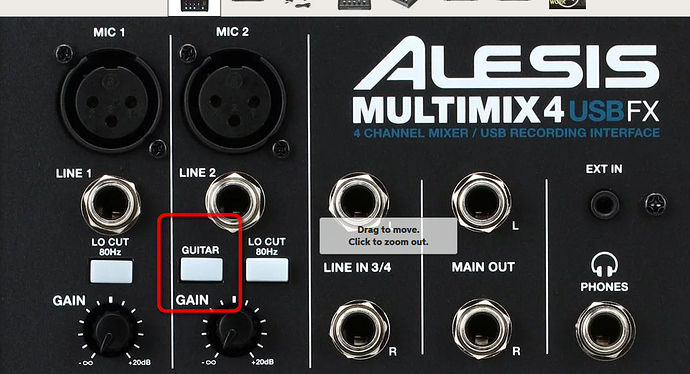 You might be able to power it using the proper USB power cable, as I do with some of my USB-powered devices. But I don’t know if the audio routing will work without a computer attached.

I suggest using a small mixer as the simplest/cheapest/quickest way to pre-amp and send multiple mics/instruments to the Aeros; even if it’s only one mic and one guitar…for now.

Before I started using a Scarlett 8i6 interface for all inputs and routing, I used a small mixer to pre-amp mics and instruments, then sent the stereo mix to the Aeros, then back to the mixer before send to amps/recorders. It worked well, especially with a band and especially on a budget.

I’ve always found the M Audio Audio Buddy to be a good unit for tis type of thing. I has two channels of input with independent gain control, ability to accept 1/4" and XLR inputs, and it can provide phantom power to a mic, if needed. It appears that they are no longer available new. but there are quite a few to be found in the aftermarket on eBay and Reverb.

Don’t know if this is of interest. A few years back I needed a mic mixer for a consumer grade camcorder. I found a used Marantz PMD-602A which is battery operated (4 AA’s) and could provide phantom power if needed (12v/48v). Works well with the camcorder and provides plenty of gain for a dynamic mic. I just plugged it into my studio utility mixers line inputs (1/8" TRS to (2x)1/4" TS) and there was plenty of gain to be had. The 1/4" TS inputs of the PMD-602A are 10KΩ, so kind of low ohms for good sound from passive pickups on a guitar unless using another pedal between. The batteries supposedly will power it for 15 hours with phantom off. I haven’t killed a set as of yet for the video shoots I’ve done and AA’s are fairly cheap in bulk from Amazon. Have not tried rechargeable batteries yet.
B&H Photo does have a couple used presently. 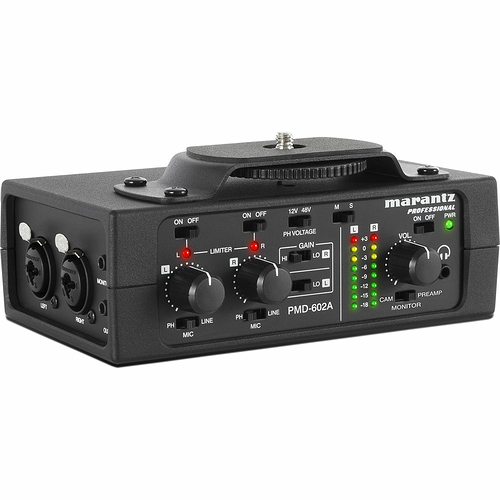 a powerbank powers the umc202