Is there a simple connection guide for the Aeros? I’ve tried a couple of different ways and I can see a waveform being recorded but can hear nothing on playback. Does it play back thru the amp or do I need separate monitors?

Your instrument or source goes to one of the inputs. You can connect the output(s) to the inputs of a mixer or a powered speaker or amp. Think of it like an effects pedal that has an input for your instrument and the output goes to an amp or similar.

If you don’t have the manual, it can be downloaded at https://singularsound.com/start#Aeros , although I didn’t see any connection diagram included.

This is a Digitech Jamman, but is pretty much the same for hookup as the Aeros 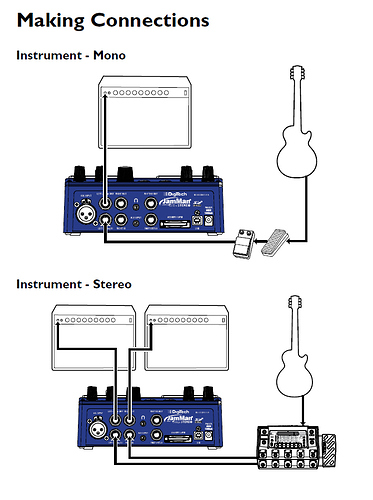 Got it, I’ve got the loops working now. I heard a click metronome in one of the ways I had it hooked up previously. Any ideas for that one?

@ejo3rd Likely, you had the Aux out routed to your amp, which depending on your settings, would include a click track/metronome.

@MarkF48 Thanks for helping him out.

Sometimes when we’re testing a product so long, aspects of it can become so second nature that we forget to include them in the guides/manuals. I’ll work on getting a connection diagram up before the end of the week hopefully.

Or is there a completely different cable required to pair these?

You need a standard midi cable.

So the Beat Buddy midi sync cable is not used in this case? And thanks for the help

This is a bug that needs to be fixed.

Seems like having the two devices talk directly in both directions would be the best possible integration. Both the BB and the Aeros have a lot of overlap in what they are trying to do.

Perhaps it’s a bit non-standard midi in how it handles messages (to avoid loops) and then there’s the question of how you handle midi through to other devices.

But once this happens you have 5 buttons and 2 “knobs” to adjust (or 7 and 3 with the addon footswitch/expression). That’s a lot of controls for a looper, rhythm machine.

I agree that a midi-thru would be good.

It turns out that the midi out is a midi thru.