I had posted this under general discussions, but since this may be a feature request, perhaps this is a better category

This could be a feature request if it is currently not possible :

With a song currently selected on the Aeros looper, with the song stopped, is there a way to select move up/down one song or get into song-selection mode with a footswitch ? I’d rather not need to bend down and press the song-selection icon the the pedal screen.

Also, can Beatbuddy send a next/previous song midi message to the Aeros ?

Does the Singular Sound support/development team typically comment on this type of feature request ? I haven’t seen such a response.

I don’t think I would want to purchase the Midi Maestro just for this one function.

I’m guessing an Aeros footswitch function to enter song-selection mode could be added as a long foot-switch press or double press ?

Hi. Can anyone offer a suggestion to me as to why there are no responses to this from Singular support ? Have I used the wrong forum ?

This is the right place. I think Singular Sound is at Winter NAAM and as they find time, they’ll try to answer. I know Support has been picking up some of the slack.

Thanks very much for that info.

Any updates on this question?

Hello! I had previously sent a message to Singular Sound regarding this topic and did not receive a reply regarding this topic. It was sent a while back with patch 2.11.1. Prior to that I e-mailed them in regards to possibly implementing a Part & Track Labeling system which they did reply to me about (I posted my thoughts on that topic in this forum so check it out if you haven’t already as I think it is an important feature).

Hello brave fellow Aeros users! I have purchased the looper several months back shortly after it’s immediate release and have been overall happy with the slow-going changes that are starting to happen. I personally do not use a beat –buddy or midi control, though I know many do and that has been a high priority for Singular Sound to iron out so I understand the slow pace of other issues. But with other features such as manual saving and the freeform mode (sync mode almost there, you can do it!…

Anyways, here is the message I had sent to Singular Sound on the subject of song selection using the footswitches. You may find it interesting or perhaps it will spark ideas superior to mine in order to achieve this functionality:

Hello! My name is Jason. I had previously sent a message regarding the possibility of a future update with PART/TRACK LABELING in order to better organize our loops. Thank you for your reply. I am excited to hear that you think this feature could be useful and may look into it as a future update once all the initial functions are implemented and running smoothly.
I had previously written this letter prior to the release of 2.11.1 but since its release a couple of my concerns have been answered so I am amending this letter to only address the possible ideas I have for future updates. I am writing for a 3 suggestions:

Clicking PAGE TWO takes you to another set of options: LOAD SONG, SAVE SONG, PAGE THREE

Clicking PAGE THREE takes you to another set of options: HOME SCREEN, NEW SONG, PAGE ONE

Once you make the selection of the menu screen as mentioned above you can use the wheel to scroll and highlight the options and make selections, click EXIT when finished. This is all dependant on the idea that the wheel can be used to scroll through all the options within the menus and highlight and select them. Footswitch commands would have to be added inside of every menu screen, perhaps as simple as two buttons (EXIT SELECT).

As I mentioned I know this would not be an urgent functionality that cannot be currently achieved through a few clicks on the touchscreen, but again, this would be very handy for live playing in order to totally eliminate the necessity to bend over between every song to get the next one set up. I believe in the past I had read somewhere that making the user interface more hands-free was something you plan for the future but I just thought I’d share my ideas. I know you have an expert team and perhaps you have ideas superior to this or if not you could use this as a platform to build ideas upon.
Please let me know if you think any of this could be possible for a future update. I look forward to hearing from you and I am enjoying using the AEROS and continually look forward to future updates to see what comes of it! Thank you for your time and consideration. 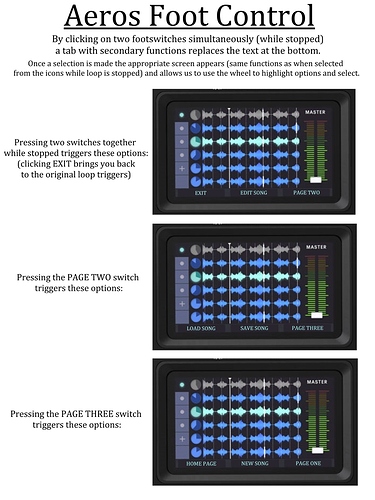 This subject is my main question as well. I have pretty much mastered 2x2 and am pretty comfortable with 6x6. I use the Aeros almost exclusively with my BB. I like what is in progress for more looping control and midi interfacing. Really, wonderful peice of gear but it’s perplexing why I need to get down on the floor to open/select/save/create a song, change storage or select basic midi setup. What of footswitch control of non looping functions? Are there plans for developing ways of navigating that nice main screen via foot switch?

It would be great to have something similar to the BB where footswitches have ‘playing’ and ‘stopped’ functions.

The Aeros would benefit greatly from some control based upon use of the scroll wheel and footswitch. This would be useful for song changes as well as a myriad of other common actions. Allow navigation and access to a variety of commands … more than the simple tap buttons would allow.

Perhaps. some footswitch combination activates some menu based control mode that takes over the scroll wheel and button until the mode is exited.

MIght be interesting to look at how the Helix uses the expression pedal to navigate the UI.

It’d be good to get someone from SS to chime in on this. I mean if they are setting things up such that the MM will be needed to really navigate Aeros, that’s about $300 over my budget for a looper. Its seems strange (to me anyway) that they are pursuing more esoteric (even if pretty neat) features rather than getting the basics down and building from there. Most of the looping features it has now works for me. I only need a unit I can navigate while staying engaged with the audience.

There’s also a space budget. The MM takes space on the pedalboard that I don’t have.

4 buttons and a scroll wheel is more than enough to access critical functions in real time and auxiliary functions with an extra step.

Amen to that. Let’s see if they ever address it.

I received the following email response from SS. Sounds like they are working on fulfilling this requirement.

So at the moment there is no option like that. We are working on a hands-free shortcut though. Hopefully we’ll have something ready in the update following the update that’s about to be released within the next few weeks or so. More updates to come soon.

That’s pretty vague. I am not really sure to which particular feature is being refered. Can we get confirmation that hands-free short cuts in general are in development?

Hi ! Here’s the full email trail including the response from SS and my original request. In my email, I had included the original text that started this post so I believe the response is for that request. Hope that makes it less vague. ChrisG

So at the moment there is no option like that. We are working on a hands-free shortcut though. Hopefully we’ll have something ready in the update following the update that’s about to be released within the next few weeks or so. More updates to come soon.

I had posted the following feature request under the Aeros Support / Feature Reqests forum, on Jan. 9.

Would you be able to provide some feedback to me on this request ?

This could be a feature request if it is currently not possible :

With a song currently selected on the Aeros looper, with the song stopped, is there a way to select move up/down one song or get into song-selection mode with a footswitch ? I’d rather not need to bend down and press the song-selection icon the the pedal screen.

Also, can Beatbuddy send a next/previous song midi message to the Aeros ?

Got it. Thanks Chris. Your op was asking about song switching. That would be a good start and hopefully part of a wider range of hands free capabilities.