Back on the beats with bass

I wish I could create beats with bass. The best beats I have are the ones with bass that I got from user generated.

You can already do this, it may not be the easiest on current BBM but we are working on a redesign that will hopefully make this process miles easier.

As @BrennanSingularSound said, you can do it with the editor in the BB Manager software or compose in a DAW and bring over into the manager.

Sorry mate but I just keep going around in circles

To add insult to injury today I tried downloading that 500 songs which has some songs with bass that I thought Id take a look at.
Now my beatbuddy manager has crapped itself. None of the downloaded files will play and now none of my preexisting songs will play as well. whats going on with that download if its corrupted shouldnt it be removed?

I think Ive fallen for this one before but got around it by creating a new project and reloading my songs back into the manager from my SD card which got it working as I said in the beginning you just go around in circles. I might have to delete beatbuddy manager and start again.

I only rarely use a DAW these days to import into the Manager. I create all my own song parts and beats with bass myself within the BB Manager. It has problems of course which you will find mentioned ad nauseum throughout this forum but once you work it out it’s actually pretty easy to work with once you know what it visually represents. It is time consuming when you are learning but it is worth it in the long run.

I am excited to see what a new redesigned version of the BB Manager with the editor that is being worked on now is going to come out. If they get it right it’ll be a game changer for those of us who like to compose our own BB songs.

How do you create bass lines with the current BB editing tool. I can only see beats?

They are done exactly the same as beats. If you’ve loaded in a Drum with Bass kit, just create a new Main Loop in your song and when you open it you’ll see the notes for the drumkit and the bass guitar listed on the left. It is just a matter of then creating your beat with the drumkit notes and the bass line by using the bass notes.

As an example, here’s the first 3 beats of a song section I have made. The first photo shows the bass notes I have entered in the editor. You can see on the left all my bass notes are listed from MIDI numbers 62 - 91 (I’m using the Rock V2 Bass 62-91 kit). 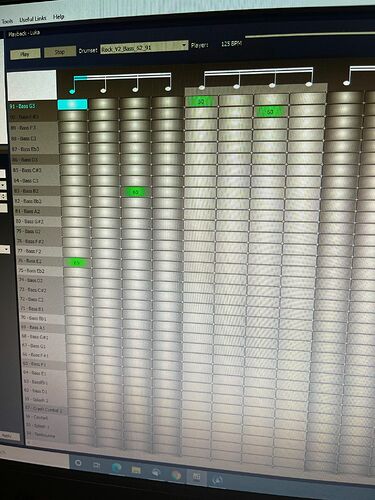 And here’s where I have scrolled down to the 2nd half of my MIDI notes of the first 3 bars. You can see on the left the drums I can use and the rest of the bass notes listed above. This shows the beat that is being played. 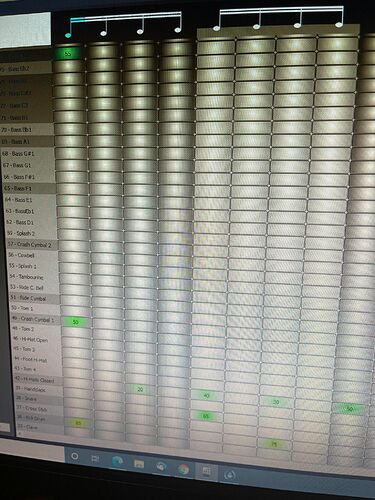 So basically, it is exactly like using the editor for the beats, but you’re putting in the notes for the bass. Have a search around the forum here. You’ll find information and tutorials. But basically once you start playing with it you’ll realise what you need to do and you’ll be away!

I didnt know thanks for the info. What velocity on the bass notes do you find is best and I noticed you have two bass notes highlighted on the first beat is that two notes an octave apart?

No, the very top left in blue is just like a cursor position. Velocity is really what you prefer. I use about 65 as the loudest for the bass notes. Kick drum about 90, snare about 70. These are my loudest hits but they vary in velocity to try and make them sound more ‘human’.

Hope this gets you headed in the right direction mate.

Hi again just wondering if you can help some more. I created a bass line for hey hey my my by Neill Young
But the bass is really booming and echoing.
I tried backing of the velocity which helped a little and transposed the notes to a higher octave but still sounds bad
Im running the beatbuddy into a roland street cube ex on the clean instrument input
I have the bass notes around 70
I’ll try backing them off a bit more

All good. Yeah you have to play with them to get the right settings depending on the gear you’re running it through.