I’m using the beatbuddy to trigger drums on my keyboards.
For the pre-programmed patterns it works fine, although for the patterns I create with sonar I have next issue.

As soon as I use a FILL/TRANS , at the end of it , it seems it triggers a kick drum twice , or the beat one out of sync. As it doesn’t happen with the preprogrammed pattern , I wonder if there are any special conditions to create custom fills ?

Have you found a solution?
I also have the same problem, and I found that it is not only the rhythm I made, about half of the original factory preset genre has this problem

I tried to remove the Kick in the second section of Fill when editing in BB Manager, it still exists

Hello. I identified this issue way back and after some research and testing I contacted SS support about the “red line” at the very end of the last bar on a beat or a fill. This is supposed to indicate that there’s hidden information past the last bar which will overlap with the following beat -like when you need to add a crash starting the next beat but not include it in the beat itself (so that it doesn’t repeat as it loops!)

The red line always appears on imported beats/fills but it also exists already on some SS content EVEN when there’s no info in the next bar (a bug). This causes missing or overlapping the very first note on the next beat -I don’t know why the miss…

So, the quickest way to solve this is to open the beat/fill on the BBManager, to edit, see if there’s a red line and, if so, ADD one bar and REMOVE it immediately. Hit Apply and try it.

I hope this helps -until the new BBManager/Editor makes its entrance… sometime… in a not too far away future.

Thank you for your help
I can’t find the position of the red line
Does it mean to enter [BeatBuddy Manager>Edit]?

That’s the right place. If it’s there it should be a very thin red line at the very end of the beat/fill. Try zooming out (green circle on my pic) and look for it where the green arrow is on my pic 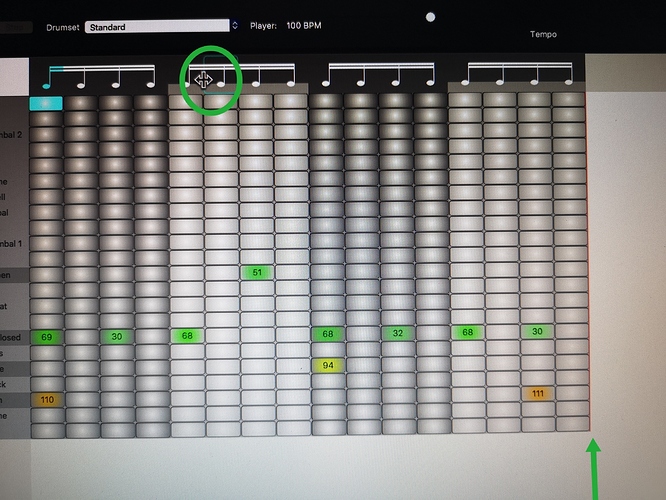 Actually, I don’t see it on your pic. Anyway, what I explained causes similar issues too!
Cheers!

I understand what you said about Red line, but I did edit it in Nuendo before inserting midi

I don’t know how the BBManager/Editor did not insert that red line when you imported the mid file from Nuendo. I’ve used several DAWs -not Nuendo, though- to edit midi files and this happens every time, no exception.
Actually, even the SS midi files with no red line that you export will have a red line when imported. May be it’s just a problem on the Mac version of the BBM.
Cheers!