@BeatBuddy_Support Gain on thru output - how can I reduce this?

Hello, recently purchased the BB because people raved at how well it worked quantizing w the Boomerang III. I play brass instruments through my BIII and thought it would be nice to throw in some percussion for Polkas/Marches/Waltzes.

My setup from a horn is a Audio Technica Pro 35 (?) w/ Phantom Power which then runs into BIII.
Output from BIII into BB left input channel. From there (right now) am running it through a small Crate amp.

Prior to adding the BB (a direct line out of BIII to Crate), I got a decent tone that was reasonably clean. When I add the BB, somewhere bw the input and output of the BB - there is gain being added. The brass tones now sound not so good as they are hotter with some extra thrown in that I didn’t hear coming straight out of the BIII.

I experimented with the 2 volume knobs on the BB but to no success.
I did find that on the BIII I can mute instrument output (it will only output looped output) and then of course I won’t get the hotter signal bc none is coming out. It could work but for larger settings I like the amplification.

Is my unit defective? Is there a firmware update or some setting I can change? I thought this would be a clean thru output (?) but it is changing it.
Please advise.
Thanks
Jim

I have had a couple of BBs (I wear them out) and have not seen this behaviour at all. Can I suggest you reinstall the firmware? Might be a software glitch.

And welcome to the family!

Not to suggest the obvious- but have tried some different cables? If what you were are referring to is a bit of “grit“ on your tone, a bad cable can definitely give you that. I’m not familiar with the boomerang, but if for some reason it is putting out instrument level output, that would definitely be less hot then the line level out from the beat buddy, as well. Just a couple thoughts.

A quick and dirty check of a sine wave in and out of the BB kind of shows a small amount of gain.
The specification for the BB’s input, “Max Input Level: 3.5 dBu”.
First test was with 1.5 vpp into the input (upper waveform) and that showed a small amount of gain on the output (lower waveform), but clean. I then input about 3.0 vpp into the BB which equates to about 3.0 dBu and got signal clipping on the output . I didn’t load the output and that may make a small difference, although an amp wouldn’t load it much either.
The Boomerang appears to be capable of pushing a good deal of signal.
Wondering if you can back down the output of the BIII going to the BB and make up the gain at the Crate amp. Just thinking you may be going into the BB a bit hot and it’s not liking it and giving some distortion.
BIII specs… “Playback Volume Range -22.4dB to +9.6dB (“7” on the dial is 0dB or unity gain)” 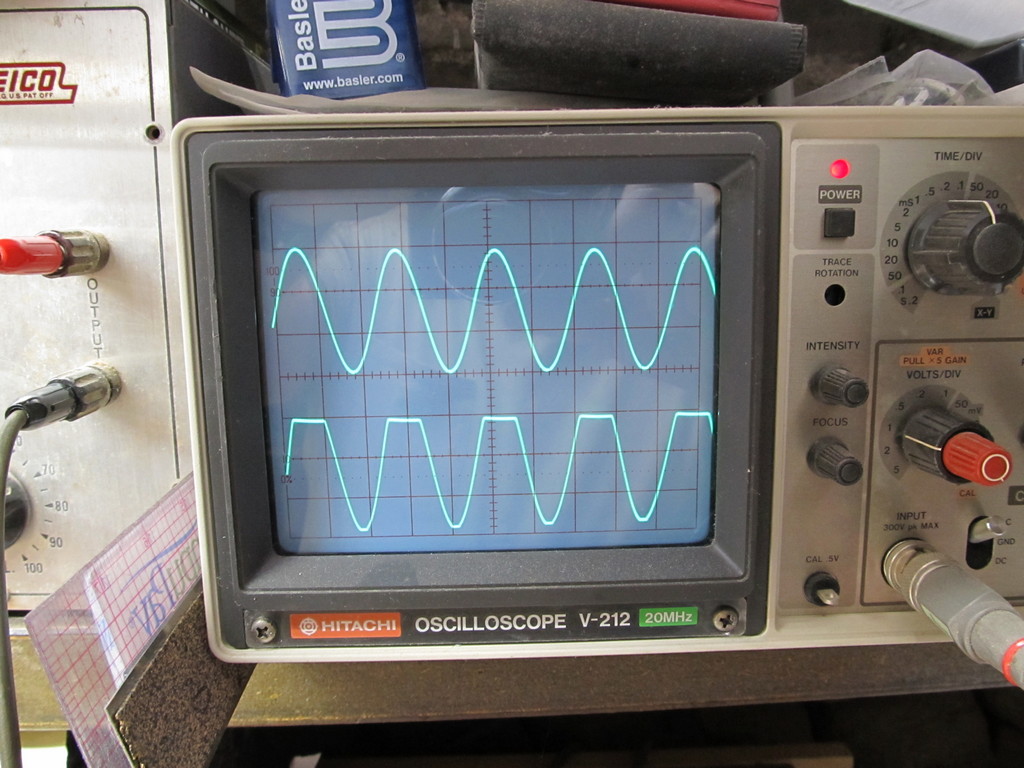 Hi Joe, I topgraded the firmware … still the same. Seems to run a little hot most noticable when I get in the upper range of the instrument.

Hi MarkF48
Thanks for taking the time to provide some tests and data.

If I record a loop and play it back I don’t get this upper range distortion / bit of clipping. But when I play it straight thru the first time (while recording or not) that is when this effect occurs.

While there are volume controls for the output volume of each loop (there are up to 4) … I cannot find a way to control that output. I’ll keep looking but sounds like it is just the way it is … its the thru output that is killing it. I can stop it to the amp but that means no other effects on the sound as its played.

Therefore I can control the loops but not the original.

and I’m wondering if this is a complete hardware thing or if there are any settings in the BB in which I could reduce this clipping? Guessing its a pure hardware thing tho …