I’m seeing some very odd behavior still with how BBManager is interacting with my SD card on my MacBook Pro.

The 4GB card had a .bbp file on it that still worked in the pedal. I was able to manually move all the folders to the SD card from my workspace and get it functional. So it has all my current songs.

So I can’t explain why the 16GB card works and the 32GB card doesn’t.

So I suppose that’s progress, as I have 1 card that seems to work with the BBManager Export. And another card (16GB) that I can manually copy the SONGS and DRUMSETS folder, but can’t Export using BBM. And another (32GB) that won’t work at all, even with the same content, and even though it was working fine before Sunday.

I’m a bit at a loss as to what I can do next. Sorry this was so long, but I wanted to detail everything I’ve done to date to try to resolve this. Please advise!

Try to isolate where exactly the problem is taking place. Here are the areas to troubleshoot and in the order of most- to least-likely to be the issue:

If none of the troubleshooting steps above have worked for you, you can always contact Support, support@singularsound.com as I’ve been in touch with him to discuss your problem and he thought that it could be that your Mac sees the SD card as Read Only.
@BeatBuddy_Support

I actually have been using an external, as my MBP only has Thunderbolt ports. So I have a SD->Thunderbolt. I am in the process of setting up my old Mac to see if I can get BBM working on there.

I suppose it could be seeing the card as Read Only, but then I wouldn’t expect that I could manually transfer files either.

Tonight I was able to get BBManager up and running on a second Mac I have. It has a built-in SD port. I was able to get it working as normal with both the 4 and 16 GB cards. However, neither 32 GB card wants to work. It gives the same error on both cards and does seem to act like the card is read only.

I’d still like to understand why the 32GB cards stopped working. I have an ongoing email with Support. But I think I’m largely back up and running as far as creating/uploading new songs to my SD cards (for now).

I suppose it could be seeing the card as Read Only, but then I wouldn’t expect that I could manually transfer files either. 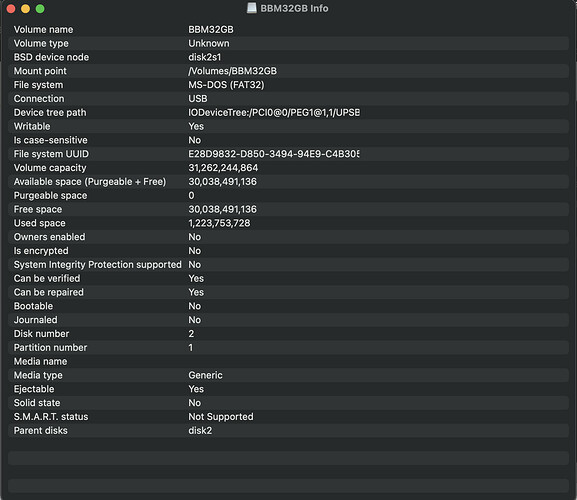 Getting ready to PM you.