Is there a manual for creating drum kits in the BB Manager for Mac users?

I have followed the very sparse instructions from various sources. However, it seems that this has to be done very specifically. One wrong move and everything goes haywire.

When I am creating kits it appears to work only once before the WAV files are becoming corrupt. When I look at the location of the WAV files it looks like BB Manager has added folders within other folders that have not cohesive order.

If someone could provide a step by step guide this would be very helpful.

Here is a screen shot where I have gone through the steps with one sample. I create the kit (On my desktop) and save it (on my desktop). Then I import it into BB Manager.

It works for the first time. Then after saving it starts creating folders inside folders to the point where the sample cannot be reached. The WAV sample also becomes corrupt and will not play. 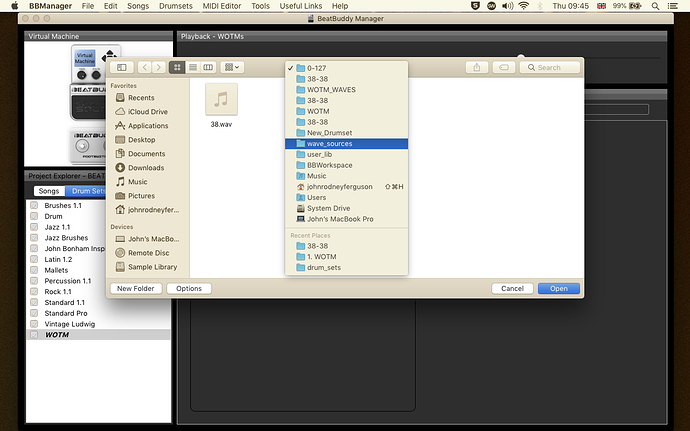 That will explain how to edit a kit. In many instances, it’s easier to start with an existing kit, and then edit it to your liking.

But, your real issue is not with kit building, but with sample creation. I have been down this road, and had the same problems that you are having. When I created wav files in a Mac program, usually Logic or Garageband, the resulting wav file would work when I first entered it in the kit, but, after saving the kit, or changing kits, the wav would appear in red letters, and, it appeared that the link from the name to the wav was broken. I tossed this problem out to the forum, and Persist and Phil (not me, the other one) came to the rescue.

After working through the problem, Phil believed that the issue was with the wav type. That, although the Mac said I had a 16bit 44.1khz wav, the wav was not acting as such. He ran a few of the offending wav files through a program called Switch, from NCH software, essentially converting the files from whatever they said they were to 16bit 44.1khz wav files. Then, the files worked. In doing this, we came to the realization that the wav files probably were formatted correctly, but the Mac is adding hidden tags to the files that corrupt them for use in the BB.

So, really, that is the issue. You are going to need to strip the tags. Some folks have had success with a program called Tag Stripper. I recommended you get Switch, if you intend to build kits. It will bulk convert from various formats to the required 16bit 44.1khz. Its also great for converting 48khz samples that you might find on the web.

The PDF manual and Switch software look interesting. I will go over my samples and kit building again with your suggestions : )