Is there a quick way to convert regular Beat Buddy songs into One Press songs?

Can it be done? Yes, if you have a DAW. Can it be done easily? Probably not.
Although the audio quality of the default drums is very good, the process of stitching together all of the song sections would take some effort to do it properly.

I’m curious as to to why you would want to do so.

It might be easier to transcribe the drums from scratch for the song you want from the MIDI source file.

Persist,
I find it quite difficult to control transitions while also controlling my guitar rig and harmonizer. Seems everything always has to be done at the same time. Too many button presses!

So, I had already created a few songs when I got my Beat Buddy last week, but was hoping I could convert them.

I’m getting frustrated that every ‘solution’ involves using a third party DAW ( which I do have). At first I thought I could just add midi control to the song sections…but can’t do that really easily either.

I love the Beat Buddy. Sounds great and is really cool, but some songs just need to go from start to finish. Yes, others I want the flexibility of choosing when to have a fill and to transition.

I’m thinking I may have to just create some songs in Logic and use them from my iPad.

This just isn’t as simple as I’d expected.

Thanks for your reply. I truely appreciate it!

Why not just use a loop pedal to record and save your beats? Boss RC3 loop pedal has 99 open presets that you can save to and call up at anytime.
Ron

Maximum saved time on the RC3 is 3 hours. That would be less than 2 minutes per song using the 99 slots. The BB has no real limitation of song length. 99 folders x 99 songs.

@Gmptoons - Persist’s suggestion or transcribing the drums from midi is quite effective. We have, I believe, 2000 or so songs in Resources. We’re pretty good about responding to requests to make one press songs, if we can find a midi source, or if we want to work one up from scratch. But yeah, stringing together the Beat Buddy songs (I guess you mean the Premium Library songs) into a full tune, can be a difficult process. If you are talking about your own original material, I find it relatively easy to do using a third party DAW, adn yes, that is the only realistic way of doing it.

Hi Phil, I’m new to BB hence the 4 year gap between your post and my problem lol.
I had hoped I could load a full midi drum track into the BB and have one press and away you go. Not so!!! Probably something I’m doing wrong but - - I’ve followed some instructions from the support team in that I create and load the intro into the main loop then the full drum track into the outro. That seems not to work for me and the intro just repeats. Any help will be so helpful.

The pdf above should give you some guidance. If you are doing just drums, you can ignore all the parts about the bass. Pay attention to step 7, or you may not hear a kick drum. Also, if the track you are using is heavy on toms, check to make sure that the BB kit you are using has instruments in all the tom locations. To view a BB drum kit, find its name in the the list of drum kits in BB manager and double click on it. A drumkit editor window will appear. I am also attaching a second pdf on editing drumkits.

Reference in there to LBDM refer to a product I made which ports the Alesis SR-16 to BB. If you are interested you can find more details here: 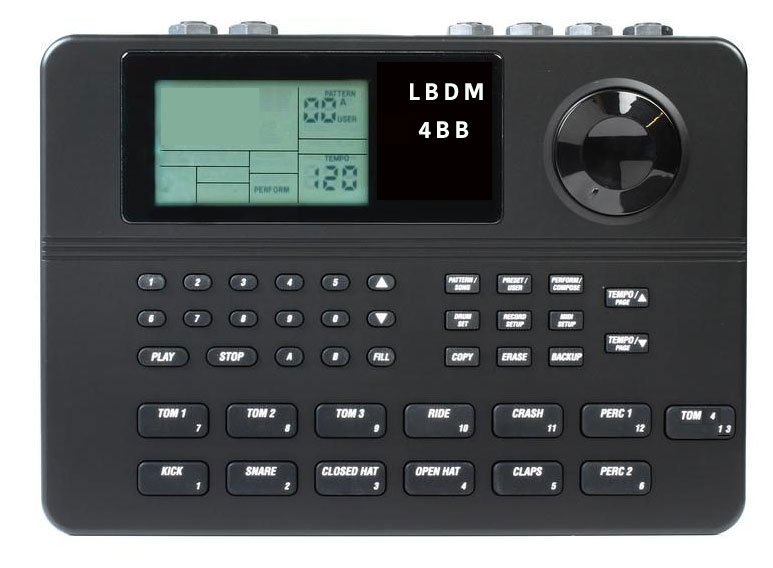 Looking over you question, you almost had it right. Support steered you in the wrong direction. When working with the BB and within BB Manager, a song has three main sections, the intro, the main loop(s), and the outro. Understanding how these work can help your process. I ignore the names intro, main loop and outro. I look at it this way Intro = everything I want to hear before the part that is going to loop. This part will play one time, and then move onto the “main loop.” The “main loop” is the part of the song that I want to play over and over, until I tell it to move on. I can move on to another part that plays over and over, i.e. main loop 2 or subsequent main loops, or I can move on to end the song. Outro = that part of the song that will play after any looping parts. It plays once and then ends.

In constructing one press songs, I have nothing that will loop over and over. Therefore, I put the entire song body into the “intro” section. In the main loop and outro, I place null files. There are file that typically contain a single note of velocity 1, hopefully at a location that has no sounds assigned to it. When I press play, my entire song plays, as its all in the intro. When it reaches the end, it goes to the main loop, which has no sound and plays over and over. I double tap to end the song. The song goes to the outro, which also has a null and plays once and ends.

Some users prefer to put the entire song into the “outro” section. It’s a matter of personal preference. To play that type of song, when you press once, you are looping in a null main loop. To hear the song, you double tap and the song body, which is contained in the outro, plays once and then ends. The BB is then immediately ready for the next song. The disadvantage of using the outro as song body is that the song will play without regard to beat 1 matching beat 1 of the visual metronome.

The disadvantage to having the song in the intro, is that you need to double tap to end a silent loop.

Some users prefer to have a separate intro, and the song body in the main loop. If you use that system, it is best to leave several measures of dead space at the end of your midi file to give you time to double tap the pedal to end. Also, be sure to place a note in the last measure of your midi file, after the dead space, and have that note extend to precisely the end of the measure. Failure to do this will also cause problems with the visual metronome.

Place a null file in the outro, with this method.

Hi, A very helpful post from you which has given me hope with one of my problems i.e. getting midi files to play right through. Why the SS support responder didn’t give me a more helpful and accurate answer I’ll never know.
The issues with BB Manager remains a real pain as using a programme that seems to have been released before it was tested and remains unfit for the purpose it was created.
I now have to create my own drumkit that more accurately places the right drums in the right place and more accurately mirrors the locations in most midi files created in SONAR, CUBASE and several others. If you know of such a kit (Rock sounds) I can download, that will get me up and running much earlier than if I have to create one.
Many thanks for your invaluable help.
Peter

It’s more a matter of adjusting the locations of certain drum instruments within your MIDI song file using your DAW so that it fits the existing default content kits or the user-created drum sets (of which there are many). Phil_Flood has created dozens and dozens of very good drum sets and they are super flexible. Among them are the kits for the sub pro and sub pro with bass kits. Rock and Rock_V2_Bass_2_31 kits will give you a little edgier sound as will Phil_Flood’s Rock & Rick Bass 0-31.