As I did not have a lot of my own material on the BB I decided to go the easy route to content replacement. I do however have a couple song folders and drumsets I’d like to install. I would assume these would be placed in a user_lib folder. I am wondering if I should create this on my own or will the Beatbuddy Manager handle this when I import material?

Not a good idea to use your computer OS to place BBM content within the bbworkspace folder. Unless the BBM is used to manage its content, it will not know that the OS was used to place song folders and drum sets in the user_lib folder.

Use the BBM File > Export > Folder and after all is said and done, you use the BBM to import the folders and drum sets.

I tried cleaning out the directory on my mac. Then opened directly from the SD card with the updated content. It asks me to save a project to the Computer. I do so and as it is copying the content files it claims a directory is present that has not yet been created. 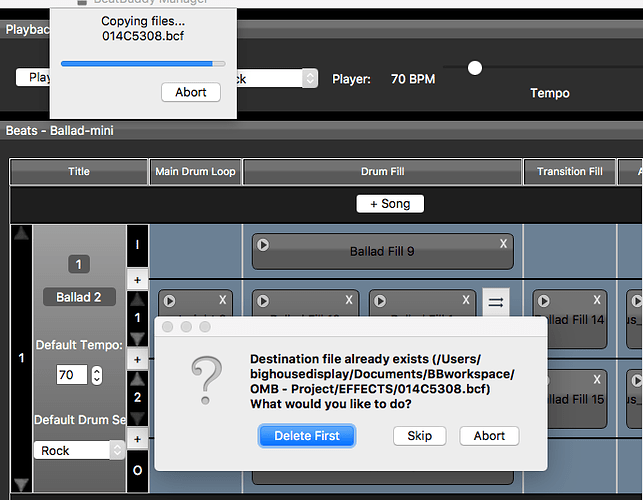 Hmmm. Have not seen that message before. You can try Delete First or Skip.

I see that you have the folders and drum sets in your bbworkspace folder. Did you import those to the new project yet?

The folders and drum sets were not actually in the BBworkspace. I did import them. One of the drumsets I built myself. It works in Studio One but the .wav files do not work in BB manager. Also even though I have a couple folders of midi files I created myself they do not appear in my BBworkspace on the Mac. I exported to the SD card. There was a default library and a user library created but neither of them contain anything but empty folders. The difference in file hierarchies continues to baffle me.