Is it possible to add fills that are of a different length than the main loop?
I have a couple of songs that use a slightly extended line in some verses. If I transition in the right place, the next loop comes up out of synch - well, still in time but with the bass & snare beats swapped if you see what I mean. The songs are in 6/8

Is it possible to add fills that are of a different length than the main loop?
I have a couple of songs that use a slightly extended line in some verses. If I transition in the right place, the next loop comes up out of synch - well, still in time but with the bass & snare beats swapped if you see what I mean. The songs are in 6/8

I’ve had a few songs where this has been the case for me too. Usually a half bar out of sync. What I’ve done is to add a half bar of the main loop as a fill in. Press it anytime during the main loop and it will get you back on track.

That was my first thought but the midi editor only gives whole bars so I can’t get 1/2 bar added.
I tried BeatBuilder to do this but it just resulted in 1/2 bar silence at the end.
Can you describe, step-by-step how you managed this?

I’m curious too, I’ve never been able to get this to work. Maybe a firmware update added this feature. Can you provide more details or provide the files you used to make this work?

I’ve had a few songs where this has been the case for me too. Usually a half bar out of sync. What I’ve done is to add a half bar of the main loop as a fill in. Press it anytime during the main loop and it will get you back on track.

Can you explain how you did this 'cos I can’t figure out how to set 1/2 bar?

Looks simple. Can’t get it

Here’s what I did. What did I do wrong?

I exported my 4 bar 6/8 loop to midi
I imported it into a Fill section
I changed the time signature to 3/8 (otherwise no editing)
When I tried it, it still left me 1/2 bar out
Then I tried editing it down to 2 bars but still no luck.

I’m completely stalled atm as it seems I do a lot of “1/2 bar shuffles” in my songs so this is extremely frustrating.
What am I doing wrong?

Hm. A four bar fill doesn’t make sense. Fills should only be one bar. I guess I’m not sure what you’re trying to do. Can you give a specific example? What song? You mentioned a half bar, not a half PATTERN. The pattern you mention consists of four bars. Half of a four bar 6/8 pattern is a two bar 6/8 pattern.

I’m not explaining this very well

Does this make more sense?
The song works fine except for the 3rd line which is longer than the others.
Watching the visual metronome, it counts 1,2,3,4,5,6 with the kick leading on 1, snare on 3 (4 times for each normal line) but for the 3rd line it adds another 1,2,3 so I come into the 4th line 1/2 way through with the snare leading, throwing the song off balance.
To make matters worse, after the instrumental, the added bit is twice as long.
I can’t shake the feeling that I’m missing something really basic here but I don’t know what.
The song is Wind That Shook the Barley by Solas & I’ve been playing it with bands for years.

Thanks for your patience,

Wind that Shook the Barley as a reel is in 4/4 (obviously). Wind that Shook the Barley in 6/8 is really a ballad not a jig and every performance of it I could find was sung VERY slowly and VERY freely, ballad style not jig style without any percussion accompaniment. This allows the singer to be very free with note lengths and pauses between the phrases. There is definitely a way to sing it as a straight 6/8 balled with no long or short measures. The trick with this song is that each phrase is begun with a pick-up not which is the last beat of the previous measure. This is a little tricky to set up because you need to treat the very first beat, “I”, as if it’s the very last beat of a four bar phrase that doesn’t exist. This is how you should set it up so that you don’t end up with a weird five bar intro.

Look at the music below. The first “I” is in a measure with just one eighth-note beat. That’s why you have to create that intro fill. After that you go into a straight four measure 6/8 pattern with “sat within the valley green. I sat me with my true love.” The first note of the next phrase, “My”, actually starts on the last beat of the current four bar pattern. That’s what is throwing you off. It’s actually a basic four bar pattern repeated four times, but you have to account for the fact that the very first note needs the END of a bar to come in on. From there on out you’re into the pattern and you’re good.

Still, with a slow “mournful” ballad, you should consider doing it accapella with no percussion. Then you can take as long as you want with your embellishments and between phrases. 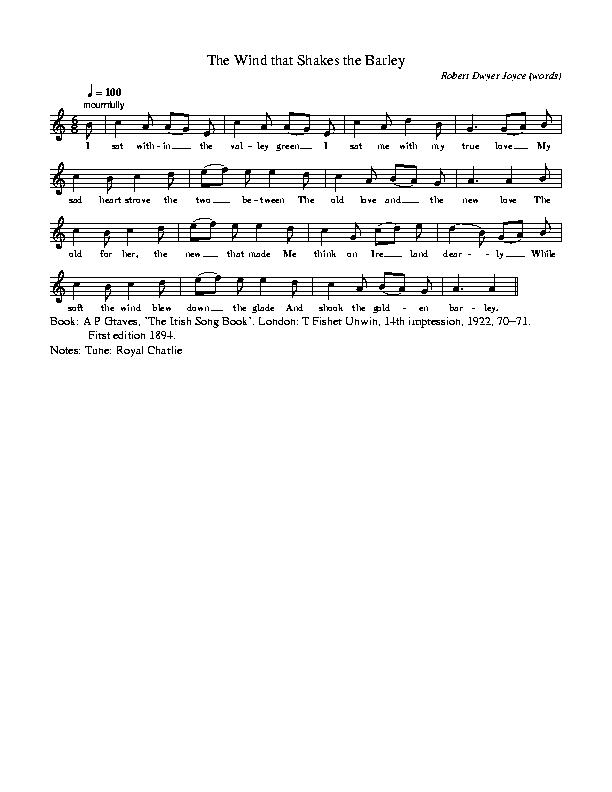 Thanks. I appreciate your help.

Solas’ (& my) version is definitely in 6/8 & not a slow ballad, with flamenco style clapping in the instrumentals.
I’m using OddTime – beats 33 & 37 – 6/8
The additions to the 3rd line are exact & regular & I don’t think it’s possible to sing & play it in straight 6/8 without reversing the kick/snare.
I used to use an Alesis & that could be programmed exactly for the song

I should say that I am using World Percussion for most of my songs so far with cajon bass & snare as that fits in with the acoustic feel I am going for & I am playing the tune as well as the guitar backing simultaneously as well as singing it.
I play Richard Thompson’s “Down Where The Drunkards Roll” without percussion for the freedom of expression you describe but my WTSTBarley definitely benefits from some backing.
I also used to do a fast, punk-style version of the Fields of Athenry, but that’s another story

I’ll have a go as you describe it.

That is a FANTASTIC version of The Wind that Shakes the Barley!!! I looked it up. I’m analysing it now.

You’re right. They throw in an extra “half-bar”. It’s a 3/8 bar really. Very interesting. Not typical for a jig, but very cool. I’m working out the best way to do this right now.

Eight measures of 6/8 as an Intro Fill. Come in singing “I” on the very last beat of the 8 measure 6/8 pattern.

BB will automatically go into the first 6/8 mail loop.

I sat within a valley green,
I sat there with my true love,
My sad heart strove the two between,
The old love and the new love, - Exactly eight 6/8 measures.

While soft the wind blew down the glade
And shook the golden barley. - Four 6/8 measures and we’re back into the standard jig.

There are some very interesting instrumentals and some breaks. This is just a first pass, but if you’re willing to give up some variety in the underlying rhythms there might be an easy way to deal with this that doesn’t require you to operate the pedal too much and doesn’t require you to be too precise with when you press it.

The Intro Fill should be an eight measure 6/8 pattern. No surprise there. You come in singing on the very last beat of the intro fill.

Here comes the trick. Let the same four measure 6/8 Mail Loop pattern loop for the next two lines ending on “golden barley”, but create a 9/8 (6/8 + 3/8) Transition Fill. Start the 9/8 transition fill on the last measure of the Main Loop. If you only have one main loop, you’ll get the long measure ( 9/8 ) transition and it will “transition” back into the Main Loop. That gives you your extra “half measure” just when you trigger the transition.

You can still do something like an exact one measure break or fill for the instrumental parts and it will stay in time. If you want it to be consistent, then you should only have one fill.

You could create a much more complex song structure with more parts with more Main Loops, but you would need to be careful about triggering the long measure transition because it will actually transition you to the next section.

Wow! Thanks for your help. I’d already clocked starting each line just before the beat & the fills for the instrumental interjections but hadn’t ever thought of the 9/8 fix.

Yeah, this song is one of my favourites & a bugger to get the fiddle bits & chords playing simultaneously but I enjoy it immensely.
I’ll try it this week & let you know how I got on.

Maybe a long pattern with 9/8 fill? I just need to test to see where BB resumes from a fill in a different time signature. This might still be easy.

That’s what I thought. Maybe the ability to have a different time signature for fills and transitions can be added in a future firmware update.

You know what would be cool is if you could press the pedal one to start a loop and press again to end the loop and have it keep going so you could do a solo as long as you want till you press the pedal again. hey i can dream right!

That’s what I thought. Maybe the ability to have a different time signature for fills and transitions can be added in a future firmware update.