I am a keyboardist but bought BB a couple years ago because I wanted a drum machine that I could hack and tweak to meet my specific needs. I have been creating a Windows touchscreen app that allows me to control BB easier than using the pedal. I’m having a problem though, because of the way BB is reacting to the control info I send to it such as:

Hopefully, these items can be addressed easily and included in an update. I’m very open to working with the devs on testing and resolving any work on this. I plan to release the app that I’m producing to the community once I get it stabilized and address the issues. It really seems to be promising as a midi controller for those not able to optimally use the pedal. 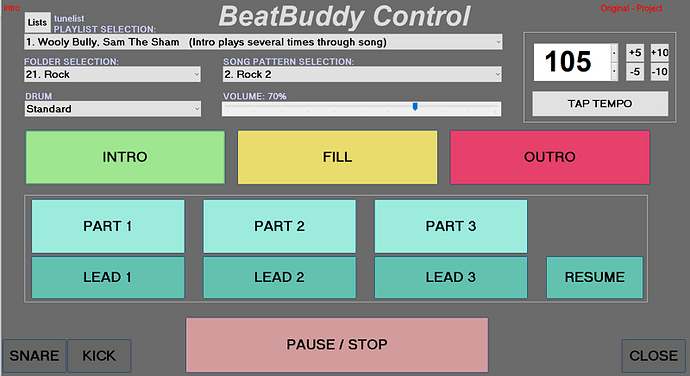 Ed Saxman wrote an app that might be of interest to you. I bought it last year and it works as advertised.
Here’s the thread where I learned about it.
BeatBuddy Wireless MIDI Controller - Premium MIDI Layout for MIDI Designer Pro (IOS) - BeatBuddy / General - Singular Sound Forum

CC:111 does not unpause after I have paused. The pedal shows no response.

Are you sure that you are sending the alternating values? Value 1 pauses, and value 0 unpauses

You can find all MIDI commands the BB responds to here.

There is no way to trigger a part via CC:113 without a transition! Many times I’d like to start a song right in the part or change parts without a transition, but there’s no way to do it. Would it be possible to include a new control number that could handle this? Or even just allow for values like 101, 102, 103, etc to play parts 1,2,3 without the transition? This is a BIG issue for me!

We are currently looking into this, stay tuned!

These were reported already by support and will be looked at soon, thanks for the requests, I cannot currently comment on whether or not we will/can support these.

Let me know if you need any more help!

So glad to hear that there could be something done about the other midi codes! I’ve been able to develop my app to control BB but these enhancements would be perfect.

Thanks for reporting, this needs to be edited

This is the correct midi mapping here