The young girls (10 and 11) need to do an audition and I asked them to play this song, as it is our warm up song when we play surf music. They keep asking me if this is surf. I am not quite sure what to say too but all I tell them is, Nokie and McGee played this song not with a whole lot of splashy drip sound, and we love the Ventures, and I could be wrong, but the Ventures, Nokie and McGee, to us, the 3 or any of the 3 = surf. Would you consider what we surf rock? Please tell me so I tell the girls and give them a good answer.

The kids sure have put in lots of effort in playing the song, yet I guess you can tell we have fun playing this song each time. And I tell ya, everytime we play this song and use our Beatbuddy, we put on a smile on our faces and we are so bad and never think of our drummer no more! hee hee . Cheers!

The girls’ playing skills keep improving with every video.

I grew up with the Ventures and I never considered their music as surf. This write-up seems to support that https://en.wikipedia.org/wiki/The_Ventures I’ve always thought of them as rock. Their music and style of playing certainly influenced surf music though.

@Joe_Ellis, what do you think? Joe has posted several of his original compositions and might be considered a surf genre expert.

LOL, I’m no surf expert, but I know what I like. This is most impressive! I suppose you can do a surf-spin on just about any song. Technically, this is a very old folk song of uncertain authorship. 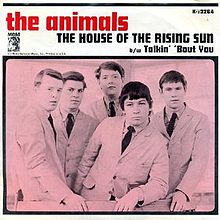 The House of the Rising Sun

"The House of the Rising Sun" is a traditional folk song, sometimes called "Rising Sun Blues". It tells of a person's life gone wrong in the city of New Orleans; many versions also urge a sibling or parents and children to avoid the same fate. The most successful commercial version, recorded in 1964 by British rock group The Animals, was a number one hit on the UK Singles Chart and also in the United States and France. As a traditional folk song recorded by an electric rock band, it has been Li...

When I was in my late teens, I remember my dad watching a bluegrass show on TV and one of the groups performed that song. I was amused that these old fogies would be doing a cover of the Animals’ song. But my dad said, “That song has been around a lot longer than the rock group that made it so popular.” So my answer is, it is surf the way the Cotton Kids are playing it.

Thank you, Joe! Will tell the girls and give them some background info.

Once we were jamming on stage with my 83 year old teacher, who is the top jazz player (sax) in town. I told him jazz is too difficult for us, and he asked what we wanted him to do. I said let’s play the House of the rising sun. He said, “you know the lyrics of the song, right?” hahaha…I said we’d do an instrumental version together…

Well, coming from and living in a casino city, nothing can be too shocking, even for kids…hahaha!!! am glad you like the way we play it. cheers!!!

To us over here, I always thought surf music means a lot of reverb, a lot of the splashy dripping, wet sound, then playing with a certain types of guitar like a jaguar/JM, mosrite or a strat, or some sort of an offset guitar from the 50s and 60s, then using the whammy bar a lot, and instrumental stuff…I had not heard very many people playing it after the 70s here…and back then, i didn’t know what it was even called, not until in recent years, cos all I knew was, surf music was associated to black and white movies from HK in the 60s…

That’s what I told the girls. But i guess it i can be a lot more to that. Thank you for giving us some ideas!!!

P.S.: you won’t believe this. Over here on this side of the world, whenever we play surf, many younger people (born after the 80s and 90s) thought it was something brand new and they have no idea where this kind of music comes from. It’s really interesting to see this… hahaha

That is very much a 60’s British Blues vibe, going on, until you get to the bass solo, which is your own thing. Nothing wrong with it, it just doesn’t fit a typical blues/rock genre. I could see what you did as being a Shadows jam. I wouldn’t exactly call it Surf, as the song, is more of a Country Blues, that has become a rock standard. Anyhow, I have nothing bad to say about it; it was a very enjoyable listen as 11PM, before I head off to bed. The girls did a great job!