How to create an .sng?

Once you’ve created your song, select it and export the song from File > Export > Song 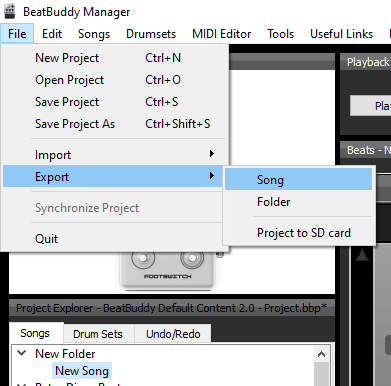 You will then be able to save the file with *.sng.

You can create your midi files in most Midi editors or DAWs and import them using the ... button in the parts of the song

You do have to be careful when creating the Midi files that the instruments match the correct one in the BB drumkit.

Thank you for the screenshots and information they are most educating for sure I understand A bit more now, I had to start a new project then I was able to add the midi file to the main drum loop button just now. And it plays YAYY… now if I can figure out how to add one to the intro fill, drum fill, Outro fuel, transition fill I would really be getting somewhere I want to be, the only type DAW I have and if it’s that is GUITAR PRO 5 which export midi and or wave … SO I guess I’m in ???

A midi file can be added to BBM. If the midi is just the drum part, it will normally play correctly. If you want to create BBM files that have bass and keyboard sounds, you need to manipulate the files to fit the drum kits,

I am assuming that what you want to do is to take some exsiting midi file that you found on the internet and make a Beat Buddy file out of it. If so, the tutorial that follows tells you how to do that, although it is written for Logic Pro X, a Mac-only program. You will need to use some sort of DAW, like Cubase, ProTool, Audacity, Reaper, etc., to do this. The principles ill be the same, although the command names and actions will vary from program to program. There were other tutorials on the …

I believe it’s the Beatbuddy manual pdf that says that GUITAR PRO software will do this for us, I have files I created and some are downloaded from the Internet. I’m customizing these because they’re already written so I don’t have to create the drum lines from birth… here’s a new problem, I created a new project. I inserted a midi file in the main loop tab BBM… it plays once no problem when it’s over it stops. Then I cannot get it to play again, unless I delete it and re-insert it then it will play only one time, I can’t get it to highlight the rectangular PLAY Button itself it only plays once from the tiny diamond circled play button on the main loop tab

You probably have a bunch of empty space at the end of the file.

How can I visually look at that to see if I have lots of dead space at the end? I don’t think It does but I suppose it’s possible, it makes sense of what you’re saying. When I created it, in Guitar Pro there was no dead space at the end, I exported it as a midi and I listen to it with Windows media player and it ends at the ending correctly. I added it to the BBM and it will only play from the tiny circle with the arrow head, it does not highlight the Main play and main stop buttons at the top of BBM, that’s my present problem

You’d have to open up the midi file in a DAW and see how long it is. Send me the .sng, and I can take a look.

Your file is acting normally. It does not have dead space at the end. When the press the play icon on the part in BBM, a file one plays through one time. To get a file to loop around, you need to press the peadl part of the virtual pedal, as if you were using the hardware pedal.

Pressing the > icon in this plays once and stops.

Pressing the pedal portion of this gets the loop playing continuously.

You also want to make sure that the notes in your track play notes that are in the kit. I noticed you had a kick drum at midi 35. Not all BB kits have this. 36 is the safer bet.

Thank you I appreciate your help Phil

New problem now, I made my midi file, loaded it into the “main loop“ of the BBM. It visually plays but the sound is gone “No sound anymore“. There is nothing wrong with my midi file. Nothing wrong with my PC audio output. This is so frustrating. Going to use wife’s laptop, “2nd workstation“ and check it on hers. It’s very discouraging… because it played with sound minutes ago … well I just spent 10 minutes deleting the old project and re-creating one with new folders and new midi tracks, opened the midi editor and I see was not supported, changed it to supported and it’s all rock ‘n’ roll now … WATCH OUT i’m on fire Lol… I appreciate all the help