Looper for Dummy for Beat Buddy

I know this may have been done to death, burt technology marches on, so, time to resurrect a zombie…

I find myself wanting (actually, NOT wanting, but considering) adding an outboard looper. I want to drive it entirely from my Beat Buddy so I can hide it at the board. I need it to record a loop, Start, Pause, Stop, Erase. That’s it. Single loop, not series or layered loops. And, while I’d love to justify an Aeros, it’s way overkill for me (and my wallet) for what I want to do.

It has to operate as a slave to the BB, because I want to be able to plug it in and forget it’s there at gigs.

Has anyone used a Boss RC10-R? What else might work for me? Again, MIDI-controlled. Record, Start, Pause, Stop, Erase.

I have the Boss RC-500, which will slave to the tempo of the Beatbuddy through MIDI. It is not but ten or so dollars more than the RC-10R , which has more built in rhythms , but isn’t as capable as the RC-500 when it comes to looping. Something simpler would be the RC-5 which is a single track looper with MIDI sync capabilities. The RC-1 doesn’t offer MIDI. The RC-600 is more on par with the Aeros, both features and price-wise. 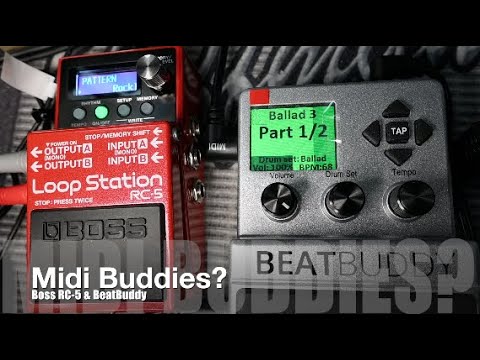 That could work. Here’s what I have in mind…

I have a couple of songs that need a second guitar playing the rhythm, and I already use the BB to trigger my lights via MIDI, so I could dedicate a MIDI instrument channel to control the RC-5 (Record, Play, Pause, Clear), but the BB audio would never go through the looper, just the guitar.

I’ll have to look for the RC-5 MIDI implementation manual to see if I can get it to do what I want it to do.

Thanks for the suggestion!

So the next question is, assuming the RC-5 (or whatever) responds to MIDI START/STOP, can I embed those commands in the MIDI file being played by BB, or do I have to rely on BB’s soft-wired commands? I might need another MIDI event procsesor…

can I embed those commands in the MIDI file being played by BB,

Afraid not. You have to rely on the BeatBuddy (BB) pedal settings.

Okay, thanks @persist. I’m going to rent an RC-5 and see if I need an Event Processor. Might be able to get away without out it, but I really doubt it.

The RC-5 will allow you to pre-record up to 99 parts to be played back in synq with the BeatBuddy or its internal drums.
Santa is bringing me a Morningstar MC8. Similar to the Midi Maestro. It will control the looper and Beatbuddy at the same time. 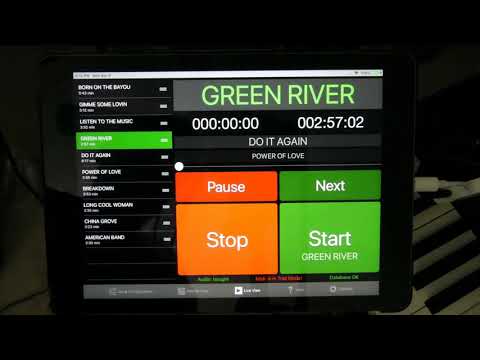 I have the Aeros, the easiest looper I’ve ever used (though it isn’t cheap), but I’ve started adding pre-recorded loops to my BB drumsets rather than play the loop on the Aeros. I can then play around with the loop at my own pace and do some fancy things that my ancient body and mind can’t achieve with the looper alone.

I’m considering doing the same, but I hate to add yet another drum set on a per-song basis. If the drum set files were allowed to be bigger, I could load several recordings for songs into a single kit, but that doesn’t seem to be coming anytime soon.

Yeah. Invariably you have to reduce the number of different “volumes” per instrument to give yourself more room to add what you want. I have several variations of the basic sets for different songs. I don’t use one press.

I use Loopy Pro on my ipad (seems to run okay on fairly old iPads) and I use Midi Designer Pro to receive the BB section messages and send a completely different message to Loopy to make it play the previous/next section in Loopy. I’ve got (blueboard) MIDI pedals driving BB next and previos section as well as the BB expansion footswitch. When I press these buttons I get teh transition roll then Loopy plays that prev/next section.

Early days for me with this setup, but the theory is I can duo with this setup for a bit of fun. Sometimes I just use BB with a drum roll, transition roll and a single song section. Between that and pausing I can get away with doing a lot, particularly with two guitarists. I may end up only using single section songs… danger of loops not transitioning properly, etc?

This set up is not gig-tested yet, but I think it will work well for me soon. BB is drums, Loopy is keyboard or guitar (maybe even vocal backups if I get really flash!?) I can use mixer at home, or plan to use USB sound card inputs connected to iPad for more portable setup.

Happy to send you files if you have an iPad. Loopy Pro is around US$30-40 and MDP is probably half that at best (had them for a while so don’t know current prices). older iPads are cheap but probably too expensive to buy for experiments like this? I’ve also done this on a phone, but screen limitations make it hard.

Let me know if you want to try something like this and I’ll happilly send you my files.