I suspect I have made something of a mess in the user directory I created for my Beatbuddy on my computer workstation. There are multiple project files in there. I suspect I really don’t need more than one. In terms of being synchronized with what is on the SD card I’m not sure what I can clean out of that directory. I’m not sure how much of what exists there was created by the Beatbuddy Manager and how much of it is really necessary.

Here’s some screen shots to give you an idea of what my bbworkspace folder and sub-folders looks like. 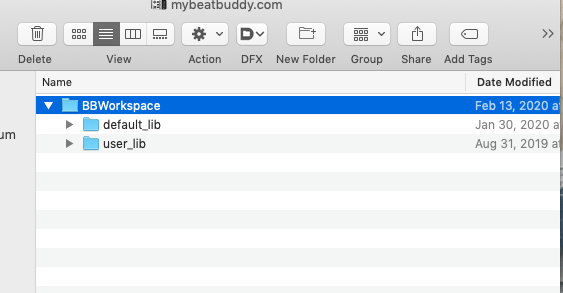 You would have to determine if the contents in any of your project folders are worth keeping. You can do that by opening the project in the BeatBuddy Manager (BBM) and if there’s a particular folder of songs you want (set- or gig-list maybe?), you can export as a folder and then import it to the project you ultimately decide you want to keep. You can delete unneeded project folders from your bbworkspace but before doing so, use the BBM to open the project you intend to keep; save project and then quit the BBM.

Go to your projects folder and delete the project folders you no longer want.
Here’s the contents of my current project 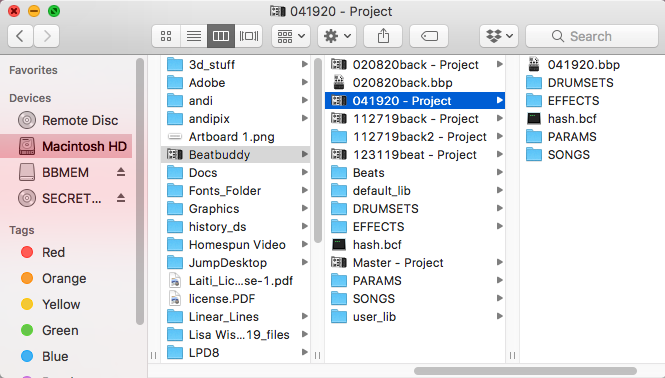 I assume your folder titled “MyBeatbuddy” would be the same as my “Beatbuddy” folder?

I revised my folder to mirror your naming. It appears the currently active project is represented by a vertical icon. When I renamed the folder it seems it created a .bbp file to match. It looks to my like you placed your project inside a “projects” folder. I assume you created that. Are there separate drumset folders created for each project? that seems redundant. Would that unnecessarily occupy space on the SD card? Perhaps there is a written breakdown somewhere of this directory structure and the rationale behind it?

The BeatBuddy Manager (BBM) used slight variations for setting up the folder hierarchy for each version and beta. I think they might have used other conventions for the Windows versions.

One of the betas installed the bbworkspace within another folder named mybeatbuddy.com and I’ve never bothered to change it.

It looks to my like you placed your project inside a “projects” folder. I assume you created that

Are there separate drumset folders created for each project? that seems redundant

Yes and it probably is redundant. However, when you think about it, each project may use different drum sets and kits. This is how Singular Sound developed the BBM to manage it’s folders and files. More elegant solutions may exist but this is what they have provided us with.

Would that unnecessarily occupy space on the SD card?

No because the SD card only contains the contents of the project you export or sync to the card.

It appears the currently active project is represented by a vertical icon.

That’s not correct. All project folders use the horizontal icon while all project files use the vertical icon.

An easy way to identify the current project open in the BBM as well as a clickable path is to hover over the project name next to the Project Explorer. If you click on the tool tip, it will open that folder in the Finder or Windows Explorer.