Hi, has anyone found a way to mount the BeatBuddy on a microphone stand? I saw the question and response about mounting on a hi-hat stand or using iPad to sync, and will definitely explore the iPad sync.

In the interim, I’m just looking to get the BeatBuddy up closer to me for practice and jamming and just exploring with guitar in hand and jamming on various beats even when I don’t have a song in my iPad.

I’m currently experimenting with an iPhone camera mounting clamp with a gooseneck on a mic stand, and it’s not bad, but it’s not that secure because it’s only grasping the BB in one small spot on either side, and, it won’t seat deeper in the clamp because of the flanges on the input/output jacks. .

I’m thinking something like a small mounting platform the prior poster referred to, but wondering if anyone has found anything that fits the bill before I go build something.

I bought one of these for a different purpose, but it would work well for holding the BeatBuddy…
https://www.sweetwater.com/store/detail/MST1000--on-stage-stands-mst1000-u-mount-mic-stand-tray

I did build a stand/table out of an old camera tripod I got at a thrift store which I do use for pedals such as the BeatBuddy and TCH Voicelive Play that I want within easy reach. 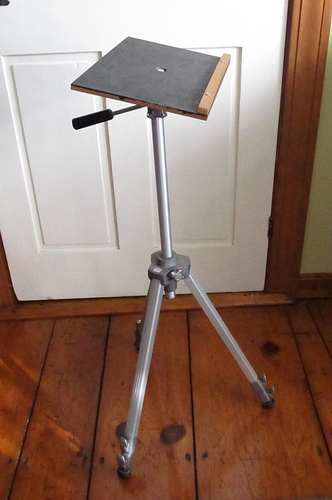 Some of the iPad holders for mic stand would work, too. Just make an ipad sized panel to fit where the iPad should go, and mount your BB to it.

I was also thinking you could adapt a standard bar clamp to hold a BB in place, but you’d have to be careful to allow clearance for the power plug, and to avoid contacting the SD card.

hi from edinburgh just did a gig with bb cable tied to boom stand …all good till …long footswitch cable ,failed to sync with either footswitch or bb but ,in fairness i may have done something in the settings but ,its a good idea ,i think 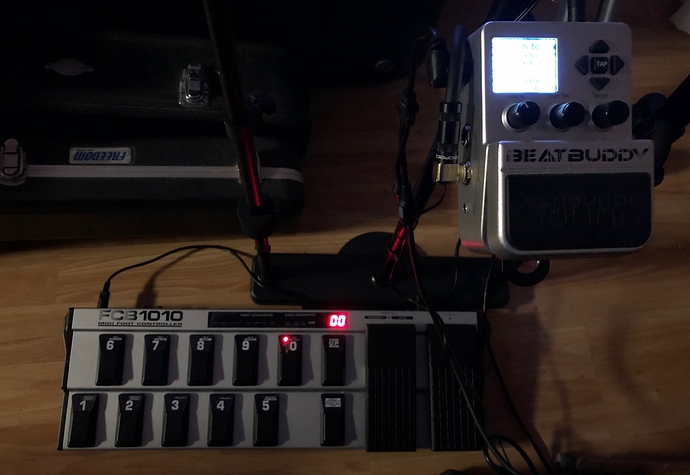 Hi everyone, thanks for the great ideas, all of these are definitely in line with what I’ve been thinking and it gives me some great ideas because sometimes i have my mic stand fully extended and coming in sideways and i have my iPad on a separarate stand, and sometimes the mic is right in front of me depending on stage, so these all allow me to go either way.

As a side note, I’m using an iPad mount from a company called Caddie Buddy (originally made clamps and mounts for people to video their golf swing or mount their GPS) and they have a new iPhone mount coming out for the 10X Max that he thinks will work as a mount for the BB. His mounts have the 1/4 inch threads on the bottom, and he sells goosenecks that have 1/4 on one end, and mic stand threads on the other, and it’s been really solid for my 12.1 inch iPad Pro from a few years ago.

I have the iPad in an otter box case, and his clamp adjusts really well and can hold anything from naked iPad to full case.

I’ll post what he sends me and let you know how it works if i get it.

Finally, on a question with multiple responses: Since I’m brand new to the forum, what is the etiquette on acknowledging each responder? Is it better to do a general response to my original question, or a personal response to each responder? I don’t want to overload the thread if everyone is copied on each response to each person, but I did want to let MarkF48, Phil-Flood, Davie and Aldrin_Cubillas all know I appreciated their responses and ideas and will likely wind up using all of them for different use cases.

I think offering your gratitude in a post in this chain is all you should need to do.

Thanks Phil, I appreciate the feedback and fast response, you guys have been great. My name is Worth, and I look forward to being part of the group.

looks great . i assume you are doing different functions through MIDI . . how are you doing song selection? through MIDI or on the BB unit?

Welcome to the group! I see you are using an FCB 1010. Given that the Singular Midi Maestro has been delayed again, might you share you midi scheme with the group? The FCB 1010 is a very powerful device, and I believe it would be seeing more use among the group, were it not for its size. I have one, which is dedicated to my Adrenalinn III, but if I saw a good versatile setup for the BB, I’d be willing to do a bit of programming.

Yes, I set 1 bank to move to select songs within a folder though FCB1010 is limited to 5 PC messages. What I did is create 1 folder with only 5 songs and assigned each one to the 5 switches. BB has designated CC commands for folder/song selection but FCB1010 is not built to handle MSB/LSB switching, thus, I can only have 1 folder per sd card to make it work. In my case, bank 08 is where I set to select songs up to 5 songs and bank 00 to switch to song part 1-5, 6 for transition, 7 for fills, 8 to control tempo, 9 to control volume and 10 for outro. Hope this helps!

Hi Phil - yes, can’t wait for my pre-order midi maestro so I get to use the old but reliable Behringer product…not to mention, it’s the cheapest alternative

I just use the CC113 and assigned value 1-5 since FCB1010 is limited to 5. I posted picture to my reply to PhilGillis. Hope it makes sense. Btw, I really appreciate your contribution to this group…thanks!

looks awesome . . thank you so much for sharing!

Thanks for that explanation. I was afraid that there might be limitations that keep me from going that route. I currently use OnSong to select songs and set tempo. I’ll be happy when we get the Midi Maestro. 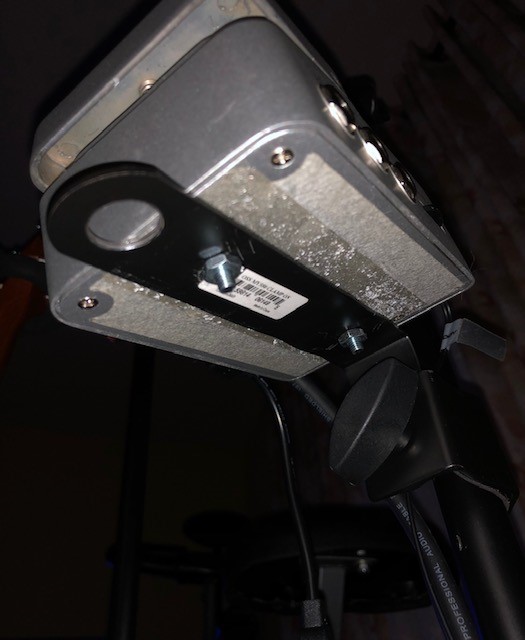 I zip tied the BeatBuddy to a thin piece of wood and used my tablet mount on my mic stand. 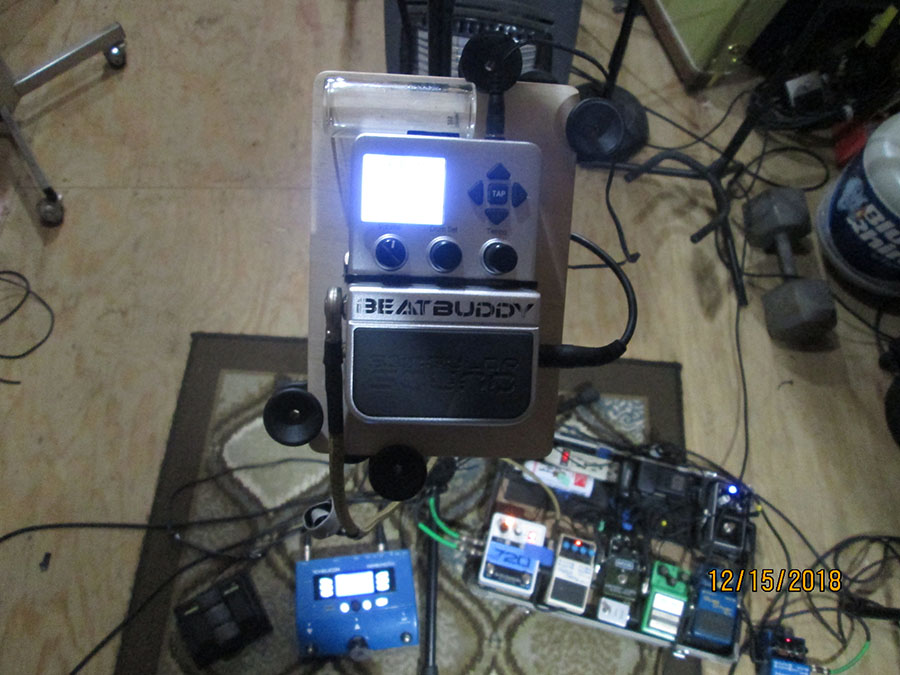 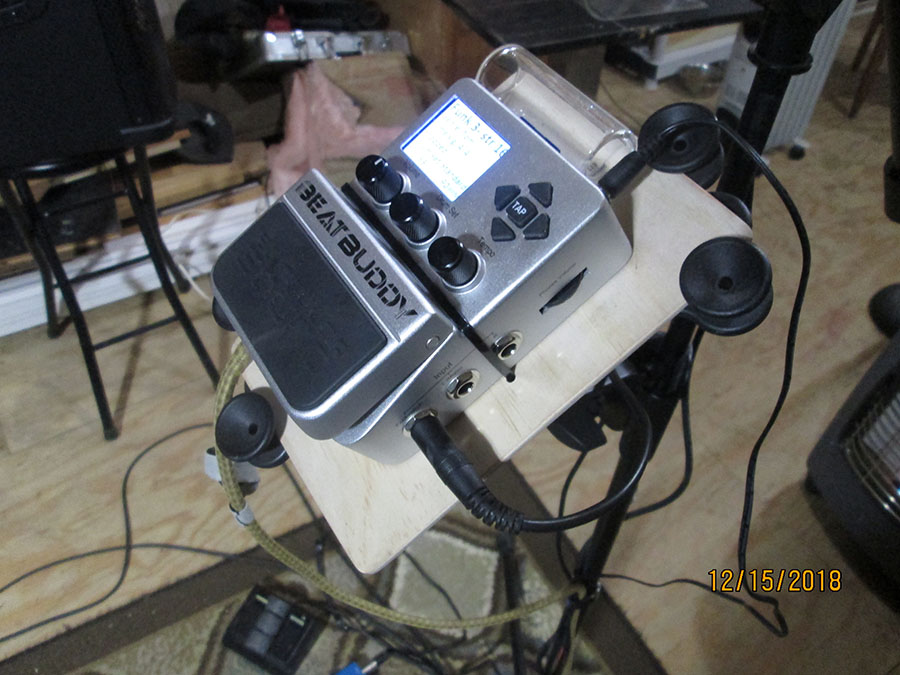 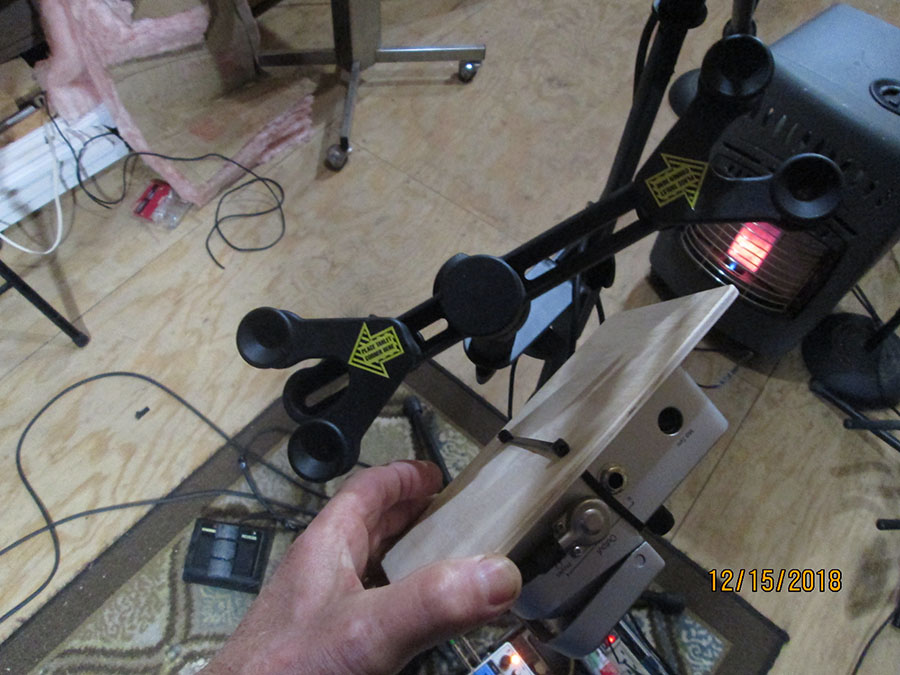 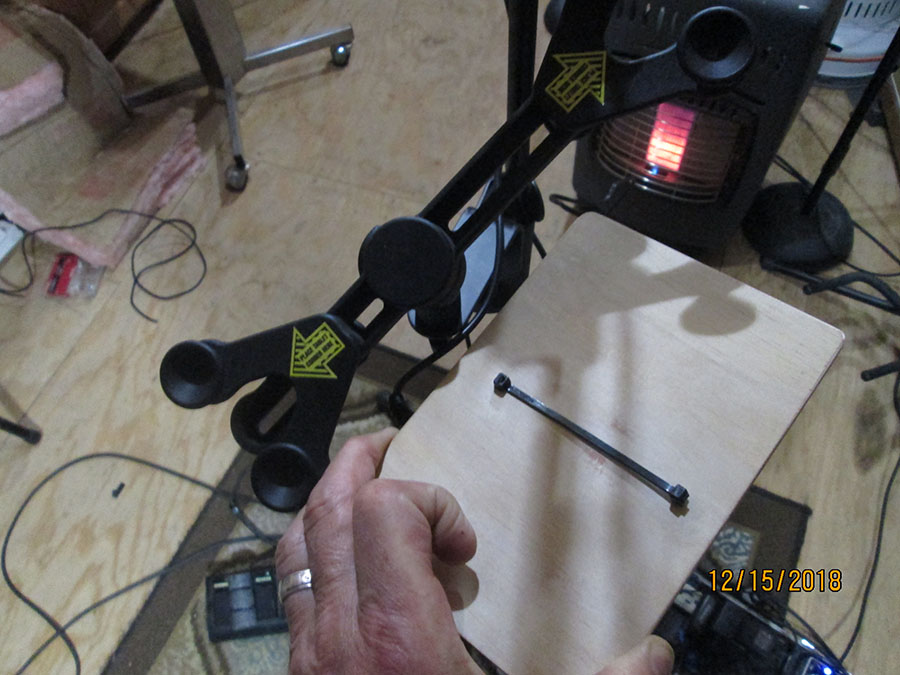 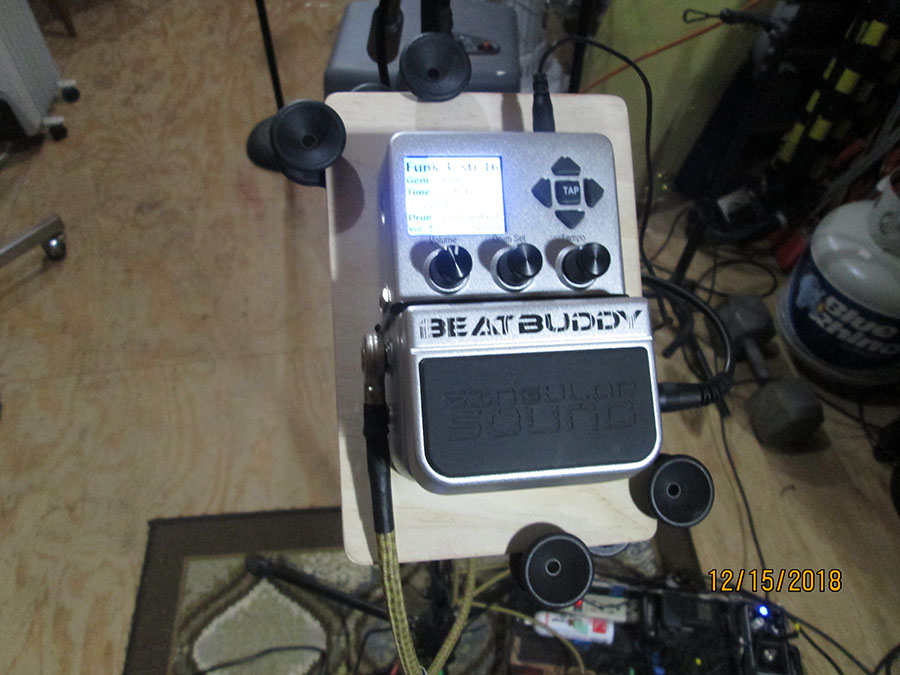 Hey everyone, catching up after the holiday and wanted to thank everyone for the additional submissions, these are some really creative solutions. Aldrin_Cubillas, thanks for the follow up photo, i was wondering what it looked like screwed to the bracket and if there was a little room in the body for the heads of the screws, and tlink211, I like the zip tie idea to the board, vecro keeps peeling itself off and the zip tie is simple, easy, and easily replaceable.

I received the Max phone mount from Caddie Buddy, and its great for rehearsing at home, but I’m nervous about holding the BB with minimal contact points in a performance situation when people may knock it over, so I’m going to keep experimenting. 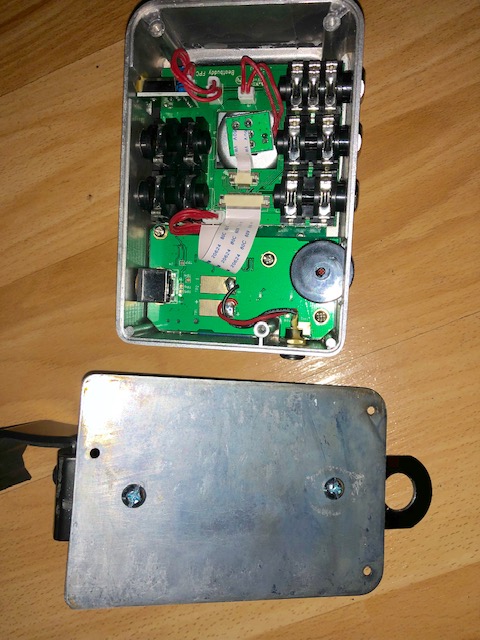 btw, i updated to Morningstar MC6 MKll midi foot controller and it’s way better than Behringer FCB1010 and i am happy with it… 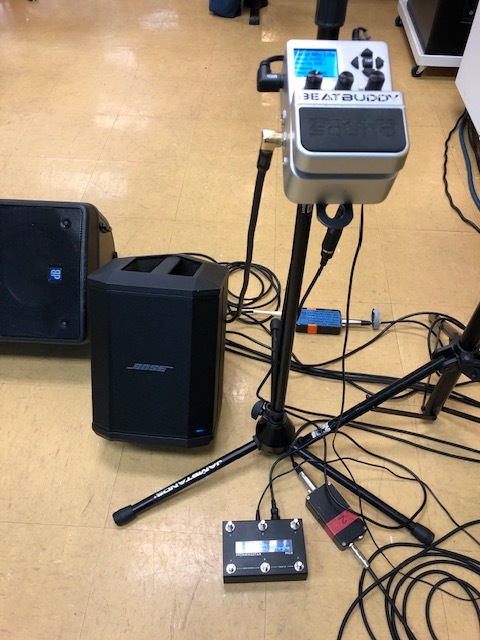