I edited a new song a few days ago, the song is whole from beginning to end (without parts).
It’s with the Rock and Bass kit, but I can’t save the tempo that is at 120 and I want to set it to 180. When I open again BBM is back at 120 bpm. I have also tried editing, I set to 180bpm, then Apply, and finally save, but neither does the correct tempo remain when I open it again.
Forgive me but I have been with BBM for a while and I am trying to understand this program every day.

Are you using a digital audio workstation (DAW) such as Logic Pro X? If so, open your MIDI source file in LPX and select all of the regions of the song.

Sometimes the very first bar of the song will be 120BPM and the rest of the song after that first bar is at 180. With all of the song selected, change the BPM to 180, and export the regions you want to a MIDI file. They should now appear in the BeatBuddy Manager (BBM) as 180.

Change the default tempo for the song in BB Manager, in this area: 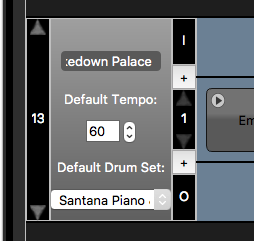 Then, Save Project. Next, Synchronize Project, or Export Project to SD card, if Synchronize is not available. When you quit and restart BB Manager, the new tempo should be shown as the default tempo for the song.

I have effectively changed the tempo in this area and now it seems that it has already remained at 180 when it opens again.

Then, as Persists indicates, the problem could be a tempo midi command embedded in your file.