I just want to say that Singular Sound has redefined what I though was musically possible (for a solo act). The trio of Maestro, BB, & Aeros have quite literally transformed my musical world. Before 2020 I had spent nearly 25 years playing in band and never considered a solo act. Covid hit, I intended to only get the BeatBuddy and when I saw what the other pedals did I knew I had to have them all. I feel as though almost anything is possible with these pedals. In two short years I have created a successful one-man band situation and it’'s all because of singular sound.

I actually own two Aeros’ and three breakout cables and tell anyone who will listen that these are the best pedal ever made.

Long live singular sound. You guys are the best.

We feel the love! Thanks for being a part of the family

I’d like to especially mention the replies to feature requests saying that SS will not implement a given request. This gives their communications more credibility, and is a pretty rare practice. Many companies are so paranoid about offending someone, they go in the other direction, saying yes, maybe to everything that comes in, and that practice is offensive. heh.

+1 here too. I am realizing my looping dream with Aeros, BB and Maestro. Previously did Boss, Boomerang, Ableton. My gigs sound like the record. I’m playing 2-3 gigs a month, making double what I did in a successful cover band. I’d say what I’m averaging per gig, but that might be tacky!

I own a Maestro that I don’t use nearly enough and a BB that keeps me gigging every weekend. David & Co know exactly how much I love their products and the fine folks running the company – including Brennan!

The trio of Maestro, BB, and Aeros is absolutely the best on the market.
I am gigging 2-5 times a week and I often heard from folks " we thought it was CD playing. ):

you gotta use that Maestro…it is a huge expansion to the BB. It has the tap tempo and tempo features, plus the ability to move between grooves in non-sequential order is huge.

For sure – if my pedalboard had a third row…

Thank you all the for the love, it means a lot to all of us to know our hard work is being appreciated 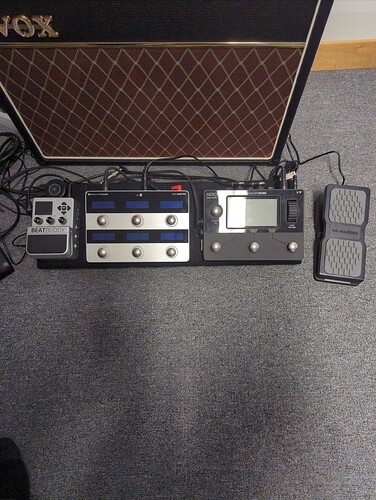 Just set it on the ground next to the rest of your pedal board, if you have to! The MIDI Maestro really helps with live performances.

How quickly can you access loops? I would love to use Aeros live with my band for impromptu jamming but currently have stoop down and change loops which sucks! Pedal access to scroll through loops would be awesome!