Hello guys.
My beatbuddy died last summer.
It suddenly stopt (power off) and I smelled like something has burned inside.

Today I opened the pedal. See picture.
Can this be fixed? 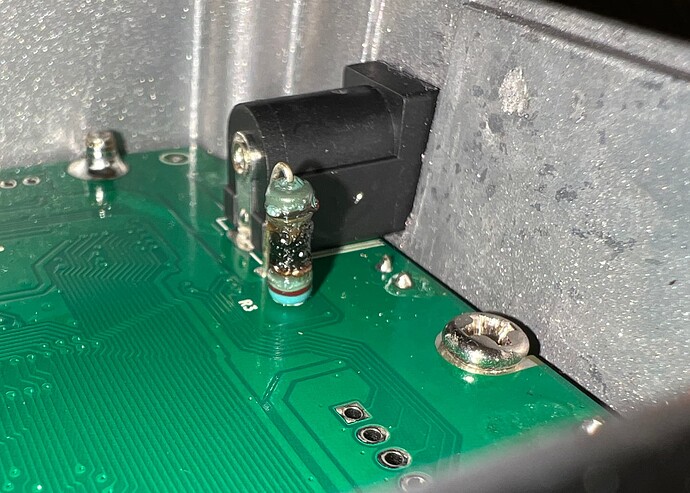 Sorry to see that.

Not knowing if or what else could have been damaged, I would guess not. Unless you can find the value of that component that’s burned (it looks like a capacitor but it could be a resistor). If someone has their pedal open, they might be able to tell you what it is as well as the value.

You can take it to an electronics repair shop take a look at it but they might charge you more than it would cost to repair the pedal. Do you have a friend that’s an electronics hobbyist? If so, that might be the route to try.

You can ask Support, support@singularsound.com if they have a schematic they can provide you.

It;s not a capacitor, if you look on the PCB it says R3, this means it is a resistor.
If someone with a mini2 is willing to look at the resistor to what colors are on there you can replace it with the same resistance. It seems like a 0,5 watt

Okay! Thanks man. That would be great. Can someone with a mini2 see what resistor this is? Do you know where to order this resistor?

Thanks for your answer! I can ask my dad. He is more into electronics than me! It would be great if I know what resistor I need . I will send an Email to the mailadres you posted! Thanks again!

Don’t want to sound too discouraging, but the resistor likely burned for a reason such as another bad component that caused the resistor to overheat and fail. The other possibility is an incorrect power adapter may have been connected to the BB2 which caused to much current to flow in the resistor.
If you can find out the value of the resistor it’s worth a shot to see if it can be fixed, but don’t get your hopes up too high.
From its proximity to the power jack, I’d guess its purpose may be to limit current flow from the adapter and is likely a low value (maybe 100 Ω or less). Hopefully someone can show a pic of the insides of a good unit that the value can be determined.

Thanks for your explanation!
I used the original power adapter. So I don’t think that is the cause.
To bad but I think I have to give this beatbuddy up.

I found a youtube video about the repairof a BB mini1, there the resistor is a fused resistor of 0.47ohms.
He also replaced a chip, he doesn’t mention what type it is, but maybe you can figure out on your BB mini2, if there is a similar component in yours. Fixing my beatbuddy mini 1 no power problem - YouTube
If you don’t know anyone who can help you fix it besides your dad, send me a PM, maybe I can help.

Thanks for your help! Unfortunately I have to give it up. This takes too much time in relation to the costs of a second hand BB mini. But again thanks a lot for your help!