Send BPM from Songbook Pro to align with selected song

I wanted to follow-up on this one and see if anyone has attempted sending MIDI from SongBook Pro using the most recent version (using 22.1.7)? I ask, because it looks like they have added some basic MIDI abilities via the song (edit) function that has some options such as…

If you change the top entry from Control Change to Program Change, then you get three additional options.

The only option you seem to have for kicking off the send of the MIDI command is on song open, which I guess is OK.

I’ve watched some videos online, all of which seem to be demonstrating this with OnSong, and am wondering if the following settings on the Beatbuddy still make sense if trying to send the commands from SongBook Pro. Basically, if the line starts with — it indicates the menu selection, if it starts with +++ then that indicates the option selected.

GOAL: I just want to have SongBook Pro select the beat that aligns with a song that I load up in SBPro. Any help / suggestions people can provide here would be AWESOME!

I was hoping you could help educate me a bit on what each of the values above mean/how you knew which numbers to use to identify folder, vs. song, vs. tempo? etc.? So from the above…

Hi Bob, the @10’s are always telling it to send the midi commands on Channel 10, I have multiple midi devices so I tell my BB to only listen on channel 10, and I then send specific midi commands just to it. If you only have the BB in the midi chain, you can leave these off.

The first three commands CC0 CC32 and PC are actually all one command. The first two CC commands tell it which folder to select, and the PC says which song in that folder.
If you want to select the first song in the first folder, it would be CC0.0 CC32.0 PC0
If you want to select folder 129, song 4, it would be CC0.1 CC32.1 PC3
There’s a table in the BB Manual that shows an example of selecting folders and songs.

I hope that helps.

Hey @TimMcG , thank you SO much!

This is hugely helpful and much appreciated.

So I’m still trying to work through getting this all working with BeatBuddy and am running into a snag, wondering if you may have any ideas.

I tried adding the code into the song itself and I could not get that to work at all. I did notice that when you edit a song, on the Advanced tab, there is a MIDI function button which brings up a dialog to enter in some MIDI Events.

Here are a few screenshots of the options that now exist in SongBook Pro when you edit a song.

The only event that seems available is on ‘song load’ which I’m totally good with. At the beginning, you just hit the + symbol and that brings up the next dialog. 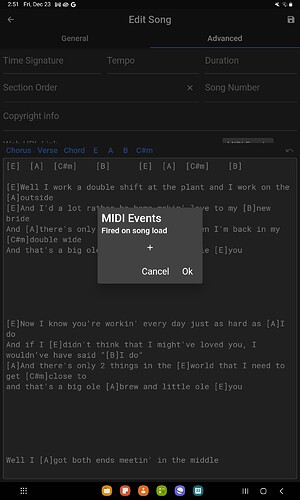 From here, I have found that you change ‘Control Change’ to ‘Program Change’ 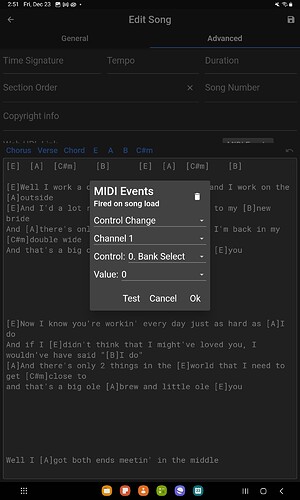 That gives you a few extra options on the dialog that look like this. 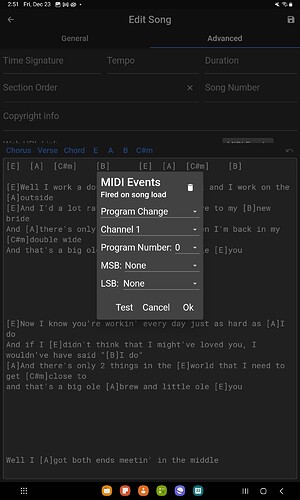 What I have found so far that has worked is to set ‘Program Number’ to the song number and while working in the 0th folder, that works as expected. In doing this, I have left MSB and LSB to 0, not for any reason other than I don’t know what to set them to. Since I was working in the first folder (0), all seemed to work as I wanted and when I select a song from my list within SongBook Pro, it changes to that beat on the beatbuddy (I created matching setlists on the beatbuddy and songbook pro).

The problem comes in when I try to do this with my 2nd setlist folder. I can’t seem to get it to select the song in the 2nd folder. I have tried the following settings and none have worked yet - or I’ve done something wrong.

Any help/direction you may be able to provide here would be awesome!

I’ve been referring to Songbook Chordpro by Linkesoft, and you’re using Songbook Pro (these guys really should have come up with more unique names for their apps). So I can’t say for sure, but here is what the manual says:

So I guess you would have to set the MSB to CC:0 with the value of 0, and then the LSB would be CC:32 with the value of 1 (for folder 2) and then whatever song would be set in the PC.
I can’t really see how you would set the values on the screens that you shared, but hopefully someone with more experience in Songbook Pro may chime in.

I’ve been referring to Songbook Chordpro by Linkesoft, and you’re using Songbook Pro

Thanks for pointing this out. I’ll admit I was confused as well with the two similarly named apps so I moved this one to a new thread.

Thank you so much Tim for the excellent explanation and examples. I was able to get it going first try by following your instructions.
Much appreciated!

Replied to your post this morning. It’s out there floating around somewhere…

Hi Bob, at the risk of having a double response since my reply of two days ago is still not showing up, I want to specify that there are two versions of SongBook Pro by Linksoft for Windows PC but only one of them works with MIDI. The Windows version and the Tablet version are available but only the Windows Tablet version (touch screen) is MIDI capable. However I find it is lacking in other areas so I keep both versions (not expensive).