Stopping Aeros with one touch?

I have mostly been doing loops with the beat buddy and using the double tap on BB to stop songs (I still feel like a total spaz doing this at the end of the song).

I was trying out more loops with acoustic guitar using freeform mode. To stop the loop requires double tap on the aeros Play/Stop button, but the cheat sheet says it will also stop with a single tap: 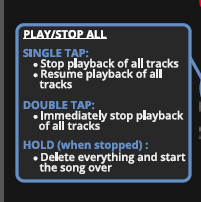 Is this just a typo? Would sure be great if there was a way to stop with one press on Play/Stop button…can’t figure out why it’s set up that way… hopefully i’m just missing something that you guys can show me!

I do have the MM, too, which has a stop now set up in aeros mode, but it can be a little tricky to find the right page on MM during the song.

I thought maybe I’d just mute the part using the MM, but that doesn’t usually work for me (although I need to give this a closer look…probably user error)

On a related note, I had several fails trying to switch from one part to another in Free Form… the current part kept playing and i had to wait for it to finish again. the second part was flashing ‘cancel part’? (which i think means that it will play the next part after the current repeat of the part that’s playing and I could stop that from happening if desired)

does the free form mode require more lead time to switch to next part than the other modes? (my usage here is typically play full verse on one part and full chorus on other, so the loops are not just a bar or two, if that matters)

Hey just set the Aeros to Stop Immediately in the Device settings and that will happen! The reason it does not do this now is that by default it stops at the End of the Measure/End of Loop in Quantized/Freeform mode.

We are also working on MIDI commands dedicated to Start and Stop soon, so stay tuned on that.

The changing part issue you are having are also likely fixable by changing Change Parts to Immediate instead of to End of Measure.

Let me know if this makes sense,

Hi just started using Aeros Looper and I want to use it as a Master Midi Out to Start and Stop External Midi Gear. Can’t find anywhere in manual to do this. All I want is Start/Sop out from MIDI out of Aeros when I Start or Stop a Loop. Am I missing something here or is MIDI Out not implemented?

Am I missing something here or is MIDI Out not implemented?

We do not yet have any master capabilities mapped, the Aeros currently is only working as a MIDI receiver (slave)

This will not be the case for long, as we are already getting closer to the MIDI master release.

Thanks for the question

this was helpful for my question about switching parts and I seem to have the hang of muting the tracks - thank you!