Record a freeform loop. This has established the loop unit size.

Record on a new track. Obviously there are no beat or measure markers in free form mode. But there is a loop size as established by the first loop. When recording that first loop on a second track, we know that second track loop length is going to be a multiple of the first track length.

But as we approach that length there is no visual feedback. We can’t rely on the red line in the first track because the second track start point could have been anywhere.

There’s also the circles (“pie wedges”) to the left of each track. They are a bit small …

The circle doesn’t have anything to go on during the first record of a track in freeform mode. It can’t even count bars. So while they are useful for overdubs they don’t provide what I’m asking for in this request - knowing where the next loop point is when creating a track.

Not sure what you mean then. I just ran test in 2x2 with Syn Length and No Quantize to Measure (I usually sync to start). Record first track; the pie wedge is displayed as I record the second track? Also other than the red bar being a bit thin and hard to see while standing (SS is so hard to make that red bar be three or five pixels wide … sheesh), it seems to meet your need.

In any event, you might consider adding another description, perhaps step by step? Or perhaps a quick sketch of what you want? It may just be me, but I don’t really understand what you want. Just saying…

(apologies for blurry pictures – it was early in the morning)

Start secondary track record at some arbitrary offset from the start of the first track loop. 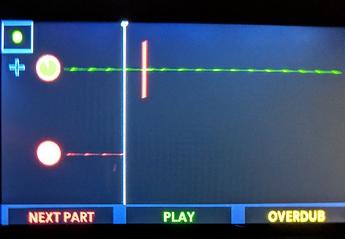 Note: second track pie is a solid red – so isn’t giving us any feedback at this point. 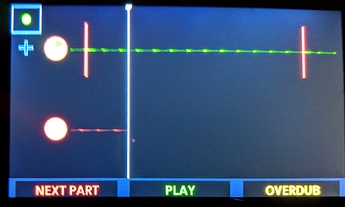 Interestingly, the Aeros knows exactly the right place to draw that line, because it’s able to show it when we push “play”: 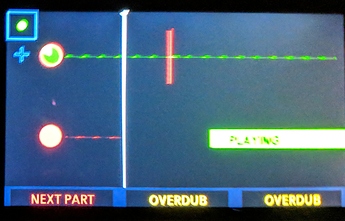 Where the “PLAYING” block starts is where I’d like to see a “measure” line (of course it’s not a measure in freeform mode, but it’s serving the same purpose) regardless of whether playback has been activated or not. This gets even more useful when the second track is a multiple of the first track’s length – and I don’t see any reason why that measure line couldn’t be on the second track when in playback mode – again, just like in quantised mode, we can see the measure lines all the time. The only thing it’s not possible to show (at present) is the thinner beat lines – that’s fine.