Thank you beat bud. Got us outa the shit when our drummer flaked on us. Drummer pulled out 2 days before gig so we Used my beat buddy for our 5 hour gig instead. I had been practicing with the bb for a while & had created & Pre loaded about 80 + songs on it. Songs range from Garth brooks (country) all the way through to AC/DC . I arranged in order a set of 56 songs in bb manager. It sounded great and beat buddy worked most importantly. We are a 3 piece band now 3 vocals, bass guitar, rhythm guit, lead guitar & Doubt will ever go back to having a drummer again
I don’t get what is so hard in programming the beat bud. there are clips on YouTube with people showing you how to do things & this forum has help me also… Next gig I will try to record couple of our songs either vid or audio & post them up here.
Thanks again guys

Congrats on a great first show! I’m with you – I might never go back to using/paying a drummer again.

The programming is a trickier beast: I’ve fallen into a consistent pattern in programming, but I actually program all the parts of all the songs we do, I use very little that came with the BB as-is. It’s that kind of programming that people complain about. If you can assemble songs from the parts that came withe the BB, that makes it a lot easier.

Blues Song 1 and Country Songs 1 and 2 are particularly useful for straight assembly.

About 25 percent of my song list is built from scratch. The rest are heavily edited by me to fit my needs. I can see why people are frustrated with the BB when they don’t learn to edit and I almost feel sorry for them. Almost… Do you guys find the need to adjust volumes and velocities to keep all tunes at the same levels? I spent a week creating a formula to ensure the same levels across all songs and drum kits. It paid off. My new QSC touchmix showed glaring errors that needed to be fixed with levels. 3 years now gigging live with BB and even though the manager is clunky, I’m extremely happy with the results.

I haven’t yet had the need to change volumes on anything yet Im sure the more I use it live i will start to notice some songs my need a little more punch. I use the rock kit for almost all of our songs which seems to sound alright

Jim what do you edit ? How can beat buddy sng files be brought into a midi editor ? Which editir do you use ? BB manager I guesg is only good editing tempo and deleting some parts ?

I use the one press method. You can edit the parts of the song such as the Intro, body of the song etc. I put the entire song in the intro section. And a Null, or a silent file in the main body of the song file. Once the intro, which is the actual entire song plays, it goes to the next part and loops in silence. I use free midi editor download. I Set my drum kit levels all equally and the song event levels to the same levels. If you’re new to this, you probably won’t understand what I mean. I’m going to do a tutorial on my methods.

I have tried one press no good for me
Problem being if the singer misses their que your fucked, nobody knows exactly where you are up to in the song and you can’t throw a roll in whenever you want. Great if you are a one man band but once again you miss your que fucked

I have a few that I can switch and riff on I want. But you’re right. Effed bigtime on a missed queue. When I played with a 4 piece band for 35 years, we usually played the set songs the same every time. So I’m used to it.

Jim have you put a tutorial together for midi editing ?

I have to figure out how to add narration while doing it. A work in progress.

Ok I will await

This is nearly 40 minutes long and goes over things pretty quickly. If you have questions I would be happy to go over specifics. There are a few things that I thought about after I finished it but I will assume that you’ll discover them and ask. You’ll notice a echo or doubling of the drum parts in the video because I had on a mic and it was also going directly into the system. It’s annoying but you’ll get the point. Let me know what you think. Never done a tutorial before.

Thanks Jim I’m looking forward at having a look at this when I get some free time !

Can one edit an sng file in this software as well ? Say lower its volume add bass etc to an existing sng ?

You can only edit the individual parts. Or the part that I put into the intro. The entire song in the sng file can only be accessed through the beatbuddy manager and you can’t edit for now anyway.

So if I understand this correctly to make a song you start w midi files which can be edited and then drag and drop that file into the beat buddy manger which converts it to to an sng file. That file can then never be changed except maybe the tempo and the drum kit used to play it ?

Yes, it can be changed. You can edit the midi file again and re-apply it to the song, or you can export the midi from the song and edit the export.

Right-click any part of a song to get the context menu and select Export MIDI File ... 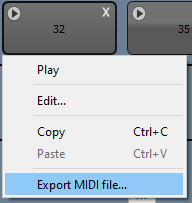 You can do this on any song