What is eta for the ability to import backing tracks? I seen in the past statements that it is a couple months out, but it seems to be always a couple months out. This lack is keeping me from doing anything meaningful. If I had known that the Aeros lacked this rather fundemental ability when I purchased it, I probably wouldn’t have.

By “backing track” do you simply want the Aeros to import a track and play it once? Or do you want that plus the ability to play loops over that?

You can do the former today if you record it in real time. There is no way to import via sd card or otherwise. If you press Stop with EOL setting anytime while playing, then the backing track will play once and stop.

The latter is not what I’d call a common or fundamental looper feature. It seems like this is a few more features beyond the just shipped “lock tracks” feature:

I have owned two different loopers, they both had the ability to
Hook up a usb cable to my computer and then copy wav files to
certain directories (memory slots) on the looper which I could play (and loop) and jam to. I just looked at headrush looperboard, it also has this capability,
Although much more advanced. I don’t care if this is done via usb or sd card. I can certainly copy to a sd card

Then you just want the ability to load tracks onto the Aeros … which is simple and something we hope SS will add easily.

As a work around today, you can plug the audio out of any device that can play your backing track once into the Aeros and record it.

The 2:30 minute time limit may be your next issue.

Yeah, the time limit has to be increased. If it needed to have a limited what would be a reasonable maximum?

I’ve only had it a few days but this limit just won’t work for me. I need to prerecord backtracks so I can loop with them. I really like everything about the Aeros and can wait for other enhancements but the loop time limit is a real show stopper. Hopefully the ups will modify this soon.
A lot of users including Beat Buddy are looking for one button hit capability. Many of the user loops are written that way.

Please SingularSound create this enhancement or give us a work around?
Thanks.

At least 20 minutes. I guess it depends on how you count ‘total time’. I assume it is counted as 6x6. Maybe 2x2 allows more time?

You are basically on the same trajectory I was on when I first got the Aeros. I wanted to replace the EHX 45000 where I was storing ANY length of “loop” inside a single preset, importing WAVs from my DAW via SD Card and using MIDI to recall any of the 99 presets. It doesn’t do any of those things right now.

Why did I want to change from the 45000? Several reasons: I really liked the idea of having 4 route-able outputs compared to 2 in the 45000, there were 6 stereo tracks (45000 has 4 mono and 1 stereo) and I really liked the visual feedback of the screen.

Some of that is on me for making assumptions and throwing down my money without much to go on other than a couple videos; some of it is on SS for not really outlining the features of the Aeros well or not stating that some features would not exist until after release.

I’m glad that today I’ve found another use for Aeros that is working, but as a “backing track” machine in gigging situation, it’s not there. Not without jumping through some significant hurdles every time you create, trigger, or even load, a song.

I have to say I’m really disappointed about the inability to import from a DAW and the per loop time limit of 2.5 minutes. I’ve tried iPad and small recording decks but the Aeros promised to be the ultimate solution to live playing. Not having the option to record a backing track and then loop over that for a solo performer is a real disappointment. I can’t be alone on this?
The good news is that I also bought a Beat Buddy and it is amazing. The Aeros has so many possibilities with a few more enhancements. I hope they add unlimited or at least longer loop times sooner rather than later. It would make a lot of users and prospects very happy.

I’ve said a lot about that myself … however, I will also say that the Aeros as a stand-alone looping device (actual loop creating, not backing tracks) is pretty much untouched by other products. So while I chime in once in a while to say a device like the EHX 45000 makes a much better backing track machine, the EHX 45000 in no way comes close to being a looping machine on par with the Aeros. It’s a matter of perspective and need. I don’t see why the Aeros couldn’t be both and then it would be untouchable in all aspects.

I agree, even loading a time unlimited backing track from a DAW or creating a backing track directly would be huge. Then that could be the trigger to one press start and stop a song allowing other loops/tracks to be added to it to complete a song.

I’ll have to stick with Auria on my IPad for now. I do love the beat Buddy though and use it to record drums on Auria.

Hopefully they will integrate this simple concept, which would make, as you say, this unit to be a total solution.

All along I’ve been under the assumption that the loop length limitation is the issue but the manual says that it is a track limitation to 2.5. It seems like this would be an easy coding solution but maybe the track file structure is just too restrictive or complicated.

I would like to add my voice to the requests for backing tracks and a longer loop time. Don’t get me wrong. I love the Aeros and BB and have added the MM to my setup as well. They all make a great combination. I have programmed the MM using the Android app on a borrowed phone as the IOS version is not functional.

My intent in putting this setup together was to replace three Digitech Jamman Solo XTs synced together. The Jamman is a stereo looper series that is quite good but with dismal software. BUT, it is capable of pretty much any length in tracks, and most of all it is possible to download any backing track with overdub capability so that it can be used as a full backing track unit for a incomplete band (drum tracks, synth backings, etc…).

Obviously I have not been able to replace them at this point. But I am hopeful that SS will introduce the backing track feature soon.

I do not agree with the comment that backing track downloads in a looper is a feature that is not typical of loopers. On the contrary, in my humble opinion, a looper that does not allow computer control of download of backing tracks and loops is simply not a complete modern looper.

Best to all of you and thanks to the mods, Quad and Persist for their endless commitment to the forum.

Just a pic of my three SS units neatly mounted on a floorboard to show you my passion and enthusiasm for these units. 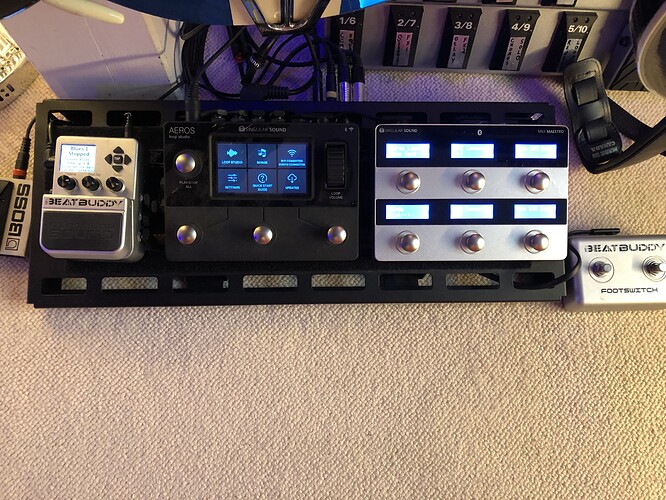 Man, what a clean looking setup!

Where did you get that size rack?

Its a Rockboard Tres 3.2 equipped in the back with a Rockboard Mod 2 and underneath with a Cioks power supply. Ideal for the three Singular Sound units together in one simple board. Slips in its own well-padded softcase for traveling and can be taken anywhere.

That’s my simplest board yet. I will refrain from posting pictures of what my other boards look like as they are a little more complex and this is not the right place for that!

Was just reading through this thread again.
I am now recording prerecorded backing tracks from other sources to the Aeros in Freeform mode and hitting the next part once it hits 2 minutes. I can then record the whole backing track. The change in parts is seamless and works well but in order to play it back I have to press once to start the song, immediately press next part to cue the rest of the song and then press again to stop at EOL.
I’m buying a RC-5 stereo Boss pedal to play the songs recorded in the Aeros
to simplify my live performances. Aeros requires too much attention especially after playing 50 tunes that way during a gig.

The RC-5 has a built in “stop after playing loop” called 1stop built in.
It can record up 1.5 hours in one loop.
I know of no serious looper that restricts its loops to 2.5 minutes.
We are all retrying to find workarounds because the Aeros is something special. Frankly I can’t get enough of it and am looking at it as a production tool as opposed to a performance tool. Right now the Boss RC-5 will give me stereo, 32 bit sound and 99 banks of songs with up to 13 hours of tunes. I will not use the built in drums on the Boss. and will record the Beat Buddy on the Aeros for drums before re-recording the final songs with all the foot presses to the Boss for a one press performance for each one.
I really hope this changes and the Aeros will eventually offer longer loops that allow a one press play through along with file import.

+1 as well. Just waiting for this to be implemented before I buy.