Had anyone ever had to replace the SD card reader on their BeatBuddy pedal?

Shortly after I got my pedal I noticed that only 2 of my 4 SD cards actually worked in my pedal (The card that came with the pedal and a 16GB card I already had). The others either displayed No Card or No Songs. Sometimes randomly on the same card. Sometimes if I pushed down on the card slightly while it was in, I could get it to read the card, but only while I was pushing on the card.

I even went so far as to mail one of my “non-working” cards to Persist, and he tested the card on his pedal. It worked fine.

So I’ve managed to mis-place 1 of the cards that works, and I’m down to 1 functional card.

I just bought two 4GB Series 10 Verbatim SD Cards (30mb/s transfer rate) and NEITHER of them work in my Beat Buddy. I feel like it has to be something wrong with the reader. Is that something that can be replaced? I had a support ticket a while back, but since I still have a card that works they weren’t willing to replace the unit.

I love this pedal but I’m really concerned that I’m eventually going to be left at a show with no working cards.

With its diverse array of authentic, passion-driven features, the BeatBuddy stands tall amongst the best drum machines for beginners and experts alike.

Although it’s possible that the pedal slot reader has gone bad, I’ve not read any posts where users have successfully replaced their card reader.

Since you previously opened a support ticket (and hopefully while the pedal was still under warranty), go back to Support, support@singularsound.com and ask them to reconsider since your issue now seems to be happening consistently.

I synced to the new cards using the BBManager software. Both new cards are Verbatim Series 10 cards formatted Fat32 (out of the box). Both cards show “No Card” or “No Songs”. Again, sometimes I can get them to read by pressing on the card slightly while it is loading.

My original card that came with the pedal is the standard 4GB with the Singular Sounds logo sticker. I sync it exactly the same way (using BBManager), and it works consistently, every time.

If you haven’t already done so, take a good flashlight and inspect the insides of the reader slot for anything that may have lodged in it and perhaps preventing a solid connection to an inserted card. Maybe even a blast of canned air for good measure might remove something that can’t be seen.

Update: I have been able to get things to work, but I think it also proves that there’s something off about the card reader on my pedal.

So I wrapped 2 layers of scotch tape around the non-working card, then low and behold, the card worked and was being read fine. But then after playing around with it and swapping cards some more, I realized that it’s still hit or miss and not reliable. It also sometimes gets in this state where it has all the folders but can’t load any of the songs. I still have to think this is hardware. 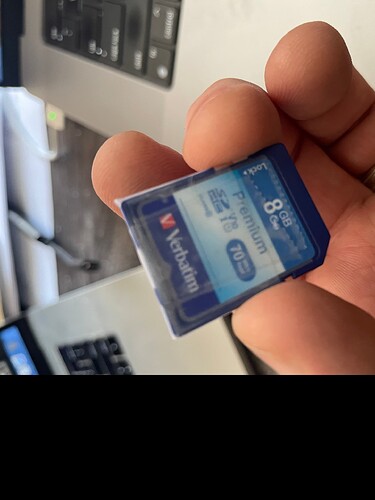