BeatBuddy Manager Goes Open Source: What this Means for Users, Our Development Priorities, and How You Can Get Involved

As I’m sure you’re aware given the title, we’ve decided to make the BeatBuddy Manager Open Source. This post will let you know what that means for you (both as a user of the software, and as a potential contributor to the project), and what our current development priorities are.

For starters, here’s a link to the repo: https://github.com/singularsound/openbbm.

As of this post, we are officially, publicly, open source. This doesn’t impact the current live production version yet, and there is currently no executable for the open source version. So as an end user you’ll only be able to:

In the present you can download the code and compile the latest “on development” version. However, in the future you will be able to download and run a stable version (more on that in the development priorities section.)

If you are a developer and want to contribute to the project, the GitHub repo includes information on building and deploying the open source version of BBM.

With our recent expansion of the development team, the BeatBuddy is no longer sharing development man hours with other products and will have its own developer working full time on the project.

Meet Julissa (@julissadantes ). She will be and has been working full time on the Beatbuddy manager, and will help to ensure that the open source code is well maintained. We also have a quality-focused team member helping us ramp up our test suite, so we can prevent regressions and increase the quality of the project.

Already, we have some tracked bugs in the repo which were carried over from the last testing session we did. As you’ll see in the repo, we’ve been steadily working on patching them, and bug fixes will continue to be a priority.

In addition to bug fixes we’re also pushing towards finishing AutoPilot functionality, and introducing automated tests. The automated tests will help ensure greater stability and fewer bugs in the future as well as speed up the development cycle both internally and for those contributing to the project.

Over time, the automated tests will gradually test more and more code. The build tools (what allows us to make the code an executable) have proven to be brittle for the purposes of introducing tests. We’re looking into that. In the meantime, we’ve an ever-growing body of manual tests which aims to be exhaustive and gradually automated.

After finalizing AutoPilot and creating the tests we plan to work on and release an executable, meaning it will be available for use by those not using development environments (end users).

Due to the peculiarities in the development process up until now, this version is somewhat disconnected from the publicly available BeatBuddy Manager. As such, some features, bugs, and workflows may be different than what you’ve seen before.

We look forward to working together on the future of the BeatBuddy Manager.

@julissadantes I don’t see the Sync issue listed. It’s a big issue, IMHO it should be prioritized above new features like autopilot. Is it fixed in the open source version, not tracked, …?

The Mac not syncing bug was fixed in one of their unreleased betas. That’s probably why you don’t see it listed.

In the historic logs I see it as a resolved issue, we’ve not come across the issue during the current development effort.

For developers and testers, it might be good to add a “backup archive” feature to the BBM that saves a copy (to your local storage) of the data on the device/sd card before any operation that writes to it. Or perhaps this is on demand via the UI. Each backup would be in it’s own folder so you could go back to a specific version.

This would address a common concern of would be open source developers, how do I use an untested, unreleased version of the BBM (perhaps with my own mods) and not worry that I’m going to lose my precious setup and data?

No need to have any restore capability (we can do that manually if we know where to look for the folder). Nice to have some limit to the number of backups or a cleanup feature.

For the time being, is 1.65 still the “best” version to use? Any timeline goal set for a BETA release? (I know it’ll take time, I’m just anxious like everyone else.)

I don’t have a BB (just an Aeros) but this is a great initiative, as I see you’re using Qt, I’m eager to see if a native Linux port will come up soon ! I will obviously try to build but anyway won’t be able to test it.

But very cool ! You guys rock !

I succeeded in building and running BBManagerLean on Ubuntu 18.04. 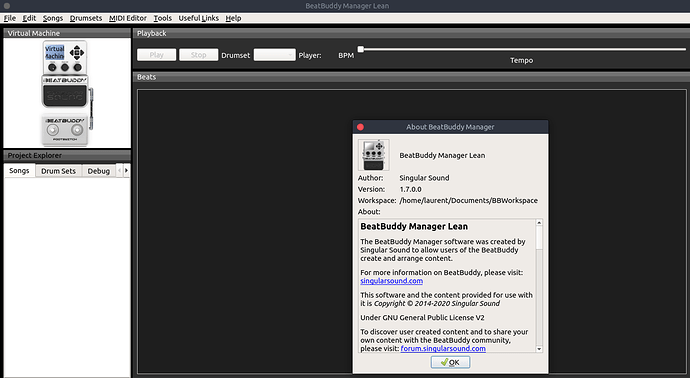 Unfortunately I do not have a BB, so I can not really go any further, but if anyone is interested I just had to install some dependencies, tweak just a little bit the build and patch only one file…

My C++ is clearly rusty

, but the sole fact that despite that I have been able to successfully build and run it shows that the code is well done and organized. Congrats

I would be very interested, it’d be great to put up the instructions on how to achieve this. Consider documenting the process and opening a PR

I was trying to set up to build on windows but getting errors in the standard library header files using MSVC. I’ll keep trying!

This is the Pull Request to add Ubuntu as build target.

Again I do not have a BB, so apart from running the application and opening few dialog boxes, I didn’t go any further… Spoiler I’m no C++ developer.

Please provide feedback on the usefulness.

This is super cool, I’m a new user an happy to get fast updates and fixes to issues. I noticed that there is not a “built” version of the software which for no-technical users might be a massive turn-off. Can I ask that when a new ‘master’ is added a corresponding installation package is created?
Also would it be worth updating “BeatBuddy Manager Software 1.64 (Win/Mac)” to give info of where to find the latest and greatest?

Welcome to Julissa as well!

I’m sure some good things will come of this all in time.

my requests for development priorities are:

I Would also like to have any settings, tempo BPM changes that i make on the beatbuddy to be saved on the SD card in the BB, in other words, when I’m playing and i speed up or slow down a song, have that change saved on the SD Card and the when i sync the card it will keep those settings.

Now i have to remember or write down any BPM Changes and go to the manager and install them and then sync the SD card again.

I don’t know if the beatbuddy can be made to do this, but it would be great if it could!!

Great news. How can we make proposal…