I’ve downloaded other beats that include bass, but I never hear the bass. My guess was that you need to actively use a computer & midi to access and use the bass? I don’t gig with a computer, so BB has to be independent. Am I correct about the Computer & Midi requirement, or am I missing something & the bass plays along with the BB beat?

Mod Standard Pro Bass drum set
Is there a starting tutorial How to make a song for the beatbuddy
persist February 13, 2021, 12:12pm #2

You need to use the

Hi Persist, thank you for the reply. To clarify, I use the BB Manager quite often, although I don’t yet create songs or modify structures, I just import them into BB to use them. The only things I’ve changed so far for any song is the Kit and the Tempo. I am not sure if you are advising that there is more required to do with BB Mgr?
So my deduction is that when I download a new beat that has a bass line, I MUST also download a User Created Kit made for that song, and then the Bass line will be played by the BB alone, without any computer?

So my deduction is that when I download a new beat that has a bass line, I MUST also download a User Created Kit made for that song, and then the Bass line will be played by the BB alone, without any computer?

Although I can’t speak for everybody that transcribes and posts songs, I try to customize OPB songs to fit the capabilities of the drum sets with bass and other instruments. I identify the kit I worked the song up for as the “suggested kit” to use. By using that suggested kit, it means you’ll get the sounds, tones and velocities that I intended.

You have to find, download, unzip, import and then activate the drum set using the BBM that the song calls for. If a user does not identify or suggest a kit that the song uses, you can always find that out by checking the Default Tempo: (see screen shot); if a user does not have that kit in the BBM, the name of the kit would appear in the Default Tempo: field as * SUB-Std Pro PL Bass 0-31

Screen Shot 2021-02-13 at 7.55.43 AM609×701 96.6 KB
There’s nothing that says you have to use those suggested kits and in fact, you can test the songs with various kits to find something that pleases you but as Tyraell in the post that follows this states, just make sure you’re using a kit in the same bass range as the song was transcribed with e.g., 0-31 (which is how I’m working up most of my songs today) or 63-91 (as that was the bass range in kits available in the earlier days of the BeatBuddy (BB).
Some suggested kits for the
Tyraell February 13, 2021, 12:55pm #5

You have to use a drumkit with included bass notes - BB will play the bass notes from that drumkit. No need of a computer, that’s the good thing. The standard kits do not contain bass notes! It is the best way to try the kits suggested by the user that created the song. But you can find a lot of other user created kits with bass. Bass notes are usually located at the midi values 63-91, but there are as well kits with bass from 0-31. So a song created for bass from 63 upwards won’t work with a kit with bass from 0-31. Just download some of the bass drum kits and you will check it out very quickly.

Thank you both, I will be experimenting and trying this out. Much appreciated!

A little bit about drumkit building, piano ranges vs. midi, and how and why I did things the way I did them.

I see it’s that time of year again when new users can’t figure out how to hear bass in their drumkits. I was once there, too. I read what I could on the Forum, which was then much smaller and, in my opinion, easier to navigate, and I learned I needed to use BB Manager, and that drumkits had to have bass built into them. It wasn’t long after that when I decided to take the plunge and build my own drumkits.

Understanding how to do this requires a little bit of background. Midi drumkits are generally constructed using a set of guidelines called the General Midi standard. You can see an illustration of this here: 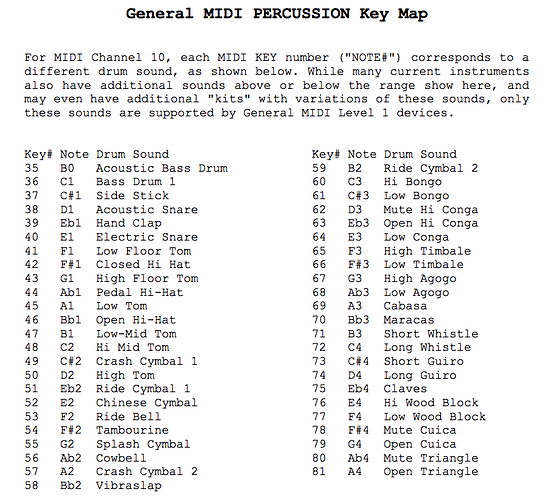 or displayed another way: 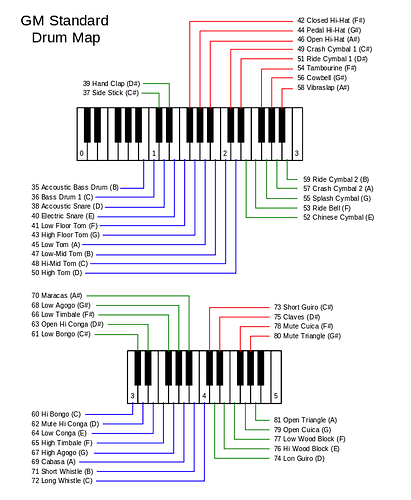 As you can see, the full set of General Midi drums is quite comprehensive, and ranges in values, or notes that are needed to trigger them, from B0 up though A4, or in strict midi numbers, from 35 to 81. Keep those number ranges in mind. We are going to get back to those relatively shortly.

A typical full-size piano has 88 keys, but Midi allows note assignments to 128 keys, numbered from 0 through 127. So Midi has 40 more note locations available than a full-size piano keyboard.

This has resulted in some confusion is how to label those extra notes. It all revolves around the definition and labeling of middle C, which is the C typically found near the middle of a full size piano. In some numbering systems, this is c1; in others it may be c3, etc. This results in different music production programs labeling the range available differently. Cubase, I am told, takes a fairly logical approach and labels the 128 midi values as C0 through G10. I work in Logic Pro X, which labels them as C -2 through G8. The reason I bring this up, is that in order to have an understanding of where we place things in a drumkit, we need to have a common language. Therefore, I use the raw midi numbers of 0 through 127.

This then brings us back to the values shown above for a drum kit, 35 through 81.

Now if you look at the drum kit, though, you see that beginning at 60, we start finding drums that are not necessarily found in rock and country, and we get things used more commonly in Latin music and in some jazz. Obviously, that is a generalization, but it can work to one’s advantage when building kits.

But even though there is a General Midi standard, midi doesn’t really care where we put something. Midi, in effect says here are 128 triggers. Assign whatever you want to them. Oh, and just to be generous, I, Midi, am going to give you 16 sets of these 128 triggers, so if you want to build a composition you have 16x128 or 2048 of these triggers available for your use. Use them wisely.

That number 16, refers to what are called midi channels. Many midi instruments can handle receiving and processing information or all 16 of those channels at once. Some can only handle one channel. Drum machines generally worked on midi channel 10, because, again, this was part of the agreed General Midi standard. At some point, this was loosened and drum machines were given the ability to work on all channels, but still only transmit information on one channel. Thus, they only had 128 triggers, not 2048.

That is how the BB works. It can use those 128 triggers on one channel. So, what, pray tell, does this mean for kit building? Well, it means you have 128 locations available to which you can assign sounds.

Part of my reason in building drumkits was to create accompaniments that I could use as a solo player. Obviously bass and drums were a priority. At first, I looked at the entire General Midi drum set, and decided I would try to include the full set in a kit. It was at this point that I learned that the BB could only handle 100mb of samples in its kit. My first kits had only 1 sample per drum. True, they did not sound as good as Goran’s realistic kits, but all the sounds were there, and it worked for me. What also became clear, was that I could then take existing midi songs, and use just the channel 10 drum track, and I had a full drum accompaniment ready to go. Awesome!

But, what about bass? Well, remember, I wanted that full set of drums, so when I saw that the then existing kits were using 63-91 as the range for bass, I questioned why? This took the place of several drums. There was a perfectly clear range of space available below the range of the midi drum kit, from 0 up to 34. And, a 4 string bass guitar, if played only within the lower 12 frets, only needed the space from 3 up through 31 to have the full range. I carefully made bass samples that could fit into the kit without exceeding the 100mb limit. Eventually, I decided to use the full 0 through 31 range to allow for notes down to a “dropped-C.”

But, I wanted more. As primarily a blues player, I decided a Hammond Organ would be great, oh, and I had the range from 82 through 127 available. Now remember, midi doesn’t care what I put there. I didn’t have to use an octave starting on C5, at 84. I could assign 84 to any octave I wanted if I made the samples. And, that folks, is what happened. My first organ kit had the organ placed from 84 though 127. This gave about 3 ½ octaves of range available for building accompaniments, and that was quite sufficient. I placed, for example, C2 on the 84 trigger, C3 on 96, etc. The challenge, really, was, and still is, the 100mb limit.

As time passed, I came to realize that I could delete or greatly cut the drums above 60, and open up space for more other instruments. I could then split the space from 60 to 127 into two instruments, piano and horns, for example. I had room to give just enough to have the flavor of those instruments for color. Thus, my STAX kits were born, because a) I stacked 4 instruments into 128 spaces, and b) I kinda dig the STAX sound from Memphis.

So, guitar, eventually got added too. And sometimes, it starts at 62, with a drop D, up to 100, high E at the 12th fret. Sometimes, the guitar is just in a kit for color, and I place it at 100 up through 127, if it is just there for chords, mostly. That would be the low E up through G at the 3rd fret high string.

I hope that give an idea of how things are the way they are. Just because I place something in a high midi range does not mean it is playing high notes. I treat those 128 locations simply as triggers, and I assign what I want to them. Whey did I keep the drums in the GM location? Well, this makes it easier to take an existing midi song and use its drums. Then, the bass part gets transposed down to fit into the 0 through 31 range, whatever other instruments I pick from the other 14 midi channels get moved into the range I set for their parts (realizing I can at most generally use only 2 of those instruments, and I have to edit them to fit my limited range), and I then merge those tracks into one track to become an arrangement that can work with the limited palette of sounds I have available in the BB, hopefully taking the best of the available 2048, and fitting it into 128.