I’m asking before I try it, because I’m new and I don’t want to screw up the work I’ve already done.
I never use the same set list twice. I at least switch the order of songs.
In BBM, is it really as easy as dragging and dropping up and down in the bottom left pane of the program and then saving it to your card?

Thank you! I have to say, this is a great group. I can’t wait till I get good enough at this to help new people.

In BBM, is it really as easy as dragging and dropping up and down in the bottom left pane

Moving songs up and down by clicking and holding them until they’re where you want them?

Correct. You can use the menu or keyboard shortcuts to move songs or folders. 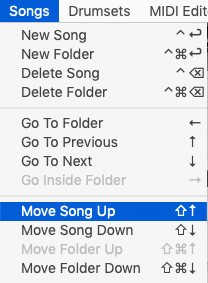 If you’re open to it, I think you’d be doing yourself a favor if you used a phone or iPad app to pull up songs during a performance, or anytime, for that matter. A big problem with BB Manager is that it takes forever to move songs around, the refresh thing is a killer, and the more songs you have in BBM and the fuller the folder, the worse it is. If your a person of average patience, you will be tested. It’s like watching grass grow, paint dry, pot come to boil…

I suggest using Onsong, Bandhelper, or a similar app and load all your songs into that, then create or order your set lists the way you like. Once you’ve done the initial work of adding songs to the app, the rest is fairly easy.

*Yes, if you’re just trying to rearrange songs already in a folder, you won’t run into the refresh issue. It’ll be quick. But heaven help you if you need to drag a few songs to other folders. Try it, you’ll see.

**Oh, and definitely learn the keyboard shortcuts. Those’ll save you time and clicks.

I suggest using Onsong, Bandhelper, or a similar app and load all your songs into that, then create or order your set lists the way you like. Once you’ve done the initial work of adding songs to the app, the rest is fairly easy.

I agree. Takes a little initial work but the pay off is well worth it.

Oh, and if you do decide to use an app to manage set lists, keep in mind that any new song folders you add to BB Manager need to go after your current group of folders. Otherwise, you’ll mess up your app’s song presets. If that doesn’t make sense at the moment, it will after you mess it up the first time.

This is a whole new world to me. I looked up Onsong, and to me it looks primarily like something you’d look at for chord charts and lyrics, and then it may do some other things. Am I right? If so, it’s definitely not for me.
Honestly, I’d be perfectly happy just moving my songs around and saving it to the SD card every time. It’ll suck a little when I get requests, but I’m sure I’ll cope with that as I get used to this thing.
I did my first gig with the pedal last night, and the experience was phenomenal. I have the right button of the footswitch set to go to the next song, and it’s beautiful.
But again, I’m very new to this, so if there are clear benefits to using an app, please feel free to mention them. I need all the education I can get.
Thank you to everyone who is giving their two cents, it’s awesome.

**You say that, but I really think you’re going to reach a point where you’ll grow impatient with how much time BB Manager takes to do simple thing like move a song from one folder to another, especially when you need to move more than a few songs. If you have time between songs to muck about looking for that request and it doesn’t hinder your performance, that’s cool. Or, when you’re looking for that request, you could be working from an alphabetized master list of songs in an app, a master list from which you’d pull songs to create set lists which you can save and recall for when you’re playing specific places. Create and save as many different set lists as you like. So, a little bit more about apps…

Onsong and Bandhelper are apps for stage, a place to put your songs w/ lyrics, chords, and any relevant notes. BUT, the thing you might have missed is that these apps can send Program Change data, MIDI data, sysex (hex data - Bandhelper can do this. Not sure about Onsong, maybe?). So this means you can call up a song from your app, have the chords and/or lyrics appear on screen - and those chords and lyrics can be set to auto-scroll at a rate that coincides with the length of the song -AND, the apps can make BB jump to the correct song w/ tempo, drum set (say you wanted to use a brush kit instead of the Rock kit), and other things you might wish to specify, such as skip intro. AND, those apps can send midi data to your effects pedals, keyboards, or anything else, including lighting, that can be set via midi. All with a single screen press.

**To be clear, I’m approaching this from the point of view of a keyboardist. I have keyboard and effects unit settings to change between songs , so it makes sense for me to have an app do this all in one shot. You may find you don’t need anything more that your BB pedal and a guitar, and if that’s the case, that’s awesome.

I agree about using an iPad or iPhone. I play regular live gigs, and I use an app called “Setlist Maker”. I can quickly create a custom setlist for any gig, and all I need to do is tap the song I want on my iPad, and the song automatically gets pulled up on my BeatBuddy (as well as my synth patches on another device) via MIDI. I can’t imagine having to bend over after every song to operate the BeatBuddy by hand.

Set List Maker is good; a lot of people use it. Bandhelper, created by the same developer, Arlo, is the next iteration of SLM. You can work from its online website, which means you can sit at your laptop or computer with a full size keyboard and mouse and get some work done on a large screen. Everything done on the website synchronizes with the app on your devices. From my experience, Arlo is very responsive to questions. And the slm / bandhelper forums have a good bit of content about working with beatbuddy.

Excellent, I will check that out.

Man, that’s a lot to think about, and I definitely will if things ever slow down for me lol. I needed to get this up and running to within a matter of 2 says, so I just wanted quick and simple. The request thing is a very good point. I had a few requests this past weekend, and luckily I was already on a pattern that worked. In fact, 2 of the requests were literally the next songs to play on the setlist! But that almost never happens, so it definitely would be nice to use my tablet. I’m guessing I can use an Android…I don’t do Apple lol

Right up front, Onsong does not have an Android app. SLM and Bandhelper have both iOS and android apps. And while I’m at the full disclosure thing, it will take you some time to set up whatever app you use to control beatbuddy and any other midi connected devices in your setup. But you can certainly start by adding the songs that you most commonly play, and then put together a setlist from those. And if you are clever enough, and truthfully it’s a little tricky, there are ways to do a bulk import of songs so that you’re not doing this one song at a time. And I should be clear about that, what you’ll be doing is entering songs into your app. From there you’d have to edit each song to get everything working together. You know what, I should stop there because I really need to investigate this further. But I will say it’s my understanding that you can do a bulk upload using a template, which’ll save yourself a good bit of time in setting things up. And in the long run, things will be easier to organize and maintain using an app.

In fairness to BB Manager devs, I don’t know that creating a one-off app like this is something easily done - one-off in the sense that BB Manager is an application created specifically to support a single piece of hardware, BeatBuddy.

Everything will be time consuming for me. I’m a piano player in my late 40s who never took the time to learn midi. Whichever was I go it’s gonna be time consuming! What I’d really like is to find out that I could get my beatbuddy to completely work via midi with my Korg Grandstage piano. I need to research that. It wouldn’t help much with setlists, but maybe it would save my footswitch buttons a little.

You probably could get your piano to control BeatBuddy, but what are you hoping to accomplish? What are you trying to do?

My act is strictly my piano and drums. It would be cool to be able to control everything from the piano… Change songs, edit tempo, start/stop, fills and ending. Not sure I’ll be able to do all that, but it would be nice.