I’m new to the forum. I have been using the BB for several years now, purchasing it almost immediately upon its initial release and it is absolutely superb for my use at gigs. But (there is always a “but,” isn’t there?) this week, for the first time, I started using it outdoors for street performing as opposed to indoor use. I found that the display is not visible outside. For every song I had to kneel down and shade the display with my hand in order to see the display. So I could neither read the song title or see the visual metronome which I use extensively.

Is there any way to brighten the display so as to be visible under outdoor/bright sun light conditions? Perhaps reversing the colors/black background would also work?

I’m probably just missing it but I haven’t found any way to do that - Not saying it isn’t in the manual but I’ve read it through several times and I can’t find a section that mentions adjusting the display.
As I said, been using the BB for years and loving it but never used it outside until yesterday!

I don’t have mine in front of me, but it’s on the pedal itself, somewhere in the Setup (press the middle and right knob). If you don’t find it by the time I get to my BB, I’ll see if I can find it for you.

I’ve been in the setup menu 4-5 times today trying to find it and then went to the user manual. The only thing I can find in the menu or manual re the display just allows me adjust the font size and change the settings in the visual metronome but haven’t found anything yet to actually modify the display color or contrast.

Maybe I’m wrong, then. I’ll have a look. And maybe @BeatBuddy_Support can weigh in?

I take it all back, Mike, I can’t find the contrast setting anywhere. Obviously, my wife is right, memory is the second thing to go (I don’t remember what the first one was…)

Mike, Can you get the BB up off the floor and use foot switches for control? I had built a stand out of an old camera tripod purchased at a thrift shop. The table top can tilt so the display screen is towards you and it would be fairly easy to construct a small shroud to shade the pedal from the sun. The top on this is large enough to fit my TC Helicon VLP GTX and the BB pedal (I use 1/4" right angle plugs on the BB to keep things more compact on the sides). The legs on the tripod can be extended to give better stability. Nice having both within arms reach. 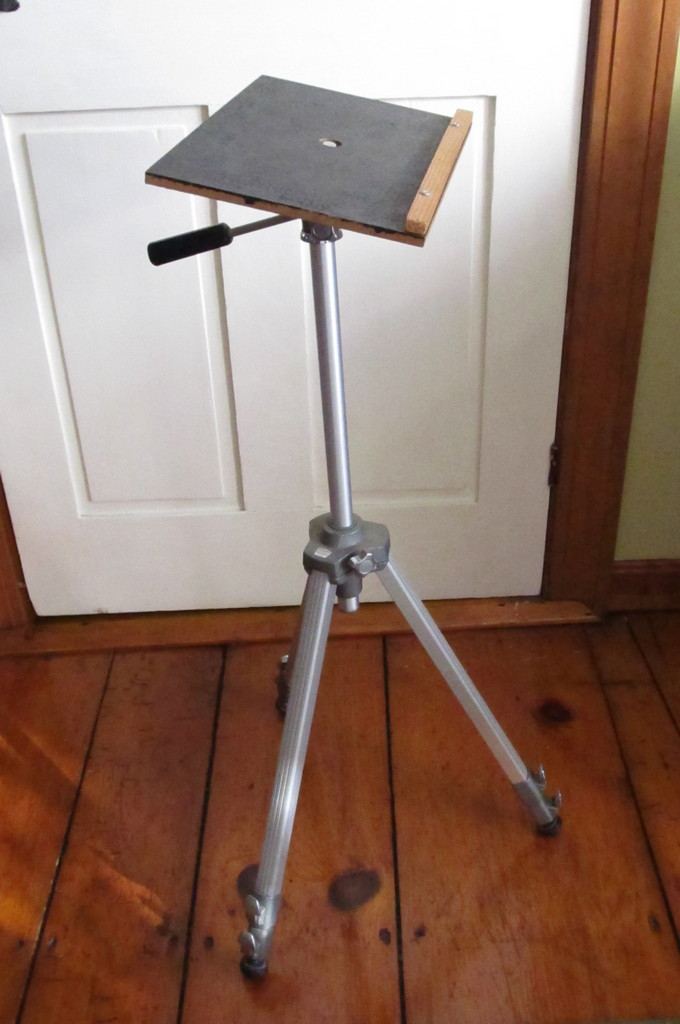 The BeatBuddy display cannot be brightened further than it is.

Can you adjust the contrast?

Mark, I could use a stand as you do but I am used to how I work (guitar/vocals) with the beat buddy on a board on the floor with the BB foot switch next to it and a TC Helicon harmonizer next to that . I use the BB main switch to activate the song/fills and the BB foot switch 1 to move forward, switch 2 to move backward to select songs when stopped. When playing I use sw 1 to hit an accent and sw 2 to end (outro) a song. It really works well for me that way and I don’t want to set it up differently.

Again today I busked outdoors and, again, I couldn’t see the display at all, having to kneel down to select a song. I’ll be doing this (busking outdoors) for the next few months. Kneeling down is not convenient and doesn’t look good from an observer point of view.

I have a lot of songs on the BB and I don’t necessarily do them in a particular order so being able to quickly step forward and backward to find a song is important. But not being able to read the display without kneeling down makes it impossible to do so elegantly!

Again, this is ONLY a problem outdoors. I think the display might be visible on an overcast day but it’s not in the sun. The TC Helicon display isn’t great under the same conditions but it IS visible and usable without the kneel-down! Hope the singular sound tech guys/gals can work up some display options to overcome this!

Joel, I also have the same problem remembering what that first thing was!

FWIW - was out today under cloudy skies - still not workable display-wise.

Wonder if it’s possible to “remote” the display to an iPhone? I don’t see any obvious way to do that but that would work since I could set up the iPhone to be visible one way or another.

Instead of trying to find a tech solution, have you considered or tried using a cell phone sunlight screen filter? Maybe something like this? https://www.geek.com/apple/iphone-6-polarizer-finally-lets-you-view-your-phone-in-the-sun-1604967/

No, I hadn’t thought of that. I have no experience with such screens, never used/needed such a screen with my iPhone outdoors - maybe because it’s easy to just angle the screen as necessary so as to be readable, which is not possible with the BB in the “playing position.”

Have to admit I’m surprised this hasn’t come up as a common issue years ago - surely I’m not the first person to use a BB outside!

I’ll see if a screen filter fixes the problem, thanks!

Hi MexicoMike. Unfortunately I’m not here to answer you question, rather to ask another. How is it that you power all your pedals if you are busking? I didn’t think the BB was battery powered.

Can you power a big buddy with a 9 V battery adapter? Technical Support

Thanks, Persist. I’ve tried a couple of different adapter cables. The most recent were from KUNCAN: They also make step up cables for 9, 15 and 18 volts. If you look around, you may find a single cable that will step up to different values. This is the phone powerbank: Mind you, I picked those two items because they were cheap. I doubt I will ever put myself in a position to truly need to rely on them and you may want to look around for more mainstream batteries such as the Ankers, wh…

I have also used a larger version, 7AH, but found I didn’t really need it. The 4.5 will run the two components for several hours. I use a 9v converter that is about the size of a matchbook to drop the 12 to 9v for the BB. The Harmonizer uses 12v. This is the converter: https://www.amazon.com/Magnolian-Efficiency-Converter-Supply-Waterproof/dp/B00A71E52G/ref=sr_1_3?keywords=12v+to+9v+converter&qid=1563087178&s=gateway&sr=8-3

I mounted the batt, converter, BB, BB pedal, and the harmonizer on a piece of 3/4" plywood approximately 10" by 18". I painted the board flat black before mounting the wires/components. I attached a standard battery connector so that the battery can be charged with a wall-wart charger while in place. When practicing at home I keep it plugged in so it is always fully charged. I have had the same battery in the unit for several years so I’m quite happy with battery life.

Re display brightness - got a nice email from Jay expressing interest in looking into the issue with a possible change to display brightness and/or remoting the display. He did not promise that any changes will/could be made but I was impressed with the willingness to examine the possibilities!

Thank you so much MexicoMike! I certainly hope that the techs can help with the glare issue. A careful placed umbrella could help shield the sun in the meantime