Please, confirm that you tried updating the Default Modes (and saw the light stop blinking, then resume blinking at the end).

I confirm that I’ve tried updating default modes, the light stopped blinking, then BLE connected appeared on the display. Soon the text was replaced by EEPROM invalid with no lights blinking again.

If it helps, I can make a video

Same problem for me.

I tried updating my maestro. I’m getting the eeprom invalid message.

Probably because I tried to update the default mode first.

NoW I connect to Bluetooth and irrespective whether I try to update firmware or default mode Maestro is terminating the Bluetooth connection and giving me the eeprom error message.

Well just got into the betas , updating the firmware … eeprom stuff coming … midi maestro out of order … sorry to say but looks like a joke … there should be a turn on button push to reset to factory … gig on Friday I m so happy …

I’ll make time this week to work things through with every one of you one way or the other. This will be a good time to exercise our support setup

A week has passed already. Any news? I’m not in a hurry to reconvert my beautiful door stopper, after all I’ve waited patiently for almost 2 years now.

Thanks for the new firmware , it works could get back to factory base setup

Be aware that sending custom button gets you back the eeprom invalid.
Cheers

Hey did you update the default modes first? Always do firmware > Default Modes> custom mode in that order, we will eventually streamline this process in a later version, for now it is best to do so. Let me know if you still have this issue after doing so, thank you.

Having the same problem here.

Are you using the Android or iOS version? 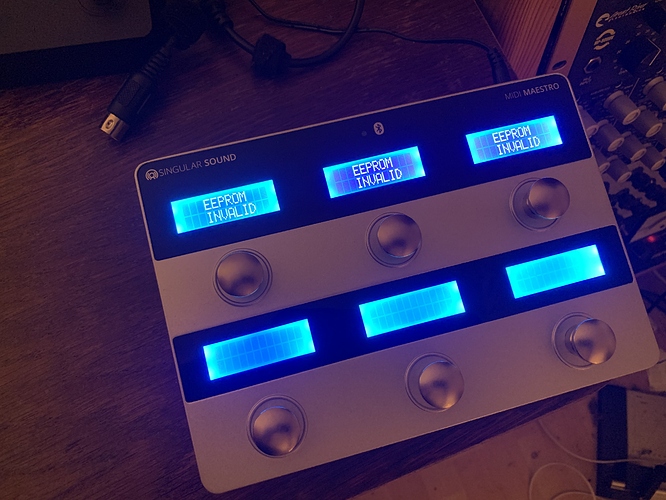 Did you do it in order, firmware> default modes> custom mode? If so make sure you are letting the FW update finish, it is a known bug that if your phone closes mid update it will stop the firmware upload.

Also please check on your testflight app that you have the latest version of the alpha app.

Glad to read that you got it working. For other iOS users running into the same issue, here’s a little more detail and what to do if the first step fails.

I was able to restore the app and complete the update. Here’s how I suggest you try to restore your MIDI Maestro. This is the first step and it follows what Brennan mentions but with a little more detail:

So what to do if the EEPROM INVALID is still showing? This second step is a little more complicated but you should still be able to recover your pedal.

I then pretty much followed the same general process as above:

Update app and firmware to the latest version from 1.0.7a

This was a life saver. I was freaking out a little bit. All good now. Thank you for the clear instructions @persist!

How about if all you get is “Reached Timeout For Scan” no matter what you do? (in Android as I STILL have not go the beta link for Testflight - and I have asked!)

Hey, I invited you a bit earlier. Check your e-mail.

It’s weird that you’re getting “Reached Timeout for Scan” no matter what you do. Please test with your iOS device and let us know how it goes. I am looking at this – if you reply to me I will also get an email.

Cooly, thanks - got the message. About to launch into the Testflight version soon

Stuck on Eprom Invalid - followed the procedure above and still eprom invalid. I don’t have a link to any previous versions, so at this stage my MM is bricked!

Tried an experiment and turned on the MM while holding down both bluetooth and mode buttons…got the display back, it shows version 1.1.5 (which I assume is latest?) do we might be good to go again…