How do you duplicate an existing drumset without re-creating it from scratch?

I noticed there is no “duplicate drumset” freature in beatbuddy manager.
This is a bummer.

Does anyone have a workaround that saves me from re-creating a new ds every time?

thank you for your help
Andy

Phil- Thanks for the input. Another question if you can help - is there a way to copy an existing drum set, change the midi mapping of a few notes, and rename it, so the original drum set is still intact? Or… where are the individual samples filed so I can create a custom drum set? I’m on a Mac… Thanks

So basically you are confirming that a normal duplication feature (something every other software on mac can do) is not implemented and this has not changed since 2018???

If I see this right then you do not only have to take the tedious task of re-building eniterly new drumsets but you also first have to search and find the samples???

Thats a bit poor isn´t it?

What is Singular sounds stand on this?
Do they consider this user-friendly?

This is nothing other than a workaround. I’m neither confirming nor denying anything

Several users have rolled up their sleeves and figured out how to get around the BeatBuddy Manager (BBM) shortcomings in the Drum Set Maker and they’ve gone to the trouble of providing their tips and techniques on how they do it to the forum.

Mac and PC users have been providing feedback to SS for several years now on how to improve the software and the pedal’s functionality and now you’ve joined a long list of users that have been asking for those enhancements.

What is SS going to do about it? As David Packouz has mentioned in other threads, they don’t have the depth in developer numbers and talent to work on more than one project at a time and at present, that happens to be the AEROS. Whenever they’re done getting the looper up to speed, they’ll turn their attention to the MAESTRO and when that’s done, they’ll turn their attention to fixing the many bugs in the BBM and then to working on the functionality that users have been asking for. I’m guesstimating that they will also have to concurrently deal with the integration of all of their devices so that they work seamlessly.

It unfortunately is what it is. Welcome to the queue.

There is a good solution: its called GNU open source license.
They can just give it to the community and provide documentation.
I am fairly sure we have a proper interface next week.

But you cannot on one end insist on propriatarian stuff (which is ridiculous considering we are talking about simple MIDI) and on the other site fail to develop AND still wanting to sell this.

I am generally disappointed.
The device (hardware) and firmware is good. I like the concept but I am also a Musician.
This means I got it for playing music. If editing simple midi stuff and drums takes me a lifetime my musical heart is frustrated and burned out.

There is no point in selling instruments that do not play.

Open source has been recommended several times as well. There are several users that like the BeatBuddy Manager (BBM) software so much that they’d probably rather use that in place of the pedal and I’m only opinionating (wind-bagging) that once that happens, SS loses their proprietary edge.

The system seems to work just well enough to satisfy the majority of users that don’t want to dive into tweaking.

For the sake of it: here is how you duplicate an original drumset

Export drumset to hdd (i.e. standard.drm)
rename export (i.e. to lpstandard.drm)
copy to user_lib/drum_sets in BBWorkspace
Use BBmanager/BBdrummanager over Menu Drumsets/open drumset and open renamed drumset > nothing happens
Close BB manager entirely
Re-open BB-Manager
You will find the original Drumset (i.e Standard) and a second version with (1) (i.e. Standard(1). Both show as not downloaded. also you find a third not even opened one.
Delete 3rd instance
rename XXXX(1) - version of drumset
Reopen BBManager once more : Start editing your copy as you wish.

I know it is tedious having to trick a database but it is faster than editing an entire drumset.

(p.s. if anyone feels like scripting this then Singularsound can keep their head in the sand until they don´t sell anymore)

How do you duplicate an existing drumset without re-creating it from scratch?

It looks like the trick is to open the drumset you want to clone, then click the name to change it 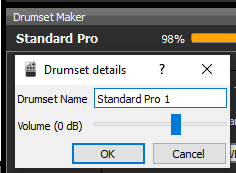 Then Save Drumset As 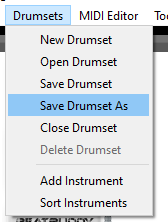 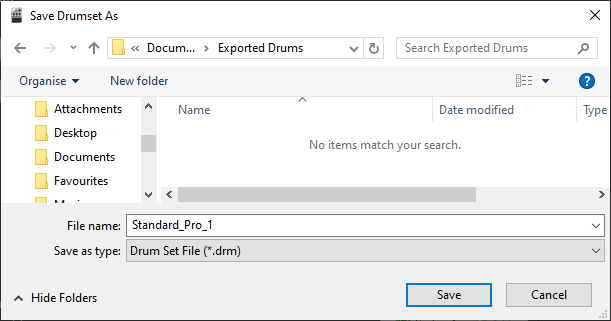 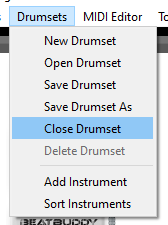 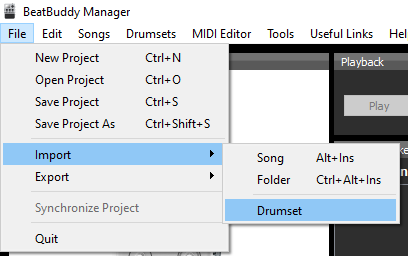 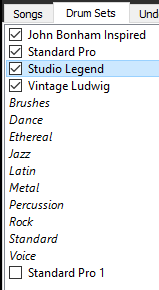 Of course, makes sense considering all basic logic of this software.
It does not recognize it as existing when it was removed from the database.

Smart, thank you.
Mine worked too but this is easier for sure.