I recently downloaded the V2 standard library and followed the instructions to clear out the folders and unzip the V2 library and get all that working in BBM. However the instructions about bringing the premium content seem to focus on importing one or two songs/drumkits that you bought off of the premium library site. It does not seem to address if you bought the complete premium library off of the main singular sound website and have more than a thousand files and additional folders that are extracted when you unzip the complete premium library zip file.

How do you get the v2 standard library and complete premium library together in one project?

Good question!!! It would be a great help if Singular just provided individual FOLDERS and DRUMKITS for the updated content, rather than requiring ME to export 100+ folders and drumkits and then re-Import them. Frankly, Singular’s thoughts about how these updates impact customers SUCK!!! I should not need to reimport EVERYTHING I have created to Import the few stock folders that you FINALLY chose to update.

Couldn’t agree more! What I don’t understand is, at least for “version 1”, if you purchased content individually, you got a folders of all the midi and the PBF file to import. I just purchased the entire library, fully expecting PBF’s and Midi. What a surprise to receive just the SD formatted content. I’m also guessing, although I do have the question into Singular, that the July 2019 Premium SD “card” does not contain the August v2.0 changes. So we need to first install the Premium Library, then install/merge the 2.0 library. Tricky part might be the drum kits… John

My intention is to create a separate SD card with the new drumkits and folders in the August v.2 update. Then, export those folders and drumkits to a new V2 update folder on the hardrive. After I do that, I can restart BB Manager with the old SD card, and I can choose which pieces of the updated content I wish to import. That would involve using the Delete Drumset command in the BB Manager Drumsets menu bar. Then use the typical Import Drumset to get it into the project. As far as the song content goes, I think I’d prefer to keep the old stuff and get the new update stuff, so I may just change the names of the original folder to things like Rock OLD, Blues OLD, etc. The Latin kit would need to have its name changed in Drumset Maker in order to save it, and then export it with the saved name to the new folder location. Delete, the re-import with the New name. But, it would be much simpler if we just had the individual pieces provided to us rather than a mass dump in a replacement project.

That makes a lot of sense. BTW, Singular did get back to me and indicated that the 2019 Premium Content does contain all the August V2 updates. I’m guessing you’ve already found out about the tempo problem with the new content and BBM. Singular created loops/fills/transitions with fixed tempo, it’s a mess using BBM. No issues so far with the BB itself.

What I did, in concept, is nearly exactly what you describe, but included my need to control my Beatbuddy via Onsong and Reaper using Midi ( I gig with a laptop and jam with just the pedal). In essense, Onsong always selects the folder/song via Program Changes. I rename/export/import all the beatbuddy content, folders, songs, and drumkits, to start with a sequential number that never changes and corresponds to Midi Program Change or Control Change format. That way I control the order of BB content. I can look at any Onsong Midi and easily find the referenced folder/song and I can modify or create Onsong Program Change Midi to point to a new song by referring to the BBM or the Beatbuddy itself. It’s a lot work to setup but worth it in the long run. I replaced the old drumkits with the new ones and will use them in my working projects. I’ll use the Singular song content as a “master library” and copy, as needed, to my personalized folders/songs. At the end of the day, my Onsong project contains all new drumkits, my current Onsong folders/songs, and all the new content.

If you’re interested, I can document my process. Always appreciate everything you do help everyone and improve the BB experience. Thanks John 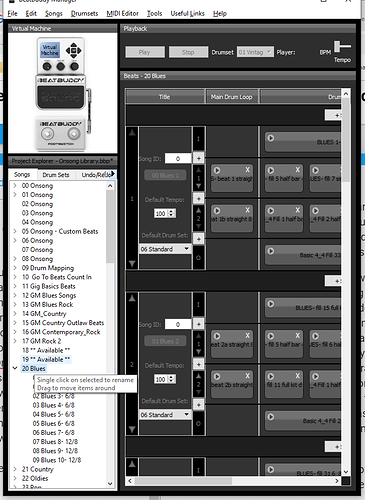 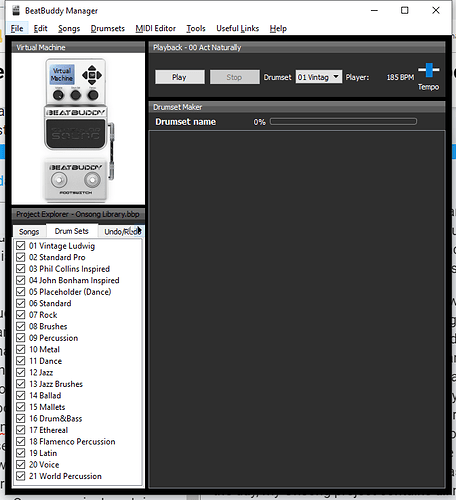 Thanks, John. I use OnSong, too, but I only have my first couple of folders loaded with my OnSong content, so I just never change the order of those folders. As I get new folders ready for OnSong, I add them to the next available location that has not already been made OnSong ready.

How do you get the v2 standard library and complete premium library together in one project?

Hope I’m not misunderstanding what you’re asking but as I re-read Goran’s instructions, he stated “If you purchased the Complete Collection, you can re-download the entire package that contains all changes to default content, updated drumsets, and Premium content.”

I believe Persist is correct, after having played with this stuff this morning. I read through the “complete list of changes” document. There are no changes to Premium Content. All of the changes are to the default drumkits and default songs. If you want keep any of the older stuff, you have to jump through some hoops. The new Latin kit is entirely different from the old one. The new Jazz songs are different.

Given the size of my project folder, I found that easiest thing to was to load the new project on an SD card, and then export the song folders with the changes. On my existing project, I changed the names of the old kits to “kit name OLD.” With regard to old content I wanted to keep, I changed the folder names to “folder name original.” I then imported the drum kits from the individual kit downloads. Then I imported the new song folders into my existing project.

After doing this, I can see that at least for the drum kits, an easy installation route was available. But for the updated song content, the only route provided required building a new project on a new SD card. If the new song content had been provided via individual folder links, just as the new drum kits were, there would have been no need to create a new project SD.

Thanks for all the research you guys did!

I think where I went wrong was that when I actually went to do this update, I went straight the web page about the update and followed those steps instead of re-reading the original email.

My guess is that I will now follow the email and clear out one of my SD cards, copy the July 2019 complete premium folders to the card, open BBM and open the card as the project (or what ever you do to get the library into a BBM project), then re-import my own songs back onto the project.

Hello everyone.
Watch out for the drastic changes made to the Latin Drumset. I found out when none of the songs I created using this set sounded right. Instrument’s were shuffled around and some were excluded -I think, need to confirm. The Singular Sound support group responded promptly to my email, informing me that the changes were documented here: https://mybeatbuddy.s3.amazonaws.com/default+drumsets+updates/default_drumsets_update2.0/Latin+Pecussion+Set+Drum+Mapping+old%2Bnew.pdf
I now have to either redo all my songs remapping the instruments or import the previous Latin drumset under a different name and associate all my songs to this new set. I’m not happy, trust me, but I’m glad I have a work around.

I do value and very much appreciate all the hard work Singular Sound puts into improving their products, but I think they need to really think things through before upsetting their customers hard-worked BB environment with each update.
Cheers!

Or, you could reinstall the old Latin drumkit. I saw this problem coming. I’ll post the old kit as soon as I am at my computer, and give you the link.

That’s what they suggested and that’s what I seem to have failed to convey, Phil

The secondary reason behind bringing the previous Latin drumset under a different name into the latest, improved update is to also have access to the new, improved Latin sounds for future songs.
And thank you for offering! I do have the previous kit.
Cheers!

Glad you saved it!

Or, you could reinstall the old Latin drumkit. I saw this problem coming. I’ll post the old kit as soon as I am at my computer, and give you the link.

Maybe only my own opinion, but Singular should have all the previous versions of drum kits, beats, and firmware available on their site and easily found. Not everyone will like the newer, supposedly improved versions of what is available and may like to revert back to something previous.

I am very disappointed with setting up this new version. The instructions suck! Having to do all those moves is really frustrating. My time is valuable and I don’t need to spend time playing programmer for BB. For the money spent they need to come up with an easier solution. I finally put everything back the way it is and work with the older version. I would not recommend this to my friends for purchase. I’d gladly pay for another SD card, send mine back and let SS do the upgrade. That’s the least they can do. Thankfully I’ve saved my originals on an external drive and on another SD card. Shame on them for their so-called upgrade. Just from what I’ve read and experienced. Sorry SS. Thumbs down for the changes to be made on this upgrade!!

I am soooo confused! Since I like some of the old content, I want to save all the old content on my original card (including custom songs I’ve made AND custom set lists), and then somehow merge the new and the old (I bought the full 2019 card which came with the newest firmware).

I used BB Manager to save the project (does “project” mean songs+drum sets?) to my desktop before bringing in the new card. But I got confused when it asked if I wanted to synchronize? (I don’t know! Do I want to synchronize to a backup on my desktop when I plan to add those items to my new card?)

I sort of see what Phil_Flood was doing… But I get confused, distracted, and then I freeze in fear of messing something up! I’m almost considering setting up a separate computer for managing the new BB content and just switching out SD cards when I want to use new vs old content. But that is putzy to do at a live show with the time it takes the BB to read the cards and start to function again.

Is it just me?—I did not understand Goran’s original instructions at all.

I would appreciate some “instructions for dummies” if possible— mainly to save my original custom stuff to combine into the new card. Thank you for reading! Any help would be GREATLY APPRECIATED!

As long as you have backed up your project with your custom songs and it’s in your bbworkspace, you should be okay because you will have a backup to recover if anything goes wrong.