I had an issue with Jazz Brs Straight 1, that when you do a fill, it appears to step back a half beat or so causing everything to get out of sync. I noticed it because I was recording and when I do a fill, the first beat on the BB isn’t in sync with my DAW. This happened for Part 1 and Part 2 fills, the transitions seemed ok. I’ve used this beat a bunch of times for recording and with ninjam, and this didn’t use to happen, however, it may be related to the 3.9.3 firmware update as I did that recently.

To fix it, I exported the midi for the fills out of BBM and reimported them into the song. This seems to fix it. I don’t know if anybody has the issue as well, but I wanted to put this up incase you do, and how you can fix it if it happens.

I’ve found another song with the issue. Funk 1 - Str 16. Only the 2nd fill causes the issue. Name is FUNK- Fill 71- straight 16ths snare+kick sync+.mid
I noticed that there appears to be something odd with the Fill midi, so I got the latest from the 2021 downloads and its has the same problem.
When opened in the BBM midi editor, it asks to quantize and it looks like this: 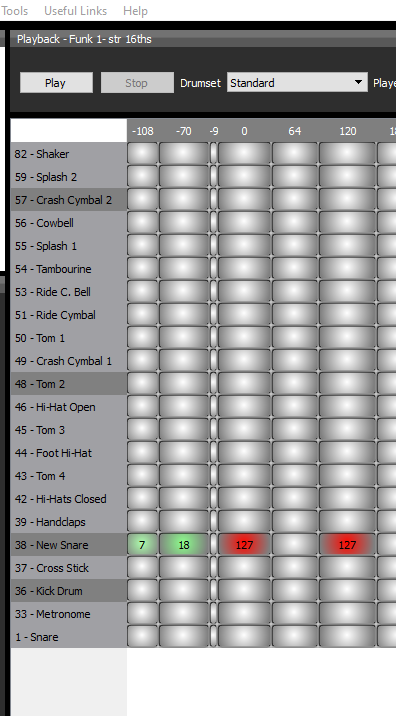 But when I quantize and export out, then bring back in again, it looks like this:

The imported fill plays correctly without and issue. Notice the minus numbers in the front. Maybe the issue?
I hunted around BBM a bit and I found that another song, Funk 2-str 16, has 1 midi fill with the minus number. FUNK- Fill 116- straight 16ths sync snare + kick.mid and I confirmed if I use that fill, it goes out of sync. So definingly something with the minus thing in the front of the file. All the fills I’ve tried that don’t have the minus, are fine so far.

To repro the issue:

I leave the metronome running so I can hear and watch it go out sync.

Does anybody have this issue? Would anybody mind trying this out to see if its just a “me” problem?
I have the latest firmware update and I’m 100% sure this didn’t use to happen before, so maybe an issue with the firmware?

Hey there, thank you for reporting, I am forwarding to Dev!

Stay tuned on this, you’ve confirmed this is only an issue on 3.9.3?

I went ahead and rolled back to 3.8.0 and it doesn’t appear to have the issue.