I’m new to all of this so I apologize for my naivete!
I’m looking at some of the songs in the user forum uploaded by so many great contributors, but many of these songs require a drumkit I cannot find in the store, nor in the Drumkits resources. These include:

Also, I see there are mid or MIDI files in some of the songs I’ve downloaded, others don’t have them. What do I do with these? I’m surely missing something here. I’ve been able to import drumkits and songs, but have. no idea what these midi files are for and how I am supposed to use them.

These kits you mention are not available on the forum because they are based on the premium kits sold by Singular Sound. With the exception of the Vintage Ludwig kit, Phil_Flood has provided good substitutes for the Standard Pro and NP Standard Pro Bass kits. The kits are loosely named SUB Standard Pro Bass 62-91 (they include PL or SWN in the names). Also check out NP StandardPBass 63-91.

Thanks, Persist. I’ll check those out. I"m happy to buy the kits but couldn’t find the specific kits titled in this post. I’ll look at those you recommend.

On my other question, as for the midi files, I’ve searched everywhere and cannot find a tutorial or info on what these are used for and how do they supplement the .sng files?

The MIDI files are the components of a BeatBuddy (BB) song. For example, the Intro, Main Drum Loop, Drum Fill, Transition Fill and Outro may each contain a .mid file. The Accent Hit is based on a .wav file.

Okay. So they should be imported, I assume, with the song. Except when I import a song those elements are grayed out. 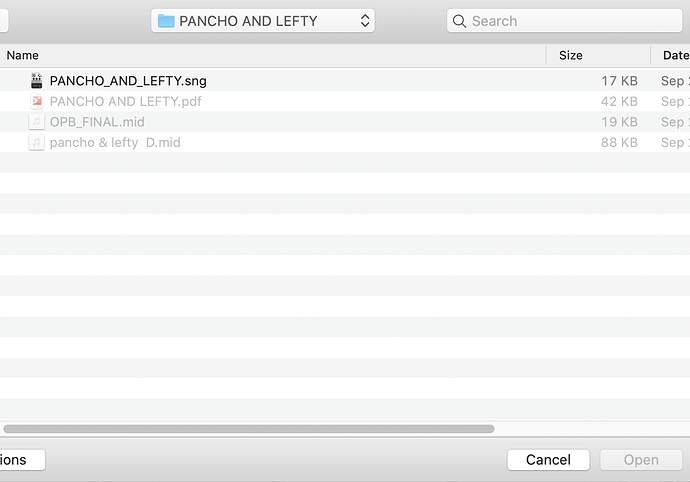 Though when I click I can open them in Logic Pro X, and can play them w/default mapping.

Keep in mind I’m a novice, I use LPX to record audio for podcasts and video editing, barely touch anything midi.

Should I assume that BB can somehow play the MIDI ‘sounds’ outside of Logic? Do the Drumkits somehow contain other instruments that the mid commands would trigger? Is there a tutorial about these OPB files and how to get up to speed to use them? Thanks!

You don’t need to do anything with the .mid files. They are an extra item provided for those who are capable of editing them (in a DAW, like Logic) should they find something in the .sng to be not to their liking. In this case, it looks like one of the mid files may be a version of the song in a different key.

I’m in the same boat. New bb customer. I’ve downloaded lots of user generated content and they play within beat buddy manager but won’t play on the beat buddy. Elvis Costello Allison is one of them. Do I have to locate a drum kit np bass or something or turn on something? I can’t seem to get anything with additional instruments to work. Mike m

Yes, you need the correct drumkit, or a replacement for that kit. What does the song call for? Have you searched the Resources>Drumkits section.

This is sort of the problem I’m running into with a lot of zip files of songs I’ve downloaded. The originating post may have stated it needs a certain drumkit, but then when I get around to opening it a week or so later to play with there’s nothing in the zip file package to indicate the correct associated drumkit such as a simple text file. In retrospect I probably should have noted the drumkit used when I downloaded songs and made my own text file to stuff into the zip which I’ll likely do in the future.

Thanks for reworking this one Phil… Nicely done…

Within the zip there’s nothing to reference the drumkit when I open it much later. You guys do a lot to contribute content to this site and it is much appreciated. I just wish I had had the foresight to note the drumkits needed in songs when I downloaded bunches of them.

Thanks for reworking this one Phil… Nicely done… beers

Yup. You should just grab the drumkit when you download the song. It makes life easier that way. Or, when you do load the song, the kit you need should appear as the default kit for the song, with an asterisk in front of it. Then you can try to search for it. FWIW, in my newer song postings, I have starting providing a link to the kit in the listing. I can’t include the kit with the song, because then the file is too large for Singular’s system.

I’ve always been careful not to share purchased (kits not included with BB) in the forum. We all use to police ourselves on that. I guess I’ve been away for awhile…has there been a effort to remove modified premium kits? I can’t remember what my custom kits contain as far as purchased componants. I’ll have to be careful.

Hey Jim, we still police ourselves on that. It applies to kits made from Singular’s premium kits. If I make samples from some VST I bought somewhere along the line, I figure those are my own creations, just as they would be if I recorded a Ludwig drum.

If someone needs to Standard Pro with Bass kit, or the Vintage Ludwig with Bass, I ask them so provide some kind of evidence of purchase before giving them the link.

I recall sending receipts to get kits. Never minded it. I almost exclusively use the brushes kit. Is there a substantial upgrade as far as quality of sound in a new brush kit? I’ve fallen off the grid lately.

I haven’t really used the new kits much. Most of my kits are ones I made.