I’m looking for advice/experience in using the BB with a midi pedalboard.
I’m looking at purchasing either the Behringer FCB1010, AirTurn bt200-6 or meloaudio midi commander.
All these suit my budget.

I’ll be using it in conjunction with OnSong and my voicelive3 to send CC commands with (hopefully) latched and momentary switches simultaneously. Anyway…

I know the commander doesn’t support variable CC for transition moving on but does the FCB1010 or AirTurn?
The existing BB footswitch and VL3 pedal are currently setup under my piano and I’m bored in constantly moving them to play guitar, hence a second board. Which can be a bigger footprint if needed.

The AirTurn is my last choice because it’s made of plastic and also no bank selection.

Commander is smaller/beater but doesn’t do variable CC (not a deal breaker) but I cannot see any videos/chats about using this or the FCB1010 for anything but axe/Kemper/bog standard preset stuff.

Any current/old users want to through their $0.02 in?

In the facebook group BeatBuddy Drum Pedal Owners, there is a person who has connected the midi commander to the BB. 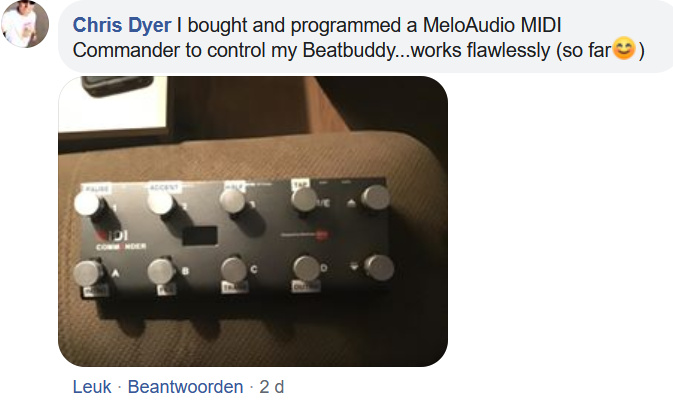 On Youtube there is a video of the Behringer FCB1010 in combination with the BB.

Thanks for that.
I’ll join up to that group and see what’s going on.

The biggest plus are the very silent buttons !
You can program 2 different midicommands per button and even midi-note numbers with velocity !
The left pedal is programmed for total midi-volume en the right one only for headphone volume (monitor !)
Another pro is that my BB is at my bassamp at easy reading hight, and the only time i touch it is for switching to the next song

on the FCB1010 can you have a mixture of latched and momentary on the same bank?

i was messing with the transition looping issue and OnSong triggers. If I changed the global switch toggle I could send CC113:[1-127] (press down) and then CC113:0 on release but then that affected the page/scroll function, which needs global toggle off. So its one or the other though Onsong

If the board can split latched/momentary then i should be able to use switches for page turning but then assign CC113:[1-127] on press AND CC113:0 on release.
This seems to be the only problem people seem to have with transitions and midi pedals.

Also I noticed that on the midi maestro you can go straight to part selection without the fill. Those CC codes aren’t in the MIDI manual… any ideas on that?

Midi Maestro BB Commands.pdf (33.4 KB) The attached document shows the Midi Commands sent by the Midi Maestro in BB mode, as read by Midi Monitor. For the tempo commands, Midi Monitor is reporting a set of General Purpose commands. Are these Sysex, Program Change? It’s unclear to me. I did note one troubling issue. I tried to grab the Aeros Command set as well, and the song part commands in 6x6 mode use the same CC command structure as the part commands for the BB, i.e., CC 113, followed by t…

Its CC113 followed by the part number.

CC113:[1-127] will always play a transition fill before moving into the part requested as the 113 command is the fill itself.

On the midi maestro video it shows this function but also a page which goes direct to the part without the transition fill.
Curious what those codes were?

Unsure on how to use GP commands TBH

So don’t believe me, then. It’s 113 followed by the part number on Midi Maestro to the Aeros. The Aeros has no transition parts. Yes, if you are using the BB with the Aeros, you would get a transition, but given that the Midi Maestro has a separate Aeros and BB mode, both on channel 1, for now, that’s how it is.

Not saying I don’t believe you but that contradicts what the online videos and BB midi manual point out.
The CC113:[1-127] uses a transition fill and then the part number.
If the maestro uses the same commands as part selection with and without transition fill then theres something else going on inside the programming