Got my MM today. Started by resetting BB (fw 3.8.0) to Defaults. Connected MM MIDI OUT to BB MIDI IN and left the other MIDI cable not connected at this point.

I later checked BB’s MIDI-OUT config, and found it was set to ‘MIDI-OUT’, not merge or thru. So I’m wondering if the following is some kind of bug. Admittedly, I don’t know a lot about MIDI.

With that said, I did connect the other MIDI cable later and immediately had an issue whereby MM was sending tempo that seemed to be in the sub-20 BPM range. Hard to say for sure because BB’s tempo readout was still showing the song’s default. I did, however, see what looked like a syncing icon/symbol to the left of BB tempo readout on the Main display. The icon kept showing up, then disappearing. So, I did the BB settings reset thing again, powered both units off, alternated which one I powered on first, one or two other troubleshooting iso tricks - nothing changed until I disconnected the MIDI cable. Immediately upon doing that, BB jumped to the correct tempo and MM default template resumed working with BB.

So, putting that aside, what was my first impression? For me, MM buttons are loud. Plenty has been written on the topic of loud buttons. Charts of dB tests have been uploaded, audio recordings of button presses have been uploaded. Apparently, button loudness is a subjective thing, a matter of what you notice or are willing to tolerate. Moving on…

Since the companion app is not yet available, there is no way to modify MM’s button settings. (Where the heck is the manual?) So I tested MM’s default BB config. Here’s some of what I found.

Since there is no documentation/manual to speak of and no config app yet, I don’t really know that I’ve got here. Fingers crossed that I will be blown away by MM’s capabilities. Truthfully, I’m quite interested in what can be done with custom mode.

I’m with you on this, more or less: Without the app, it’s a nice, well-built piece of gear, but I won’t be able to asses it’s true potential until I can program it.

Most of the other things you mentioned, though, are (as I understand it) the way MIDI typically works: START-STOP mid song are what MIDI calls pause/restart; SCROLL means one at a time; and a song isn’t loaded (so you can select a specific part) until the intro finishes playing. But you MAY be able to program around most of these things. And I hope you can, especially your scrolling idea, because that is brilliant.

Agreed. Having it locked on channel 1 is a major limitation, at present. Once we get the app, we ought to be able to make it work to suit our individual layouts. I am real concerned about how it will integrate with OnSong and the Yamaha Bluetooth unit.

Seeing how it is layer out with the sub-menus, though, does have me excited for its potential. I do fear, however, with this app to get done, plus the ongoing Aeros updates, and the need for a slew of BB Manager improvements, that the Singular development team will be overwhelmed. For now, at least, they should have job security.

I am real concerned about how it will integrate with OnSong and the Yamaha Bluetooth unit.

Received my MM today! Hooray. I am concerned with the same thing as Phil Flood mentioned above. This is what I found on Facebook but I’m not quite sure what it would look like. 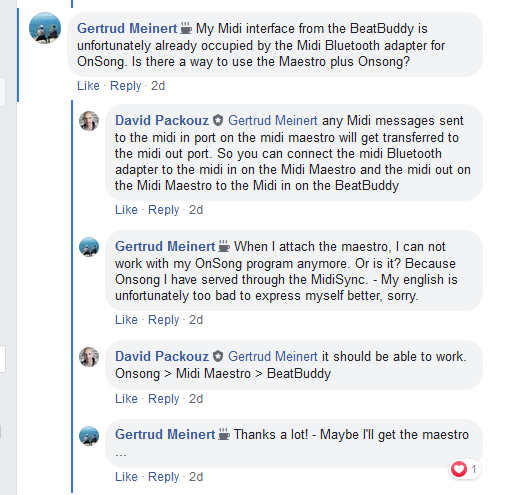 So I got a little time with the MM today. Overall, I think it has great potential. I like the buttons and while there is a little click, it doesn’t bother me at all. The basic functions are fine. I’m very excited to see what this can do once the app gets released. A couple of issues for me:

Any help or confirmation on these items would be appreciated.

I think it will be a great addition to the set-up once the kinks are worked out and the app release should do a lot of that.

It sounds like @DavidPackouz believes the MM ships in MIDI Merge mode, but it actually ships in MIDI-OUT mode (maybe he can chime in here). But l have to believe the app will give you the control required to change that.

I guess I think of MM‘s default button action for song selection as “advance” or “next/previous” or “increment/decrement by one” per button press. I’d like to be able to continuously move, which I think of as “scroll”, thru the list for as long as I hold the button.

…and you’re not alone in that. But “normal” language anmd MIDI terminology aren’t always completely aligned. I suspect that if there is no scroll function on the BB (one that doesn’t blow past ten songs/second), there won’t be one (easily) added by the MM.

But I’ve been wrong before. Just the once. But it has totally happened.

I’d like to be able to continuously move, which I think of as “scroll”, thru the list for as long as I hold the button.

Bootsy, sorry that I can’t help with your issues. All I can tell you is that my setup works the way that I think you’re looking for.

Hope this helps. If anyone has a better way, please share.

So, you’ve created a closed loop. And it works. Interesting. Moreso in that MIDI is designed to be used serially (i.e., in a line) and not in a loop like that. But then, I think you break the loop (branch it, actually) by inserting the Bluetooth adapter. Nice creative solution!

Are you only using the Bluetooth adapter (that sends to the MM) because it gives you Onsong control of the BB?

I agree. Pretty much what I was getting at:

[quote=“richo, post:1, topic:16532”]…Scroll buttons should either auto-scroll while held, or advance some amount - 5 songs, 10 songs, a user-defined amount - per press. Can MM buttons be configured to do this…
[/quote]

Yes Joe, that is exactly why, I need Onsong control. I believe that the MM is just passing the Midi signal thru to the BB.

My advance to next song button doesn’t even work. Any suggestions?

I was able to get OnSong to work with Beat Buddy and MM!!!
I created the closed loop that Dr. C had. The issue was that the midi going into MM out wasn’t flush. I’ll need to get a better connector for that.
I use OnSong to select the song on the Beat Buddy. Works beautifully. Still wondering about these issues:

Did you try resetting BB? In the menu of the BB unit itself?

Haven’t. Will try tomorrow and let you know. Thanks.

Did a reset. Move to next song still doesn’t work.