No Sound from MIDI drum file

LOST…i’ve a large number of MIDI drum files that i’ve been using in my DAW (Reaper). Work fine, and produce sounds there. Ex. 36 is Kick, 38 is Snare etc. But when I insert them into BB don’t produce any sound. Is there some conversion that is needed on MIDI files before input into BB? Do these lines need to be moved up or down to a different piano key number?

FYI i have tried to research this in the forums, and also looked at several Videos about BB, but nothing seems to address this kind of a problem

How are you inserting them into BB? Are you adding them to a new song in BB Manager? Do you have BB Manager installed on your computer?

Of course BB Manager is installed. Firmware has been updated. I’ve clicked on the 3 dots in the Intro section ( as an example) and then selected my Midi file. I can edit it and see the drum beats. But no sound is produced.

Might it have to do with some issue with the drum kit? I have tried using a couple diff ones but get same result.

Send me one of the BB .sng files you have created. I have an idea of what might be wrong, but I want to take a look before I make a bunch of wild guesses.

hope this works, this forum is new to me. Should be getting the Song file, as well as a pic of what it looks like in my DAW program (reaper)

Here’s a quick indicator that your export from Reaper is not quite all there yet: when I open the song in the BeatBuddy Manager (BBM) MIDI Editor, I see that the only notes that end up in the BBM is not 74 which is Not Supported. If there were other notes, they would appear as slightly darker gray in the column of MIDI notes. 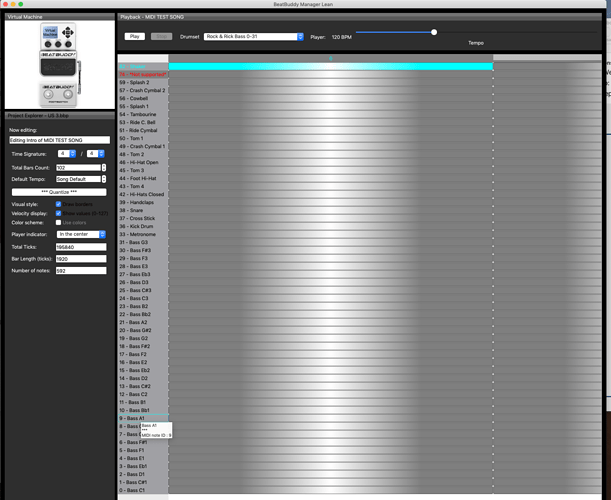 Yes i see that too…so…what do I do. They are OK in the midi
file itself from my DAW. seems like BB is maybe inserting them in a
different location for some reason??? Could it have anything to do
with the way a drum kits thinks it suppose to have it. I have tried
using a couple diff kits, but seem to get same reslut

I took that mide drum file, in my DAW, and Exported it out, as a NEW
MIDI file, and…its looks fine, and it plays fine, all notes are
in correct postition. Seems to me…BB is doing something when it is
brought in.

Please post the MIDI file you export from Reaper.

It also could have something to do in the Reaper settings or your Reaper process of exporting MIDI tracks to MIDI files. Perhaps something in your process has changed? The BBM does a great job when you add a properly file exported to MIDI from any DAW.

Might also be helpful to know exactly how you’re exporting the drums and bass tracks to a MIDI file from Reaper.

Very quick set of screen shots of the the steps of how I export a track to MIDI file from Reaper: 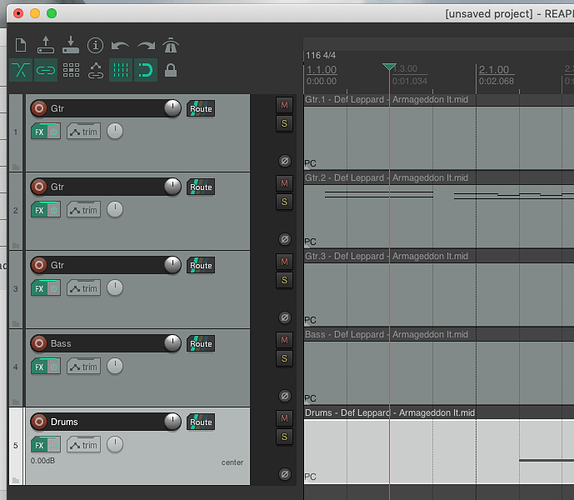 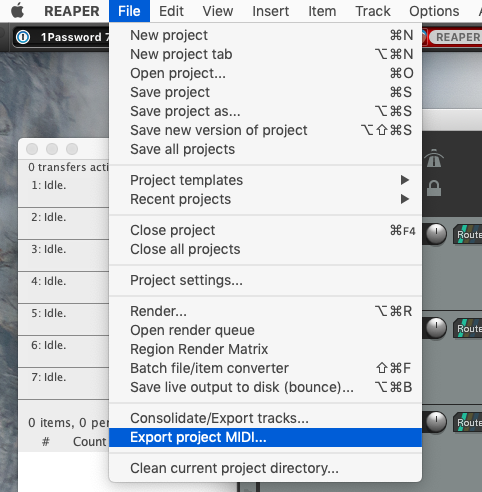 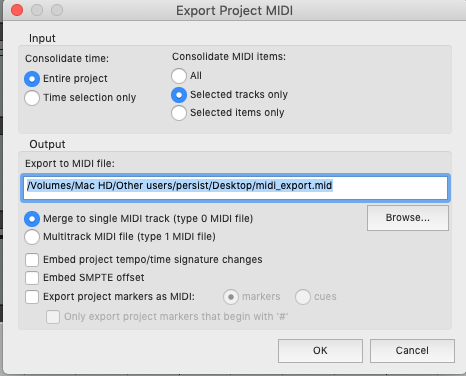 What your BBM MIDI Editor window would look like (note that the red Not Supported notes should have been lowered two semitones to 45—you could do it in the MIDI Editor, but best to do it in the DAW before you export)

Your problem is not what I thought might be the issue. That being the case, follow Persists’s recommendations re: the Reaper export process and see if that fixes it.

While we have seen some issues where BBM moves a midi part from where we thought it would be exported, that movement was always along the timeline, not with any midi placement along the 0-127 note position. Since the notes appear to be at the right time, bu in the wrong note position, My belief is that the problem is being caused by the Reaper export. Check to see that the track you are exporting from does not have an active “transpose” setting.

First off…THANK ALL OF YOU for your responses>

Here is what my Reaper MIDI setting look like. Seems the TYPE option is different in your example. I have no idea what that is, or means.

As had said before, the Original MIDI Input file, and the Exported output file, both look the same. the notes seem…to be on the correct piano numbers. 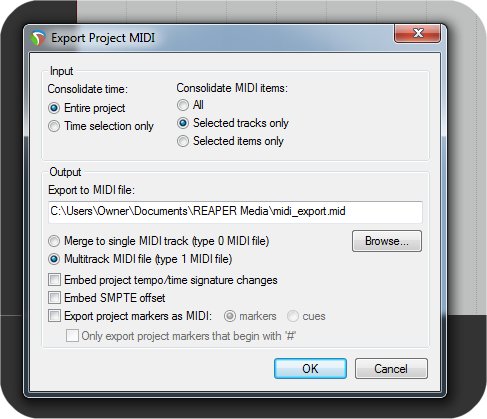 It’s the type option. Change it to Type 0 (to match my screen shot) and this should solve your problem.

What it means that when exporting as a multitrack MIDI file, the BeatBuddy Manager (BBM) sees only 1 of the ≥ 2 MIDI tracks. So if for example in Reaper you had selected the bass (or some other instrument’s MIDI track) as well as the drum track and exported to a MIDI file as a multitrack type MIDI file, it would not see all of the MIDI notes. The BBM requires that the 2 MIDI tracks be combined and then exported so that all of the MIDI notes are in one track.

Were you trying to export to MIDI for a one-press song that included bass? If so, you might want to make sure that the notes in your MIDI bass track were lowered to fit between 0-31. If you had transposed the bass notes to that 0-31 range, you probably should have at least seen or heard those notes in the BBM but not the drum notes) when exported as a multitrack MIDI file. As it is, I only saw 296 notes in 74 (Not Supported).

Looks like that fixed it…THANKS SO MUCH. Seems in my reading maybe missed that info\instructions somewhere, i’m sorry.

One last (?) thing, I noticed, some songs that i downloaded from BB resource areas, Ex House of the raising sun, put out by other members…some of these don’t seem to play correctly either, When i look at them, some have notes on “unsupported” lines. Seems strange, or is there another peice of info i[m not aware of?

There are a couple different midi mapping schemes when you get into the drums+bass or drums+bass+keys stuff. Generally, you’ll need to also acquire the drum kit that the song’s author recommends using. That should solve the unsupported notes issues.

Again, Thanks for you rapid response. Making this new toy…much more enjoyable.

I’ve posted a couple of tutorials on the forum that might help you and here’s a link to one of them: Reaper tutorial for transcribing MIDI source file for the BeatBuddy

Here’s the other: Use Reaper to transpose bass notes from a BBM File Exported to a MIDI File

Once again…thanks so much for you time.