Apologies in advance if this is a dumb question. I have watched several of the YT videos on how to import the premium content you can purchase into BB. It seems straight forward, but I have one question.

The videos illustrate that once you import the premium content, it will appear as a new folder in the BB manager. I use OnSong to select my songs and tempos, by typing in the MIDI commands with the OnSong editor. I prefer that to OnSong’s GUI for adding MIDI commands, because I can then open the editor and see what is going on more easily. To keep these edits as simple as possible, I like having all the generic Blues, Country, etc. Beats in one folder, rather than scattered about. I know its only one more number in the MIDI command in OnSong to address another folder, but in the heat of battle, I sometimes get confused. Having separate folders does make sense to me for specific songs, such as Eric Clapton’s Greatest Hits, etc.

So, my question is when I download generic premium content, such as Gig Essentials, can I put them in the generic folder 1? In other words, can I put the new generic Blues bests into the standard Blues folder etc.?

When you buy premium content and download it, it is in a .pbf file. This is a Beat Buddy specific container for a folder. It allows multiple songs to be imported all at once. In Beat Buddy manager, you will go File>Import>Folder, and the purchased folder will appear with all of its content inside. Then you can display the contents of that folder in BBM and click/hold/drag any song in the folder to any otherr folder. The song will appear at the bottom of the target folder. If you want to move it around within the folder, the same process applies.

Thanks, Phil. That makes sense.

I have downloaded 4 beat premium libraries and after decompression none of the folders contain a .pbf file. The closest thing is a Powerback Archive File. I am using windows 7 and current BBM. Having the same issue with the Vintage Drums containing no .drm file.
Also a newbie. Thank you.

I have purchased and downloaded several beat libraries from premium which are zipped files. After decompression there is no .pbf file in the folder. There IS a PowerBackup Archive file in the subfolder with the song folders. The same issue with the Vintage Drum kit not having a .drm file. I am using Windows 7 with current BBM version. Project installed and working nicely on the PC, My BB is arriving shortly and just trying to get ahead of the game with professional beats I need.

I just this minute downloaded the Vintage kit, and this is what I see

I have the same files but they don’t have the extensions .drm/.pdf. BBM won’t recognize without the extension. The downloaded file has the .zip extension, though. Also, in my file manager this is standard. The extensions aren’t shown but the Type column tells what type…duh.

I realise you’re using a different Windows version, but there will be an option in Win7 to toggle whether file extensions are shown 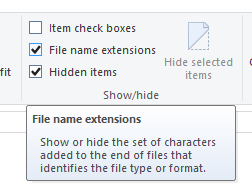 Okay. I got the file extensions to display (thank you Google!) but BBM still says “not portable file format” for both beats and drums when I try to import.
.

Which version of BBM are you using?

And you are importing the drumset via File > Import > Drumset? 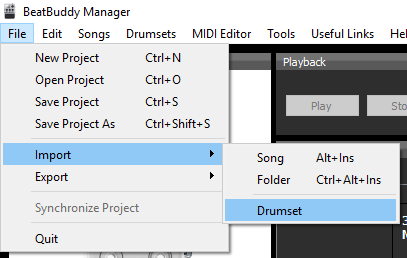 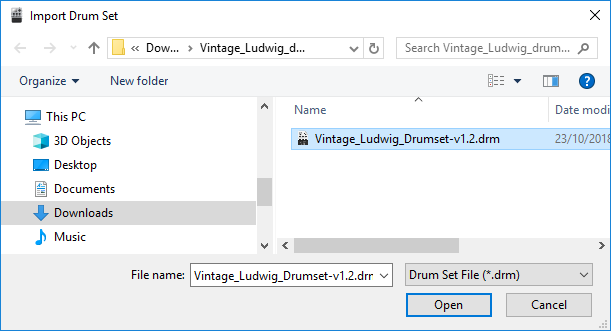 Yes, exactly. Instead of giving me a warning it just goes back to the main screen with no activity.

If the drumset is not then in the Drumset list, I’m not sure what’s going on … 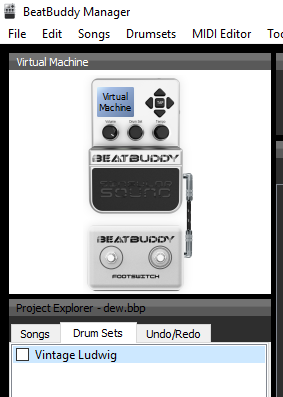 Yeah. I’m with ya, Ghost. I may have to reinstall BBM and try again.
I’m in Japan and it’s 11pm so I’ll work on this tomorrow.
Thanks for all your help. Will post updates if I succeed.
Thank you.

I have uninstalled and reinstalled BBM with no change. Still researching but will probably wait until BB arrives and work off the original SD for comparison.

Sometimes the downloads are quirky. Delete the content that does not work using the BeatBuddy Manager (BBM) and re-download the premium content from your account and use the BBM File > Import > Song, Folder or Drum set.

Yep. One of the first things I tried.

Are you able to import songs, folders or drum sets from the forum and if so, do they work?

I did a couple of simple ones that were available and they worked fine. I haven’t gotten too deep into it other than to purchase the premium packages for the stuff I need at this point.