anyone know how to split a song up into parts using speedy midi or something similar ??

What do you mean by “parts” in this context? Verse/chorus, or drums/bass?

I’d imagine it’s as simple as cutting the MIDI file and exporting it in those chunks, just make sure the tempos of your song and the session on the MIDI editor are matched and you have the measure # right. I have never used “speedy midi”, is that an application?

It is, especially if we’re talking about commercial songs, which tend to be quantized to death.That said, though, do make sure there are no notes that cross boundaries between parts or you’ll end up with a double tap at the beginning or end of your parts.

Another tip: If the original part has the fill at the end of it, you have two choices:

What else do you need to know?

I think he wanted a free or cheap program, like speedy midi. I’ve quit making recommendations.

I’ve used Reaper to select MIDI chunks and save them as MIDI files. Pretty easy. Reaper can be used free, but well worth its cost.

yes its a free midi editing app but there doesn’t appear to be a split option.Do you use a midi editor that does that ?
Thanks
Brent

How do I get reaper to play a midi file there is no sound when i import these ?

Try these steps below. This should be the equivalent of what persist covered in the thread but for Windows operating system. Hope this helps! In REAPER preferences, change the “Audio / Device” setting to “Direct Sound” [rpp_settings] In REAPER preferences under “Audio / MIDI Devices” , enable “Microsoft GS” (right-click) [rpp_settings_midi] In the MIDI track, click the “Route” button [rpp_route] In the MIDI track route window, change the “MIDI Hardware Output” to “Microsoft GS” [r…

Along with Persists post, this is how I route MIDI to the soundcard sounds. Note the ‘routing matrix’ tab bottom left 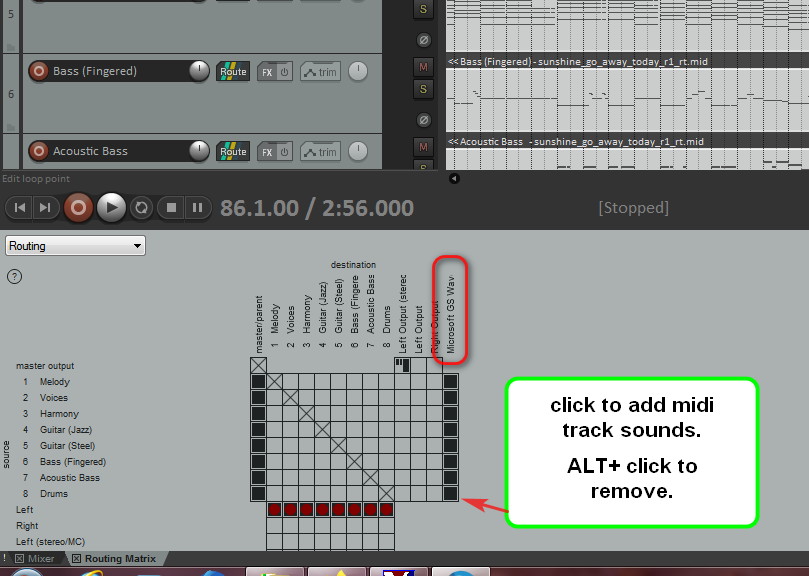 You need to ADD via FX option on the MIDI track, a VST instrument.

This totally worked thanks I have tried for some time to make this happen !