With "odd" time signature 6/8, clicks are not perfectly in sync with BB drums

I often want to start playing guitar without drums, and I want drums to kick in later, so I “start” the BB (to make it send START command via MIDI, so that Aeros will keep in sync, but it does not start recording automatically), then I pause BB (which is a “mute” pause), then I start recording on Aeros, and when I want drums to kick in, I do the fill on BB or just unpause it. So while I’m recording the loop without drums, I’m relying on clicks which Aeros generates.

I was always bothered by my loop not being perfectly in sync with the drums. For some time I was trying to think that it’s just my playing being sloppy, but today I actually did some testing, and indeed, on time signature 6/8, on 60bpm, clicks are off by 20-45ms! (comparing to drums from BB). Take a look at the screenshots:

Left channel (above) is BB, Right channel (below) is clicks from Aeros:

So Aeros generates the click a bit earlier than BB generates a drum hit. If we measure the difference, it’s from ~25 ms: 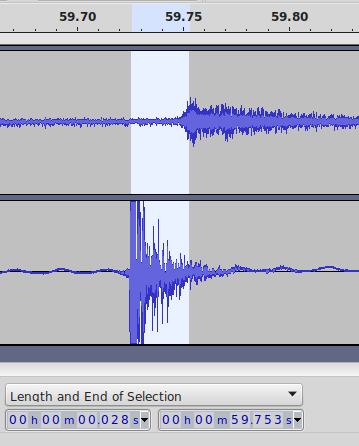 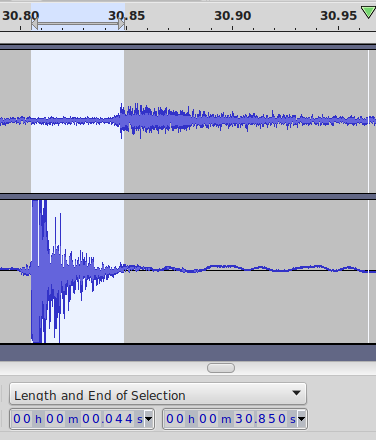 It’s pretty annoying, it’s enough to make people hear that the loop isn’t really in sync. I’m actually not exactly sure whether it’s a problem with BB or Aeros, but those two clearly disagree on something.

Interestingly enough, things are fine on the signature 4/4, clicks are at most a few milliseconds off, I personally don’t hear it. But on 6/8, it’s really bad.

For what it’s worth, also attaching the mp3 file from which those pictures were taken: clicks_6-8.zip (forum doesn’t allow to attach mp3 so I had to zip it)

I was using 60 bpm for those pictures; on lower bpms (like 40bpm) the problem is even more obvious.

Would you please look into it?

Hey there, thank you very much for this in-depth look, we will most definitely be finding ways to make 0 latency on these clicks, this should not happen. I have reported this to our R&D and we will definitely be looking to solve this problem ASAP.

Thanks @BrennanSingularSound , appreciate that response.

Just to add some more info: today I also did some experiments on 40bpm and routing clicks to AUX (with the same time signature 6/8), and the difference between clicks and drums is sometimes more than 100 ms:

Also sometimes the clicks aren’t monotonic. On 40bpm a measure takes 4500 ms, and since we have 6 beats per measure, the delay between beats should be 750ms. And take a look at those adjacent 3 clicks: the delay between first and second is 690ms: 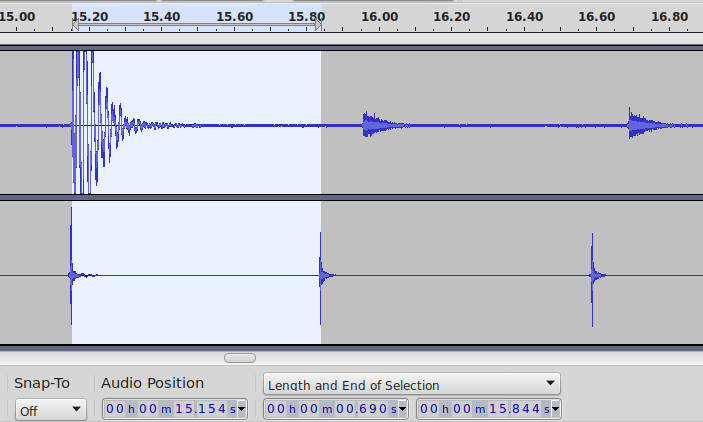 But between second and third there is 753ms: 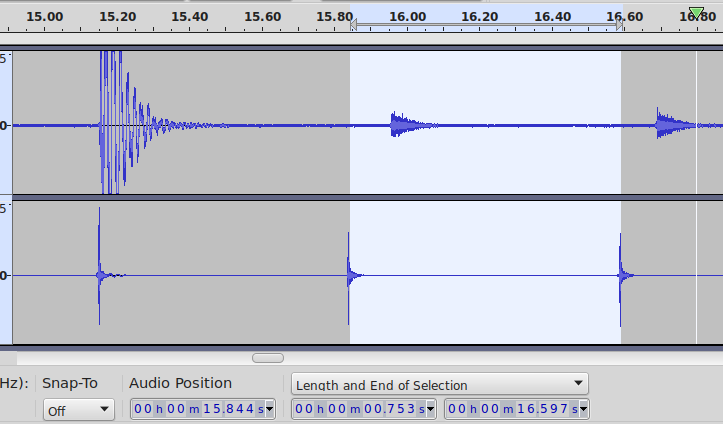 Would be great to see the MIDI clock messages (which BB sends) along with those waveforms on a single timeline, but that’s a bit more challenging for me to set up, so I hope you guys can do that.

I’m glad that your R&D team is going to look at it, please keep us posted.

Appreciate all this, thank you.

@BrennanSingularSound you posted that in the 2.17.x thread:

The click issue was presumably solved, are you saying you tried it and it is still having issues?
Please let us know if this is the case.

So I’m bumping this thread. Yes I am still having issues on 2.17.1. Curious what do you mean it was “presumably solved”? It’s very easy to reproduce:

Can you reproduce it? I can create those waveforms again, but again, one can hear it with the naked ear.

Presumably solved because this was fixed in 4/4, will look into it thank you.

Presumably solved because this was fixed in 4/4

To make sure that we’re on the same page, to my knowledge it was never a problem on 4/4 (or at least, it was a lot less of a problem). I mentioned in my first message:

Interestingly enough, things are fine on the signature 4/4, clicks are at most a few milliseconds off, I personally don’t hear it. But on 6/8, it’s really bad.

will look into it thank you.

Thanks, please keep me posted.

Any update on that? I confirmed that on 3.0.0 it’s still not fixed