So, i have been programming my own drums in Pro Tools for a while now, which means that I have a bunch of MIDI tracks I’d like to use with my beat buddy. I’m trying to experiment with getting them into my beat buddy, but I can’t seem to import the midi file.

Here’s what I’ve done so far:

-Exported my MIDI from Pro Tools, which gives me a .midi file
-Checked to see that the .midi file works in another DAW (Logic and Garageband) – it does
-Opened BBM, clicked new song, then clicked ‘Add From MIDI File’
-Go to click my .midi file for import, but it’s greyed out.

-Quit and restart BBM (.midi file still greyed out and can’t be dragged in)

Here’s the file – I just exported the whole song. I wanted to import the whole song just to get started familiarizing myself with the process before i started exporting midi part by part.

I checked a couple videos, and it seems like i should just be able to import a midi file easy peasy. is there something i’m missing?

-Go to click my .midi file for import, but it’s greyed out.

Your MIDI file extension should be .mid and if the extension is .midi, the BeatBuddy Manager (BBM) will not recognize it although LPX and GB will).

(.midi file still greyed out and can’t be dragged in)

Using your Mac’s OS to perform operations within the BBM will not work.

Just checked your MIDI file too (thanks for attaching it) and I’ve spotted a couple of other problems that you’re going to encounter when you try to play your MIDI in the BBM:

That’s awesome! thank you so much. I had emailed myself the midi file so I could do the beatbuddy stuff on another computer; when the MIDI is exported from Pro Tools, it is a .mid, but when I download the file via email it becomes a .midi file for some reason. So, after some tooling around, i managed to get what I want.

I’m running into some hiccups here and there–it looks like the midi drum kits I’m using are mapped pretty differently from the kits in BBM.

Sometimes, I’ll pull in a midi file, and it will generally play correctly, but is missing a few notes. So, I open the BBM Midi Editor, and it plays back completely different sounds from when I audition the file in the main BBM page. Also, if I open the editor and quantize the beat, i get a third set of sounds.

I’m sure I’ll be able to work it out, but there has to be a faster and more efficient way for me to accomplish this task, isn’t there?

EDIT: When it plays back in the BBM main page, there is no drum kid selected, but when I go to edit it in the BBM Midi Editor, the kit changes to rock kit.

EDIT 2: I’m gonna see if I can’t figure out how to map the drum kits I’m because it’s real slow going trying to put these midi notes where they need to be to work with the BB rock kit. I’ll follow up.

EDIT 3: LOL, oh man, looks like I can just move notes by right-clicking in the BBM. Apologies to anyone on staff who has had to read through all this, but I hope this helps some other chowderhead like myself later down the line.

Your first takeaway is to not use the BBM’s MIDI Editor for anything other than to check for Not Supported notes. The issues with sound that you’re hearing have been noticed by other users and reported to Singular Sound. The reason for this is that the MIDI Editor was grafted onto the existing BBM and as such, it has always been wonky Although SS is aware of this, they’re probably not going to do much to fix the MIDI Editor issues.

The BeatBuddy (BB) drums conform generally to GM (General MIDI); since the drum sets are limited to no more than 100Mb and to get the best audio quality from the drums, SS deleted duplicate drum instruments such as certain toms and some cymbals. Once you get used to this, it will become much easier to create or edit your beats. Search the forum for BeatBuddy MIDI map that users have shared with the forum.

This is probably because you have not designated a Default Drum set: within the song—not the Drumset in the Playback window at the top of the BBM frame.

well, somewhere along the line I really borked myself. Now my SD card says “No SD Card” when i put it in the beat buddy, and “no song” when I press the pedal. I’m gonna keep trying to figure this out, but it’s definitely not as easy as it should be. There’s not a lot in the manual about how to use the BBM and your own midi files, and while the forum should have a wealth of information, I don’t know exactly what I’m asking after quite yet, which makes it hard to search for. I don’t want to give up, but I’ve gotten nowhere (haha, actually now I’m a few steps back) in the last 24 hours. oof.

The error message “No Song” usually means that the content on the SD card needs to be replaced. In rare cases the files on the SD card are faulty or missing. Please go to the following link: Download updated SD Card backup Download the file called “SD CARD BACKUP”. Once downloaded to your desktop, unzip the file (if you can’t unzip it, you can download a program to unzip it at rarlab.com), delete the files that are currently on the SD card if there are any, and replace them with the unzipped… 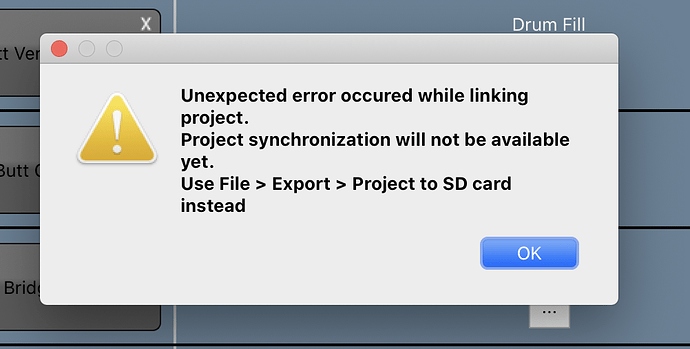 Any idea what this means? I got this error after after going File > Export > Project to SD card.

Make sure SD card is not locked.
Try File - Export - Project to SD card again.
Keep in mind that Synchronization will work after this until you quit the BBM or restart your computer (known bug).

SD card is not locked. I keep getting that error. And when I quit the BBM, i have to go back to an older version of the project, re-create my folder and songs, re-import the midi, then i STILL get this error, which means I can’t use my own songs on the beatbuddy. really appreciate all your help @persist but I gotta say @DavidPackouz this BBM experience of trying to get my own songs onto my beatbuddy has really dampened my excitement for the product. it’s great for jamming or whatever, but all i have to say is WOW, this BBM software is a real let down. it really shouldn’t be this hard or fraught with errors and mishaps.

I’m working on a private message with some help and will send it to you around 7 PM EDT.

UPDATE: Check your forum inbox for the PM I sent.