How are you using Midi Maestro

Hi Jared I am trying to create a similar MM custom mode (change parts on BB and mute tracks on Aeros) but so far can only control the BB (set to channel 1 while Aeros is set to channel 3). Any words of wisdom?

in this set up (picture above from manual), where would i plug my yamaha bluetooth midi in and out so I can use Onsong to change songs (and parts, etc?) on the BB and Aeros? Thanks!

Just plug the BT device into the BeatBuddy and then the BB into the Aeros. There are still improvements needed to make the Aeros capable of using a song selection like the BB does, the best way to currently use Aeros with BB quickly from song to song is to create fresh songs on Aeros. We have understood this is not how some users play, and soon will have a solution that will work for both devices to also still work with OnSong users.

Thanks for the question!

Hi -
thanks for responding… I got the aeros and beat buddy a few days ago and am starting to feel more comfortable and getting some good results.

I really had the impression that song selection was possible on aeros… seems like kind of a basic function? any other methods/tips in the meantime would be much appreciated.

I’m using one as a paper weight and the other one as a door stop. I’ve given up on using them for anything else because there’s no editor for iOS or Mac.

2 posts were split to a new topic: MIDI Maestro Issues?

I was originally using the Midi Maestro with the BeatBuddy and Aeros, but I expect to sell both of those units as they appear to be mainly for live use, which I don’t plan to use them for. However the Midi Maestro is very useful for controlling Ableton Live and a Kemper. The android app seems to do mostly what I want, but I am eagerly awaiting the custom mode expression pedal functionality. That would basically complete what I would like it to do.

Its main use now is for remote record actuation with Ableton Live. I have it communicating through BLE with an XVive MD1 plugged into the midi interface of a Maschine MK3, and it works very reliably and consistently that way.

After using midi footpedals for decades (and even building and programming a couple), IMHO the Midi Maestro shows a lot of unrealized potential. For example it has one trick that is game changing for Kemper users; it appears you can access the Kemper internal looper with the MM as it has NRPN capability. Just about anything I can think of needing in a midi controller can be done with the MM, provided they get the expression pedal working in Custom mode. I was initially very frustrated with the MM, but after reading the manual and giving it some thought, if Singular Sound delivers with v2 of the MM firmware, it will be one of the most versatile and useful midi controllers available. IMHO it is worth a bit more patience.

Have been using the Maestro in lockdown and am preparing to start using it in live performances for the first time. I find, however, that I’m having to look down more often to make sure I hit the right button. Not so much a problem for me as I use a head mic rather than a mic on a stand. The idea was to give me a chance to move around the stage more, though having to be near my pedal board kinda puts the mockers on that! Much prefer the head mic although you can’t pull away from it if you’re going for a full blast chorus, and casual chat between songs ought to be avoided. However, on our live streams that’s become a part of the experience.

I just got my Loop Station and MM a couple of weeks ago so maybe my timing was good as far as the midi implementation, but I’ve had very good luck using the custom mode on the Midi Maestro to control the Aeros Loop Station. I have several pages I use as follows:
Page 1: has buttons to start a new 2x2 or 6x6 song and buttons for the 2x2 page and the 6x6 pages
Page 2: is the 2x2 control page. I have dedicated buttons for each track “Undo/redo” and “mute” as well as a “stop now” button.
Page 3: is the main 6x6 page with links to the other 6x6 control pages which are: A mute page, a undo/redo page, a solo page, and a part select page.
Pages 4, 5, and 6 have dedicated buttons for muting, undo/redo, and solo. these are for tracks 1-5 since I have to leave one button available to return to the page 3 main 6x6 menu (since there are only 6 buttons!)
Page 7 is the “part select” page which allows me to select parts 1,2,3,4 or 5 with one button instead or tap dancing on the “next part” button to scroll through the selections. This is very handy!

This is great. Any chance you can map out the 6 buttons on each page? I’ve made so many iterations so that I can always get out of the page I’m on, it’d be nice to see how someone else successfully did it for both 2x2 and 6x6 mode. 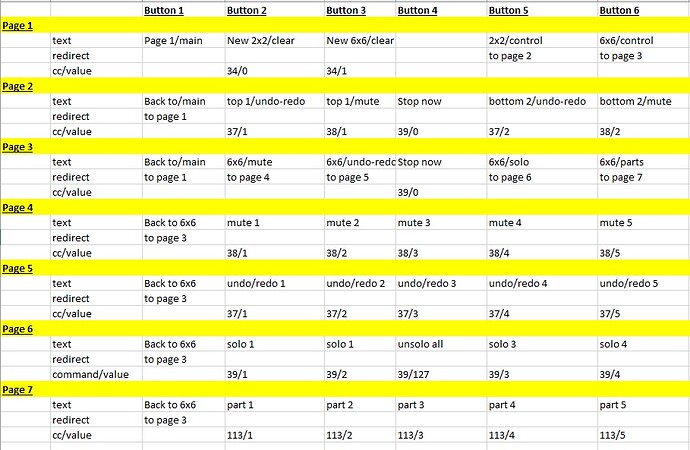 Here is a spreadsheet that shows my pages and settings

Hi Jared,
I have an MPC One, and would like to use a footswitch in order to start/stop songs of course, but also to select/mute patterns/sequences (like verse/chorus/solo for example). Is the Midi Maestro OK for this?
Thank you in advance for your attention.
Best wishes,
Fred

Yes, I currently use it for starting, stopping, and changing sequences on the MPC One. I have another hand triggered controller I use for track mutes, but you could also use the Maestro for that.

Thank you Jared, this is exactly what I need then

I wish I could contribute and report I am using MM in a unique way… I certainly am trying to.
Attempting to control Ableton Live 11 through it’s built in midi mapping capabilities from my MM. I have MM connected from midi out to a motu micro lite midi in port. The port and the cable are functional and verified using another midi controller in same setup. I have the MM custom mode programming app on Android and have successfully mapped the upper left stomp button to a command called “DO SOMETHING”. Drilling down into that element I’ve tried assigning a NOTE, a CC, a Program Change. I’ve tried multipole MIDI channels, commands, and values for each attempt.

I get no response from Ableton in midi map mode - no recorded command, not even the blinky light that is supposed to show up when a midi controller issues any command.

I have ruled out Ableton as the culprit as I have successfully mapped foot switches from the Helix Floor using the same midi cable (after disconnecting the MIDI-over-USB connection so as to get a clean and isolated midi over midi signal). That works like a charm just don’t always want to lug the helix around and thought I had purchased a nice compact midi controller in the MM. I’ve watched Singular Sound Midi Maestro Custom Mode | Ableton Foot Controller - YouTube - one of the few videos in English I can find on this issue - but it doesn’t help much.

Any help would be appreciated.

This is my way to use the Maestro Ableton is maybe waiting for the ‘release’ after you press a button, likely the same CC value 0 or the note off command corresponding to the note on.

So if cc13 value 2 presses something, likely c13 value 0 will let ableton know you stopped pressing

Let me know if this helps!

Hi Jared, I received my MM, but as the connection to the MPC One is not very intuitive for me (I have never used any midi controller until now), I wonder if you could recommend some videos for me, as I did not find any until now. For now, I just need to have the MM communicate with the MPC, in order to start, stop and change sequences on the MPC One, like you do.
Thank you in advance for your attention.
Best wishes, Fred