Here are a couple of helpful keyboard shortcuts for the macOS version of the BBM.

I use them all the time in the BBM and macOS users can easily add them to their BBM app. The shortcuts are for exporting songs or folders from the BBM.

Here’s a link from Apple on how to do it. I’m also including screen shots of what they look like.

On your Mac, assign your own shortcuts to menu commands in any app or in the Finder. 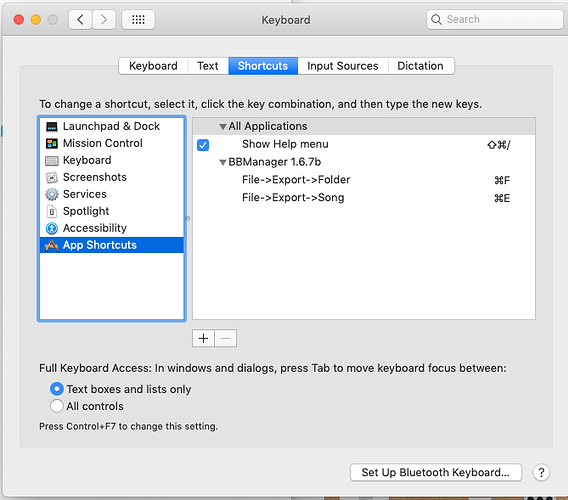 Sorry, but I could not find a way to add these shortcuts to the Windows version of the BBM.

You’re probably noticing that there is no keyboard shortcut for Synchronize Project and that’s because the macOS version of BBM 1.6.7 has an issue preventing it from working (the menu for that function is greyed out). Singular Sound had a developer fix this issue in an unreleased beta 1.7b2 or BBM Lean). The Synchronize Project capability works in this beta version but because it had as many bugs as the older beta versions, Singular Sound opted not to make this particular beta available. However, if you are a Mac user and you’d like to use the Synchronize Project instead of relying on the Export Project to SD card all of the time, feel free to contact me via PM and I’ll provide a link to the BBM Lean beta. Keep in mind though that it is an unsupported version but I’ve found it to be quite reliable and I’m able to easily work around the issues.

I’m currently using a Mac Studio (new) 32GB of RAM with the latest OS. If you think this BBM 1.6.7 version will work I’d be interested in loading it. One thing I did that messed me up was I had the BB master file in “Documents” like normal then without thinking I added that to the iCloud folder so I could pull all the files from all my other Mac devices when I travel. It messed up the BB Manager so badly I had to import from my SD card which is not recommended and now I have files scattered all a muck everywhere but it’s working. To be able to fix this correctly I’d need to do a lot of work. Someday I might start over then import the new songs and edited drums back in to a clean project. I have I think the 2020 or 2021 complete library so it’s a mess. I had some of the giant files they made in it that take an eternity to load or to sample making it not very useful.