I purchased the BeatBuddy last year to accompany and supplement my guitar and vocal. A few months later I purchased the Complete Collection 2022. Being also a drummer helps me to quickly enough select the appropriate beat. Like most drummers, for most songs, I don’t need to hear the song for very long or at all if I have heard it before to find an appropriate beat and I almost instinctly know which beat to play. I am not a purist or a perfectionist so for me close is often good enough. I say this because from what I can see on the forum, there is a tug of war between expectations and capability.

For example, the BeatBuddy Manager - installed it and dove into it; I watched a few videos and got a sense of its capabilities. One of the songs I play is ‘Time Of The Season’ by the Zombies. I did not expect to find the beat for that song in the library so I quickly jumped into the BB Manager and put down the essentials (Bass drum, snare and hats) using the MIDI editor [piano roll type grid] - that’s all I need. For the breaks in the song I use ‘pause’ on the external pedal. It’s not perfect but it works.

I see a lot of discussion on the utility of Auto-pilot which I gather is simply a full song with all the fills and changes built in. For the song Elenore by the Turtles I simply downloaded a MIDI version of it and isolated the drum tracks in a DAW and put that in a blank song in the BB Manager - presto. It is not my first choice because it means I have to be sure I start singing at the right bar and it’s up to me to synchronize myself throughout the song and right to the end. For me music should be fluid and free. I much prefer having the flexibility offered by the BeatBuddy pedal - so whenever I get to the change, I press the pedal so no pressure as to when I get there. For me the experience of the BB and its software has been positive overall. I don’t beat my head on the wall because it fails to meet my specific expectations. I work with what I have mostly.

This brings me to what I wanted to how I ultimately wanted to work/perform and the means I used to get me there. Below are the principal challenges that presented themselves along the way followed by the solutions I adopted:

The playlists are one way around this challenge but again, they take away any flexibility to mix it up and play the right song at the right moment. Nothing beats an audience to tell the performer (without words) what they like best. The performer’s job is to cater to that and he/she needs to focus on the audience - not on the gear.

I have seen in the Forums that a simple list of the complete library was not available. I don’t care about the reasons why that is and I was not about to sit down and cry about it. So I put the library SD card into my PC and extracted the file list. This was only marginally helpful as the folders were text but the files were in hexadecimal (numbers). So I opened up a spreadsheet in Excel and dropped in the Folder names. Then I manually set about to match up the individual songs/beats with the names listed on the BB Manager and on the pedal. It was a long and tedious task but at the end I had the first necessary piece of the puzzle - a full list of the Complete BB library 2022. I intend to offer that list up to members at no charge but more on that at a later date.

The next step was to bring that list up into a DAW and attach the MIDI code that opens the corresponding song/beat from the corresponding folders. I chose Ableton Live to do this. It was another arduously lengthy task that produced a file which can be used to browse the full list of nearly 3,000 beats in the complete library and prep the pedal with the selected beat. The file is one track with nearly 3,000 clips or ‘scenes’ for those who are familiar with Ableton Live. Now there are no MIDI notes or sounds in the file. There are only Command and Control statements (CC and PC). It just works. When I select a scene/clip, it loads that beat into the BB pedal and I am good to go.

I would like to offer that file up to any Ableton Live users (for a reasonable price) who might find this useful - I certainly did when I was matching up the songs of my song list with the appropriate beat. I will be asking the community what a reasonable price might be for that file. More on that later. 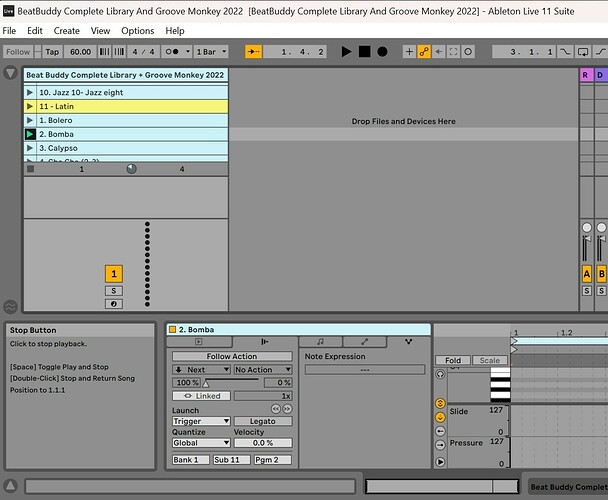 So now my list of actual songs (chords and lyrics) is maintained on an app called SongBook Pro by LinkSoft. I added the tempo, folder no. and Song/Beat no. just under the title for each song in the SongBook editor. But I still needed to get to the final step which was to have a song list that selects the beat and tempo automatically. So until then, I would have both the SongBook app and Ableton Live (my song/beat library) open at the same time and cross reference as I worked. Easy enough but still not ideal.

The final goal was to have a song list from which I could choose a song from a screen and it would automatically find the beat and tempo and pass that information on to the BeatBuddy pedal automatically.

I was initially going to create a file in Ableton Live which would be similar to my BeatBuddy Complete library but it would consist of song titles instead of beats with the corresponding Command and Control code which would specify the folder, beat, tempo and volume for each song. So my song list would have been in Ableton Live. I changed course however when I tried to export a MIDI clip/scene from my Ableton Live beat library to a MIDI file and re-import it into a new Ableton Live Song library or list file. Ableton exported and created the MIDI file alright but I could not import that MIDI file back into another Ableton project. Life is like that. It throws curveballs where you least expect it. I mean just think about this for a moment: I can create a MIDI file in Ableton and export it but I can’t import it back in. No disrespect for the fine folks at Ableton Live and most likely this is in part due to something I missed along the way - newbie with Ableton here. If anyone is able to help me with this I would be most appreciative. I use the Studio version 11.

So my fall back was to look at SongBookPro again. I contacted the company LinkSoft and explained what I was trying to do and they explained that the Tablet version of the app can process MIDI code. I was using the Windows Version but the Tablet version will also work on Windows (11 is what I have). So that is almost an even better solution for me right now as my BeatBuddy loads up the correct beat, tempo and volume instantly upon selection of the song in SongBook Pro.

This is probably similar to what onSong does for Mac users but I own PC’s so that one is not going to work for me. The nice thing about SongBook Pro is that it is a one time buy and very reasonable. If you follow up on that you should be aware that it crashed on me and would not reload at one point. I had to uninstall and reinstall and it has been working fine since. I disable the MIDI in settings on SongBook whenever I open Ableton Live because I suspect the crash was a conflict between two MIDI masters (Ableton is master to BB as is SongBook). 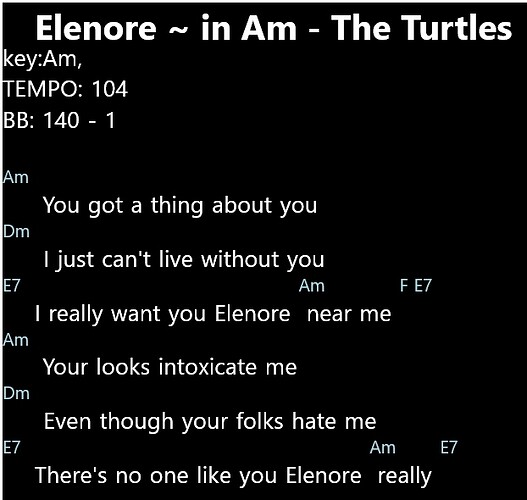 So yes a long post and I am happy with the finished products (an Ableton Live list of all the beats in the Complete library [click to select and load to BB] and a song list that also automatically loads to BB [without click] at the same time as opening up a display of the chords and lyrics.

Who knows what tomorrow may bring but I am happy today. Hopefully that was helpful to other members out there who appreciate their BeatBuddy and want to take it to the limit and then to the stage.

Was this the list you were referring to or something else?

Yes i saw that. But if you look at it carefully you will see the gaping holes. Folders and songs are not numbered, some folders contain a description of how many and type of beat or other. I needed a numbered list that could be used to directly to load beats into BB. As I said in my post I don’t care why there is not such a comprehensive list, I just needed one.

BTW I am not the first person to raise this issue (in the forum) and I have seen many who walked the same path and many of them just melted away in frustration and disillusion.

The type of list I was looking for was available for the Groove Monkey sets. That was useful and made that part of my project a little easier.

I use Songbook on android & was thinking of adding the midi song selection info to each song. I got the impression that the midi commands are to the song & folder number so I assume that any reorganising of tracks on the sd card would put everything out. Any new tracks might have to be added at the end.

Is that your experience?

That is quite correct Doubletime. The example I show being Elenore by the Turtles is in the last folder on the card. I created and named that folder ‘Original’ and I can simply add new material in that and subsequeat folders. My eyes just are not what they used to be so I need a larger monitor than a phone but I just checked the Android version and yes it does support MIDI. I just don’t know how you go from an Android device to a MIDI cable. ??? On the PC I use a Roland UM-ONE-MK2 interface.

I discuss the SongBook Pro coding choice in the Forum at this location:
https://forum.singularsound.com/t/songbook-pro-by-linksoft/31404

Tim McG posted some very useful material on the MIDI coding which you may find useful here:
https://forum.singularsound.com/t/send-bpm-from-songbook-pro-to-align-with-selected-song/31111

Hope that helps and good luck !

I just checked on the possibility of controlling the BB entirely from a SongPro for Android song list on an Android phone. I don’t know how well it works but by getting a cable that plugs into your phone at one end and into a USB MIDI interface cable such as the one I use (Roland UM-ONE-MK2, you can effectively do exactly that. I see quite a number of younger musicians who use their cell phone for chords and lyrics - their eyes are in better shape than mine.,. So yes! Totally do-able. It does mean that you can’t have your phone plugged into a charger or power supply however since that is usually the same connector that would be used. A good fully charged battery might do the trick.