I’ll try to get to this as an OPB later this week.

UPDATE: Phil has posted alphabetized folders of his songs and the song you need is in the folder at this link My folder ... T through Z 2017-12-16 - T through Z

i was able to import the pbf file under a new project. all songs seem to load fine and are listed in the menu on the left. however when i highlight the each song the “play” button isn’t able to push, therefore i can’t hear the song at all. I don’t want to transfer it to the SD card until i hear each song first. what else should i do to finish the upload so i can hear it?
thanks

Sometimes the file does not download completely. Suggest you delete the existing folder from your project, and download and import the folder Make sure that the songs have the associated drum set imported and active in the BBM. You’ll know the drum set is active when there is no asterisk at the start of the drum set name. Save your project.

Did as you instructed. Deleted Project. Downloaded T-Z pbf file again. File Import Folder to access PBF file, uploaded. All songs listed. Drum set tab Blank. In body of BBM says “Drumset Maker” and no asterisk. If it has an associated Drumset it doesn’t download. I do appreciate the help. Sorry I can’t seem to get it.

If there is another file to download, i don’t see any listed but the one.

Your issue may be pretty easy to solve as it appears you don’t have any drum sets downloaded or active in your BeatBuddy Manager (BBM) project. If you don’t, you’ll need to do some reading in the quickstart guide which you can find here: Link (in blue font) for new users resources HINT: read p13 of the Quickstart Guide

Instead of creating a new project, use the existing project that contains the default content and import the pbf file into that project.

You mentioned that there are no drum sets displayed when you have the Drum Sets tab open. This indicates that you have not downloaded, unzipped (if needed), used the BBM to import the drum set and then activated it. The other indicator is the asterisk (*) in front of the drum Default Drum Set: which means you don’t have the drum set that the song calls for in your BBM. There’s also the possibility that you don’t have the default content in your BBM either. 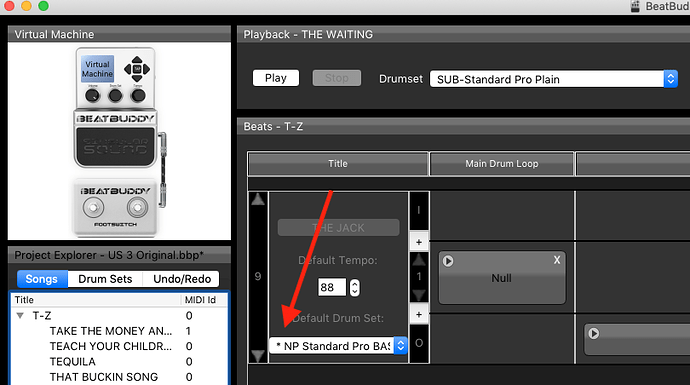 Let’s save you some more trouble. If you have not purchased any premium drum sets from Singular Sound, you’ll need to do so before a user will share the NP Standard Pro Bass or NP Ludwig Bass kits with you. You can search the forum for more information about these kits.

Is your head hurting yet? But wait, there’s more.

if you don’t have the NP Standard Pro Bass kit, you can still play the song with a substitute kit: SUB-Std Pro SWN Bass 62-91 kit which you can download, unzip, import and activate from Substitute Standard Pro with Bass kits

Another tip: some users have set up their songs to start with a double-tap in the BBM and the pedal. Phil’s songs use this method.

Eureka! That resolved it. I was trying to open a brand new project and uploading it there. I did as you suggested by opening up my existing project where i’ve downloaded numerous sngs from BB website and loaded Phils list there. It worked (it has the drumset list)

Good thing too… You right about my head about to explode. I’ve had my BB for about 5 years and love it. But there are times I can’t wrap my head around the BBM software methodology.

Thanks Persist… I really appreciate your help on this.